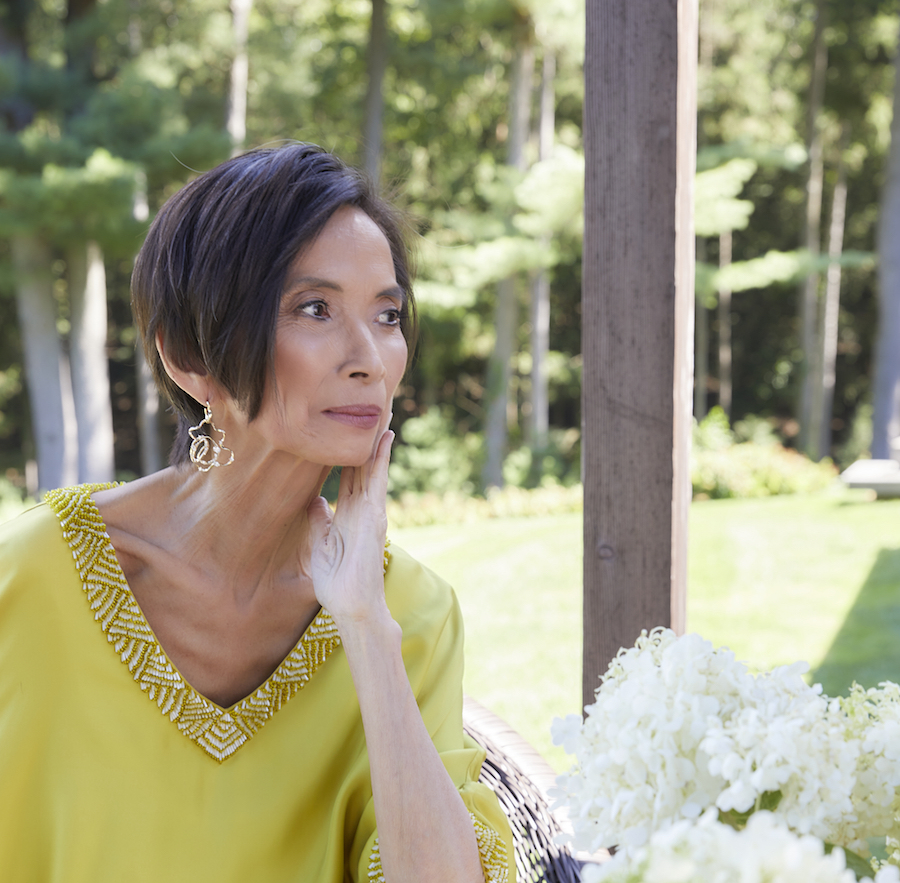 The intimate story of Josie Natori

Say the word “designer,” and Josie Natori will balk at you. Even as the founder, CEO and chief creative officer of a company that has been setting cross-category fashion trends for more than 43 years, she has higher aspirations.

“I don’t want to be remembered for fashion,” she said with a laugh. “It’s a means to an end [so] I can make a difference.”

For Natori, making a difference begins with her commitment to women and her admiration of philanthropy, something she says is “embedded” in the culture of the United States. She is on the board of the Asian Cultural Council, the Orchestra of St. Luke’s and the Statue of Liberty-Ellis Island Foundation (which built the Statue of Liberty Museum), and she is a member of the Council of Fashion Designers of America and The Committee of 200, among others. But despite her wishes, the world will certainly have a hard time disregarding her pioneering intimate apparel, her ever-evolving brands and her luxurious, effortless style.

Josie Natori’s first brush with fame came when she played with the Manila Philharmonic — at age nine.

“My mother forced me to play the piano — literally, I think she tied me to the piano at four years old, five — I had to practice. I was doing recitals at six,” she said. “Being the first born and the oldest of 32 grandchildren, the oldest of six children, there wasn’t any question. You just did it.”

As unorthodox a teaching method as it may have been, the experience instilled her with a sense of discipline. Dedication and perseverance are also things she learned from her mother, father and grandmother during her childhood in the Philippines. Her father was a “self-made man” who built his own construction company. Her grandmother, Josefa, was also a hard worker who had a hand in everything from the pharmacy to the theater.

“My grandmother was an entrepreneur, a matriarch — she would work from 4 a.m. to midnight,” Josie Natori said, recalling that no matter what her grandmother was up to, she was dressed impeccably and the house was beautifully kept. “She showed me that you can be strong, but you don’t have to give up your femininity.”

When it was time to pursue her own dreams, Josie Natori (then Josie Cruz) broke from her role as the obedient child to move to the U.S., attend Manhattanville College and work in corporate finance. After nine years, she famously became the first female vice president of investment banking at Merrill Lynch, and her work helped her learn about business in the States.

The camaraderie of Wall Street in the 1970s was another perk; Josie Natori recounted the ease of doing deals on less than a handshake or phone call and relying on the word of her peers. The close financial community is what eventually introduced her to her husband, Ken Natori. But even with such success, Josie Natori found herself looking for another challenge.

“It’s a different kind of creativeness — deals and dealmaking,” she said. “I like that too, but I was missing the other side. The tangible side.”

Fast forward 43 years, and Josie Natori was facing a new kind of creative challenge. When the pandemic began to shut businesses down in March, Josie Natori was flying to Paris, France and Palm Beach, Florida, trying to shoot a spring collection. As a self-described “eternal optimist,” she hoped that the virus would end up being more like a seasonal flu. Of course, that isn’t how it went.

Like most company leaders, she and her son Ken Natori (the company’s president, named after his father) had to adjust their business priorities. Through Ken’s leadership, they shifted focus to e-commerce and direct-to-consumer channels. Luckily, some of the Natori categories — home goods, loungewear — have remained popular.

“It’s been kind of up and down the last few months,” Josie Natori said. “I am frankly a workaholic, and I like to see people in the office.”

If anything positive has come from the challenges of the last few months, it’s that it has reminded Josie Natori why she started her company and the importance of constant evolution.

“This validates what I have always believed has been the concept of Natori, what makes the brand what it is,” she said. “When we created the brand 43 years ago, I didn’t think about lingerie. It’s a way of dressing; it’s a concept of living.”

Josie Natori’s ability to rebound, rethink and make things work evokes a piece of advice she learned when she first began practicing the piano: “‘You never play the same note twice. You’re always trying to perfect the tone.’”

“What kept me going and not bored in this business is I’m always changing and evolving,” she said.

In some ways, her company has changed quite a bit since 1977. When Josie Natori first decided to take on a new challenge, she was more interested in building a business — an area she already understood — than a beloved fashion label.

She recognized that her point of differentiation would be bringing Filipino culture to the U.S., so she began by importing baskets and furniture. It wasn’t until she brought an embroidered top to a buyer that she began to think about intimate apparel.

The success of the Natori brand has a lot to do with the generations behind it. In the early days, Josie said, her husband Ken Natori pushed her to think big.

“Frankly, he became like the front person for helping me with the strategy,” she said. “He was always the one pushing. I mean, I was perfectly happy when I had the first million sales … I remember him saying some phenomenal amount and I said, ‘goodness gracious,’ because I didn’t think that way. …I was just chugging along.”

The senior Ken has since taken a step back, but the junior Ken has stepped in, armed with an MBA from Stanford and a deep admiration for his parents.

“I think in a lot of family businesses, the second generation can’t wait for the first generation to move on, but that’s definitely not the case here,” he said. “My mother started this company, and it’s frankly her biggest passion. As long as she wants to do this and enjoys doing it, she should have that runway do what she wants.”

Ken Natori also brought some digital expertise when he joined the company in 2007. He was the architect of the company’s e-commerce site, which has been a lifeline for Natori during the pandemic.

“I said to Kenneth — and I’m not here to flatter him — but I couldn’t have done what we did without — I mean, he just kind of mobilized everything. He’s very process-driven; I’m kind of shoot-from-the-hip,” Josie said.

“Working in a family business can be challenging. It’s great 90% of the time, and when it’s not, it’s incredibly complex,” Ken Natori added. “But one of the reasons that it works for us as a business: our interests and our skill sets are both complimentary.”

Ken Natori has been making an effort to celebrate his mother on social media, as many Natori customers connect with her on a personal level. The quality of their products are what have kept so many people loyal to the brand, he said, but the storytelling element — Josie’s personality, inspiring will and unlikely narrative — are what are engaging consumers today.

“Her ability to will her way to what she wants is mind-boggling,” he said. “She has a vision, a will and a way to achieve that vision through her will.”

The family commitment to the brand even extends to Josie’s mother, Angelita Cruz, who resides in the Philippines and who, at 96, is still “as sharp as a nail,” according to Ken Natori. With generations of formidable matriarchs preceding him, Ken has learned to fight for what he wants.

“The biggest thing would be to not settle. It’s very easy to settle just to get things done; she refuses to settle for anything. I think that’s a large reason why we are where we are today,” he said, referring to Josie. “Don’t accept anything less than perfection or what you want.”

Workaholism is something that also runs in the family; it’s a trait that she inherited from her father, Josie said.

“She has been in the office every day since mid-June,” Ken Natori said, noting that Josie’s work ethic has been essential to the success of Natori.

For Josie Natori, the secret to staying at the top of your game is twofold: finding something that you love and making sure that it challenges you.

“‘I’m fortunate that I am doing something that I love to do and that I can wake up in the morning excited, because I know what’s it’s like when you’re just doing your job,” she said. “I’m challenged by it. Do I like it to be this difficult? No, but I guess that’s part of the challenge.”

On the passion side of things, Josie Natori is glad to have a creative outlet. She is pleased to live in a time where women seem to be more individual about their style choices.

“The arts feed the soul,” she said.

She draws some creative energy from Audrey Hepburn (of course), who she admired growing up. She has also gained a lot of respect for Queen Elizabeth II since she watched the popular Netflix series “The Crown,” which details some of the historical events of the Queen’s life and reign.

“Wow, no wonder you see that resoluteness in her today,” Josie Natori said. “I have more admiration that [she] did that no matter what. It’s the crown that counts.”

But more than larger-than-life figures, Josie Natori is inspired by the creativity and savvy of young people, particularly young female entrepreneurs.

“I’m kind of in awe of young people,” she said. “Young people have this ability to come up with these new ideas.”

You can’t rely on the passion without the work ethic, though. The important thing for young dreamers, she said, is to take action to make an idea into reality.

“You have to have a vision of what you want your life to be,” she said. “To me, anything is possible. Where there’s a will, there’s a way. It doesn’t come to you; you have to work for it.”

This article owes a special thanks to Karen Bromley for all of her contributions as well as the Natori family.