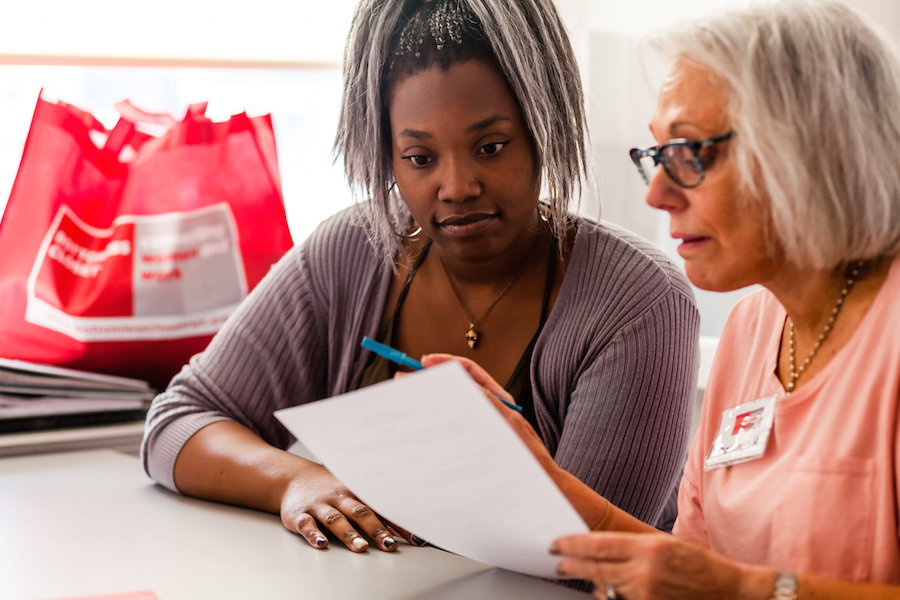 How Bottomless Closet left its lane to serve during the pandemic

When Melissa Norden stepped in as executive director for Bottomless Closet nearly five years ago, her first priority was expanding the boutique’s size offerings.

“It was really important to me that we make everybody feel like they have options when they come in,” she said. In those early days, she was both humbled and driven by the amount of need, especially by women who needed garments as basic as a white button-down shirt.

Since then, she has helped expand the organization’s size offerings to sizes 00-32 and shoe sizes 4-13, which encompasses more body types than any typical retailer.

Making all clients feel welcome essentially sums up the ethos of Bottomless Closet as a whole. The organization, which was founded 21 years ago, serves New York women by preparing them for job interviews — including their outfit.

“Our mission is to inspire and guide disadvantaged New York City women to enter the workforce and achieve success,” Norden said. “We do that by working with over 100 agencies across the five boroughs of New York City that are workforce development agencies. They range from homeless shelters to domestic violence victims groups, groups that work with the formerly incarcerated, the LGBTQ community, the city college system — all different communities of women in need.”

Bottomless Closet’s clientele is 83% women of color, about 50% homeless and about 50% single mothers. That means that when the pandemic hit, the organization saw its base take a huge hit, both financially and emotionally.

When the organization went virtual on March 16, its survey reported that 62% of its clients had lost their jobs due to the pandemic. That number rose to 68% in June, and Norden expects that it’s even higher now.

Before everything closed, Bottomless Closet had a tried-and-true method to help its clients. Partner agencies would help women get a job interview and then send those women to Bottomless Closet to prepare. After they were paired with a volunteer career coach for a one-on-one appointment, they would select an interview outfit from the boutique. Then, their coach would help them start building their résumé.

“The reason we actually start in the boutique is because the clothes part is the soft part, right? So, women develop conversations when they’re trying on clothes, and that really puts them in the right mood,” Norden explained. “These women are from backgrounds where they don’t trust a lot of people, and they’ve also been to many government agencies for public assistance, things like that, where they’re treated like a number. And just treating someone differently will cause them to open up.”

The “secret sauce,” as she called it, was individualizing each appointment. That way, career coaches could help build trust and find out exactly what the client needed.

“If you’ve been formerly incarcerated, for example, you don’t have to tell us that. But if we know it, it could help us better prepare you for your job interview. We’ll really tailor the appointment to what we know about the person and their background,” Norden continued. “So if we know, for example, that you’ve been formerly incarcerated, we’ll ask you what jobs you might’ve had in prison that you could actually put on your résumé.”

Women also tend to downplay their skills, Norden noted. The individualized approach is meant to help the career coach find relevant skills that the client might not have considered.

“Talking in the dressing room, you may get from a woman that she has a deaf child. And when we look at her résumé, the first question that will come up will be, why didn’t you put that you’re bilingual? You communicate with your child through American Sign Language,” Norden said.

The in-person meeting would also included interview prep, which helped clients practice the “intangibles” — such as shaking hands, making eye contact and projecting confidence — in addition to receiving tangible help, such as clothes, accessories, shoes, a haircut and a manicure.

That process resulted in 58% of interviewees getting the first job they interviewed for and 25% of the remaining clients earning the second job. And whenever someone got hired, they got to ring the bell in the office.

“That’s one of the things I miss the most right now,” Norden said. “It’s great for the person ringing the bell, but it’s also great for the people who are sitting and waiting who might not have had a job in many years, and they see someone from their community who has made it.”

After that, the support continued; the person hired would get to return to the boutique to pick out a work-appropriate wardrobe and have another one-on-one meeting, where a coach would help them plan details like childcare, route to work and Metrocard fare.

Since the pandemic, Bottomless Closet has been trying to continue that support by making check-in phone calls, distributing hygiene bags (with toothbrushes, toothpaste and tampons), giving away some laptops and expanding its workshop offerings. Previously, the workshops were focused on financial management, professional development and personal enrichment, but recent months have created a need for webinars on workers’ rights, landlord-tenant relationships, how to interview over the phone or Zoom and how to access public services and unemployment benefits.

“A lot of non-profits step outside their lane to respond to a crisis,” Norden said. “The truth is, we were meant for this moment.”

Norden added that even though women make $0.80 to the dollar compared to men on average, that number is significantly lower for women of color: $0.63 for African American women and $0.54 for Latina women — and that’s pre-pandemic.

A LITTLE HELP FROM FRIENDS

Before Norden’s tenure, much of Bottomless Closet’s inventory was purchased; now, it’s entirely donation-based. The new system was made possible by her drive to establish corporate partnerships, which Norden had practiced throughout her tenure in the non-profit sector, including a stint with the American Society for the Prevention of Cruelty to Animals (ASPCA).

The organizations corporate partners range from small companies to giants like Morgan Stanley, Deloitte and L Brands. Online-only shapewear brand Shapermint recently pledged $50,000 in undergarments. One company that has gone above and beyond is M.M. LaFleur.

“We really look for companies that are philosophically aligned with us, and they are all about empowering women and building their confidence,” Norden said, referencing the professional-wear brand.

In one memorable joint campaign, M.M. LaFleur offered to pay the postage on donations sent to Bottomless Closet, which quickly turned into 2,000 boxes of all sizes in Norden’s office.

“I called the CEO and I said, ‘I’m so sorry it was so successful! The postage must have cost you a fortune!’ and she said, ‘I don’t care what it costs; it’s the right thing to do, and it’s the right place to go.’ I’ve worked with corporate partners my entire non-profit career, and I’ve never had anybody say that,” Norden said.

Just before the pandemic, M.M. LaFleur also gifted every woman running for office in the United States an outfit. But since you can’t send gifts like that to candidates, the brand decided to call them “loans,” asking that candidates return the outfits to Bottomless Closet once they were done.

Rep. Alexandria Ocasio-Cortez applauded the campaign on Instagram, writing, “When I was running for office (even now!), accessing clothing for the job was a challenge both logistically and financially,” Ocasio-Cortez wrote. “As a candidate, a large part of asking people to vote for you is helping them visualize you on the job. As a member, that professionalism helps you challenge subconscious bias.”

“We realized, we could have the outfit that’s being worn by a future president! Like, how awesome is that?” Norden said.

But for Norden, it’s more about the individual successes. One woman who sticks in her mind is Rose, whom she met in her initial days at the organization.

Rose immigrated by herself even though she was older, Norden continued. She was in a wheelchair, and after she stopped being able to work because of her illnesses, she ended up in a homeless shelter for seven years. In that time, though, she still came to every Bottomless Closet workshop. Eventually, she got a job at the Veterans Affairs office and became a citizen.

“You put yourself in her shoes and you’re like, I couldn’t have done that, alone in this country, older, not a native speaker, with two kinds of serious illnesses … I would not have the wherewithal to do that,” Norden said.

It’s extremely humbling, Norden said, to see that kind of need and to be able to help.

“A lot of stories that I’m most impressed by are the people who came in applying for a very junior-level role and, due to the experience at Bottomless Closet, they end up coming out with a manager’s job,” she added. “Because we gave them the confidence that they could do it.”

To continue to reach their clients, though, Bottomless Closet needs more clothing — especially in plus-sizes — high-quality purses and bags and coats for winter. Hopefully, Norden said, they will be able to step up their distribution soon, though it mostly depends on pandemic restrictions.

Another possible option is to establish a mobile or satellite boutique to reach clients who face the barrier of transportation or finding child care, Norden said, though the organization lacks the resources to execute it at this point.

Regardless of location — or even physical presence — Norden hopes to continue to support clients in this time of great need.

“I’ll never remember what anybody left our office wearing, but I’ll remember the look on their face when they left,” she said.