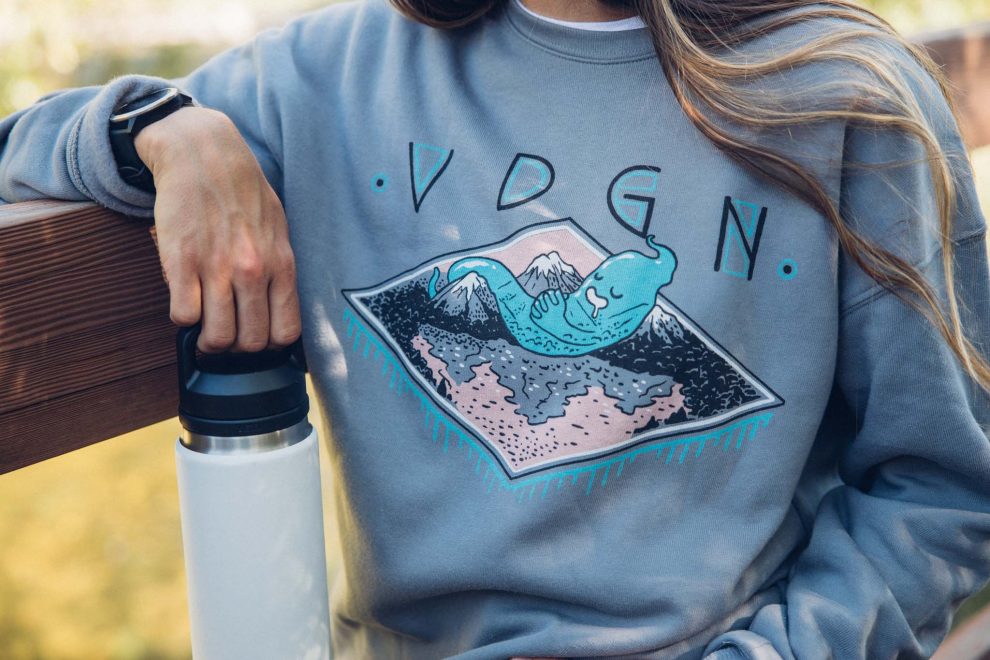 How to fight a pandemic with elevated graphic tees & outdoor adventures

If there’s one thing we’ve all been thinking lately, it’s: let’s get out of here. Whether you’re referring to your own living space or the state of the world in general, you’ve certainly be craving a sweet escape. Jared Ingold, founder and CEO of Vardagen, can relate.

Vardagen is based in Los Angeles and Indianapolis, Indiana, but Ingold has been traveling around in a Sprinter van lately. His adventures throughout the U.S. have inspired Vardagen’s latest collection, “Keep Going,” a literal and figurative nudge to hang in there. Here’s what he had to say about the collection, his travels and how he’s making the best of things.

In three words, how would describe Vardagen’s overall aesthetic?

Casual, creative, cool (but not really, I just needed a third word that started with a “c”).

We just had to “get out” and felt like that was a feeling that a lot of our friends were expressing. I’ve had the idea in the back of my head for a while. We had made some outdoorsy stuff years ago, and I’ve wanted to bring that back at some point, but this just felt like the right time.

Tell me about the outdoor adventure that inspired the collection.

We’re not exactly climbing mountains and spelunking through never-been-discovered caves, but we’re out, seeing new places. We went from Indiana to a lake in Iowa to a resort in Minnesota to a lake house in the Northwoods of Wisconsin to campgrounds in the Black Hills, South Dakota. From there, we explored Yellowstone and the Grand Tetons, spent time in Jackson Hole and then found a small ski resort on top of Bogus Basin in Boise and stayed there for two weeks.

We wake up in beautiful places and find amazing hikes, hot springs, people and animals along the way. We had no idea if we’d love traveling this much, but so far, it’s been incredible. We have so much freedom to stay or go as we please.

What do you find most inspiring in nature (be it plant, animal, fungi or natural formation)?

I would say natural formation from that list, but I’m more of a big picture kind of guy, so I’m looking at the landscapes more than the details in a plant. I have a crazy ability to spot an animal anywhere, which is an ongoing joke with my friends, and I know almost nothing about plants except that the ones that look like Christmas trees stay green.

Do you think the idea of escape is especially appealing to people at this moment?

For sure; I think people feel trapped and dream of escaping, and our family definitely felt that way. RV sales are through the roof, and people want to be in a place where they’re not constantly bombarded with current events.

What is your favorite design from the Keep Going collection?

Definitely the “Keep Going” hiker. My great grandpa lived to be 108 years old and lived by himself until he died. I just like the tough, hard-working feel of it, and it makes me think of him.

This collection is coming right after your PNDMC capsule; what were some of the themes of that collection?

We started off with “Sudsy Saint,” which says “Wash Your Hands, Sinners,” and then we played around with other themes, like “The Great Wipeout” (people hoarding toilet paper and essentials) and “Quarantiger” (people’s obsession with Tiger King and binging shows during quarantine).

My personal favorite, though, was “Get Antisocial!” It fulfilled an idea I had a long time ago of a T-shirt inspiring a song and music video. I think way too much about the plight of graphic tees and how abused they are by everything, and instead of a shirt inspired by a movie or a band, I wanted to flip it around. We made a punk rock shirt, “6 ft away or 6 ft under,” and then tapped my brother-in-law to write a song. We also made a music video to go with it, which (in my opinion) is a better way to spend quarantine time than consuming Netflix.

There are (obviously) many people impacted by the pandemic; why did you decide to give 20% of the proceeds of the collection to freelance creatives?

I have a lot of friends that are freelancers, and I just hated the situation that they were in. They were losing all their projects but didn’t have any of the protections that employees have, so I felt like this was a demographic that was being overlooked. I also followed closely with what Congress was working on for stimulus, and the help that freelancers needed wasn’t going to come fast enough.

Given the collection’s outdoorsy lean, are you making any additional efforts to make it environmentally-friendly?

We’ve always worked to make our processes eco-friendly, and we’ve kept our shop that way for the last decade. We use water-based inks and soy-based chemicals in our shop. There’s not a lot more we can do, but we have recently explored vegan inks. We think most of what we use are vegan already, but we’ve reached out to suppliers to get clarity on some of our pigments.

Since we own our own print shop, we’re able to produce in small batches and make sure we don’t overproduce and create a lot of waste. We still end up with misprints in our shop and have done some projects in the past to reuse them (ie: we made shopping bags out of misprinted tees).

What can your fans look forward to in the coming months?

We were really getting into a nice groove with dropping new things every other Tuesday (T-shirt Tuesdays), but that kind of fell apart with us scrambling to keep things afloat during the shutdowns. We really felt like we should abandon our planned drops and create the PNDMC collection and then afterward “Keep Going.” That means there’s a lot of cool things that never got released. We’re trying to get all of that ready so that all those products will be released by Black Friday.

Is there anything else you wanted to talk about?