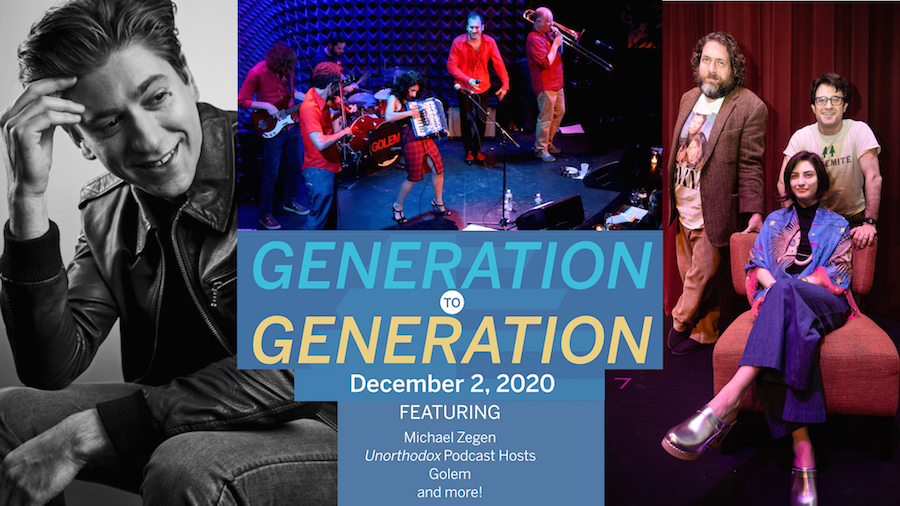 The Museum of Jewish Heritage – A Living Memorial to the Holocaust will honor Howard and Elyse Butnick and their family at the annual Generation to Generation event on Wednesday, December 2. The virtual event also will include an interview “The Marvelous Mrs. Maisel”’s Michael Zegen, the grandchild of a Holocaust survivor, by Tablet Magazine Deputy Editor and Unorthodox podcast Co-Host Stephanie Butnick and a performance by the New York City-based, klezmer-rock band Golem.

For decades, the annual L’dor V’dor, Generation to Generation event has brought together survivors and their families and friends to commemorate those who were lost and to look toward a future of hope and renewal. The benefit supports the Museum of Jewish Heritage’s timely mission to fight bigotry and antisemitism through lessons of the Holocaust.

Generation to Generation will be held virtually to support the Museum, located in Battery Park City. The benefit will begin at 7:00 p.m. EST streaming live on YouTube and Facebook. To RSVP and contribute to the event, click here.

Howard and Elyse Butnick have been active supporters of the Museum of Jewish Heritage since its inception. Howard is presently a Trustee of the Museum and chairs the Marketing committee. Howard grew up in Forest Hills, Queens, with his brother Joel, and they worked alongside their parents, Milton and Dora Butnick, in a family hotel and real estate business. Milton and Dora, like many of their fellow Holocaust survivors in New York, were very philanthropic and cared deeply about Holocaust remembrance. Now, Howard and Elyse’s children, the third generation, Stephanie and Francesca, along with their growing families, have continued the critical work of remembrance.

Stephanie Butnick is the deputy editor of Tablet Magazine and a host of “Unorthodox,” the No. 1 Jewish podcast on iTunes. She and her co-hosts published “The Newish Jewish Encyclopedia: From Abraham to Zabar’s and Everything in Between.” Stephanie has written for The New York Times and The Wall Street Journal and hosts GENerally Speaking, an interview series with fellow grandchildren of Holocaust survivors through the Museum of Jewish Heritage.

Michael Zegen can currently be seen starring on the critically acclaimed Amazon series “The Marvelous Mrs. Maisel” created by Amy Sherman-Palladino. The series recently won a 2020 SAG Award for Outstanding Performance by an Ensemble in a Comedy Series and the 2018 Emmy Award for Outstanding Comedy Series, among many other accolades. Previous television includes his standout role on HBO’s “Boardwalk Empire,” as well as television arcs on “The Walking Dead,” “Girls,” “How To Make It In America,” “Happyish” and all seven seasons of “Rescue Me.”