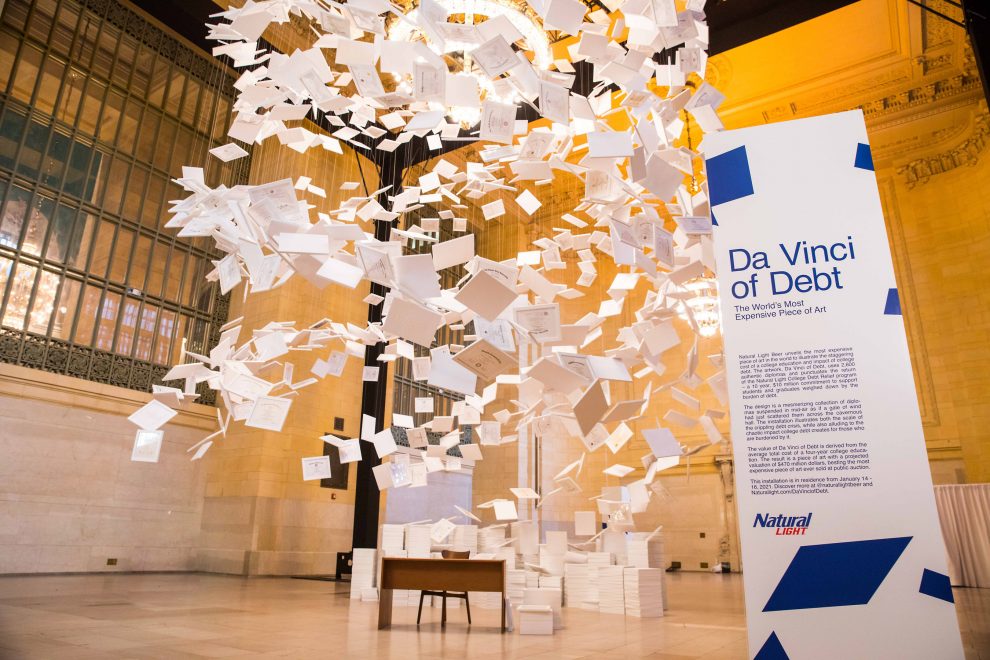 An artwork installed at Vanderbilt Hall in Grand Central Terminal has been named the most expensive piece of art in the world. The work, called “Da Vinci of Debt,” was created with 2,600 authentic college diplomas provided by graduates across the country.

“Da Vinci of Debt” coincides with the return of the Natural Light College Debt Relief program, which launched in 2018. Each year, the program provides $1 million to help people who are weighed down by the burden of debt.

“The art world is filled with absurd price tags that most people find impossible to justify,” said Daniel Blake, vice president of value brands at Anheuser-Busch. “That’s what made it the perfect medium for this campaign. It’s a very fitting analogy for the outrageous cost of attending a typical four-year college. Through ‘Da Vinci of Debt,’ we hope to inspire action around the college debt crisis and drive more fans to enter for a chance to have the Natty College Debt Relief Program pay down their student loans.”

The value of ‘Da Vinci of Debt’ is derived from the average total cost of a four-year college education. The result is a piece of art valued at $470 million dollars, besting the most expensive piece of art ever sold at public auction. “Salvator Mundi,” a 600-year-old Da Vinci painting, sold for $450 million in 2017.

The design of the artwork is a collection of real diplomas, suspended in mid-air as if a gale of wind had just scattered all 2,600 of them throughout the cavernous, 6,000 square foot space at Grand Central Terminal’s Vanderbilt Hall. The design is meant to illustrate both the scale of the crippling debt crisis while also alluding to the chaotic impact college debt creates for those who are burdened by it. Each diploma was carefully molded in place and suspended using an intricate network of cables.

With U.S. college debt snowballing to a record high of $1.7 trillion in 2021 in total debt and the average graduate paying over $180,000 by the time their diploma is in hand, Natural Light is calling on the deep-pockets of the fine art world to view its exhibit and are open to entertaining bidders on the historic artwork.

“If it means giving more people the opportunity to enjoy the college experience without the debt that follows, we’re all ears,” said Blake. “Natty is dedicated to doing everything we can to provide real solutions to college debt, and if there is a serious bidder, you know where to find us… @naturallightbeer.”