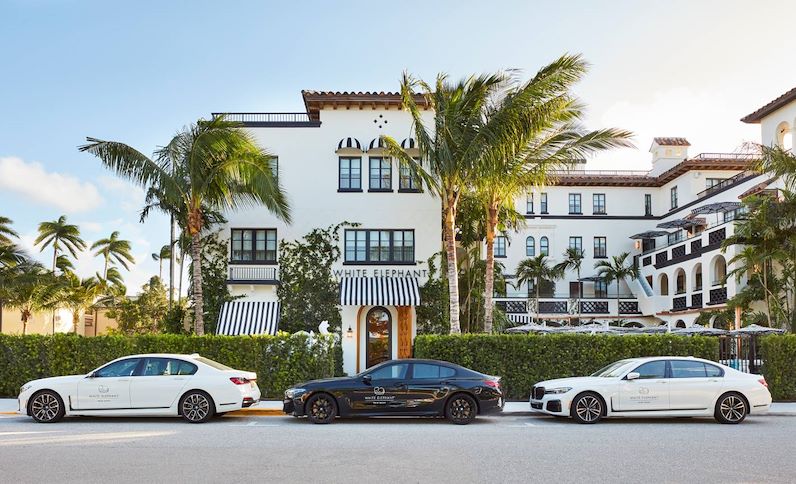 From the Gilded Age architecture and bustling art scene, to the pristine beaches and miles of bike trails, Palm Beach has been a longtime winter playground for those seeking sunshine. As travelers migrate south, they will be welcomed by the White Elephant Palm Beach, which opened in late 2020, plus a wave of new experiences, galleries and restaurants. Here’s what’s happening this season in America’s first resort destination.

Where to Stay
White Elephant Palm Beach is now open in a convenient spot just one block from Royal Poinciana Plaza. The 32-room property is housed in the former Bradley Park Hotel – originally constructed in 1924 as one of the first resorts on Palm Beach’s Main Street. The footprint of the structure and the facade remained, while the interiors have been stripped to the bones and rebuilt by Boston-based Elkus Manfredi Architects. Breaking from the bright pinks and greens that dominate the Palm Beach aesthetic, the White Elephant Palm Beach features a neutral color palette with sleek metal accents and vibrant pops of color. Rates start at $650 for a guest room and $995 for a suite.

Pop(-up) Art Takes Palm Beach
With many art fairs moving online this year, New York blue-chip galleries and auction houses are decamping to Palm Beach this winter with pop-up spaces. Pace Gallery opened with a program of solo and group shows slated through Spring 2021, while Acquavella’s Palm Beach outpost marked the brand’s first physical gallery outside of New York in its 99-year history. Sotheby’s 2,700-square-foot gallery is hosting monthly selling exhibitions of jewelry, watches and cars alongside design and art, and celebrating its 80th anniversary this year, The Norton Museum of Art just unveiled a large-scale renovation. Hotels are getting in on the action as well with the 130-piece art collection on display at White Elephant Palm Beach. Curated by the owners, the museum-worthy collection includes six prints by Yinka Shonibare, who will also unveil a new public sculpture installation in Rosemary Square this year; and Robert Rauschenberg, whose early creations in the 1950s anticipated the pop art movement.

Cycle in the Footsteps of the Founding Father of Mediterranean Revival Style
Addison Mizner, American resort architect, left a stamp on Palm Beach and most of South Florida with his Mediterranean and Spanish Colonial revival style. Between 1919 and 1924, he designed almost 70 structures in the area. In celebration of 100 years of Mizner, White Elephant Palm Beach launched a self-guided bike tour to explore the designer’s visionary work that still dominates the landscape. The experience includes complimentary Priority Bicycles for borrow and suggested routes past some of his most notable structures: Villa Mizner, the architect’s last home; Riverside Baptist Church, listed on the National Register of Historic Places; Villa dei Fiori, built by the Jell-O heir; and La Guerida, owned by the Kennedy family for more than six decades.

New Year, New Dining
As Northeasterners flock south so do their beloved dining institutions. Nantucket-favorite LoLa 41 by restauranteur Marco Coehlo opened as the on-property restaurant for White Elephant Palm Beach. The global bistro and sushi bar is inspired by destinations that the 41st longitude parallel crosses through, from Nantucket to Japan. La Goulue, New York’s Upper East side French bistro, opened its doors last fall while Le Bilboquet will debut on Worth Avenue in early 2021. Café L’Europe also reopened in November following a full-scale reimagining of the restaurant including new alfresco seating and hires from the Chez Jean-Pierre, a Palm Beach staple which closed after 29 years last fall.

Get Around in Style
Leave ride-shares in the past thanks to White Elephant Palm Beach’s partnership with BMW. Guests can be chauffeured into town in a 7 series or borrow the keys to take a spin on their own. For shorter trips, White Elephant Palm Beach also has a partnership with Priority Bicycles, allowing guests complimentary access to pedal around town. Take to the seas with Barton & Gray, a member-only yacht service, where guests of the White Elephant have the rare opportunity to charter one of their Hinckleys for a half- or full-day private cruise.

A Second Home
Whether sitting in class or taking a Zoom meeting, the remote lifestyle does not need to be boring with extended stay offers at White Elephant Palm Beach. Guests who book stays 30 days or longer will receive a 15% discount on the stay.

How to Get There
Nonstop flights are available into both Palm Beach and Miami from several U.S. cities including New York, Washington D.C., Boston, Dallas and Los Angeles. Palm Beach International Airport (PBI) also welcomed a number of new routes from across the U.S. JetBlue launched nonstop services from Los Angeles, Chicago and Pittsburgh, while United Airlines introduced flights from New York LaGuardia Airport, Boston and Cleveland.