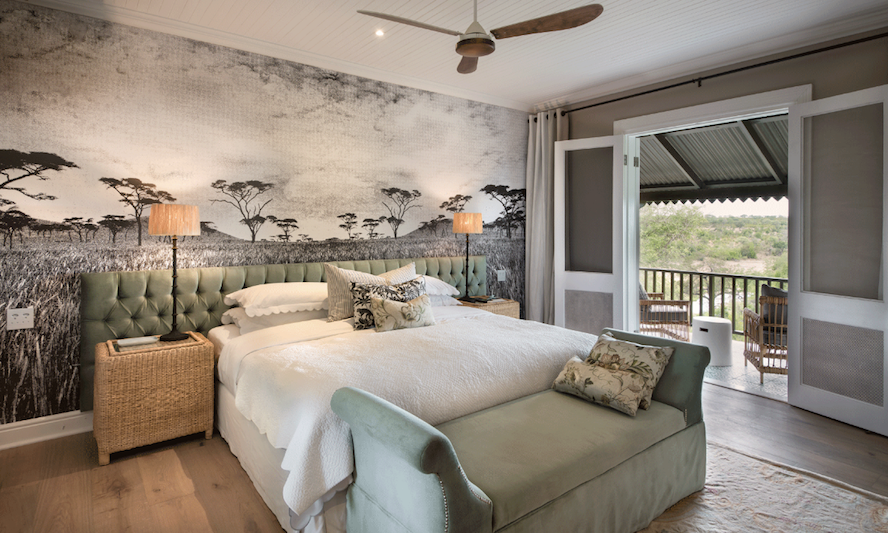 andBeyond Kirkman’s Kamp – part of conservation-minded andBeyond’s collection of 29 lodges and known for its unmatched leopard sightings – has just relaunched following a redesign of its cottages, public spaces, and dining and bar areas. Known for its nostalgic, historic look, the lodge retains its old-world character with a modern twist.

South African-based Fox Browne Creative, a long-time design partner of andBeyond, enhanced the 1920s ambiance of the lodge, which is housed partly in a 1920s homestead that dates back to a time when the Big Five game reserve was no more than a cattle farm. Maintaining the lodge’s rich history, the refurbishment adds a touch of glamour without altering its beloved style.

The camp’s 12 cottages have been redesigned to feature large private bars, outdoor seating areas, and wallpaper murals featuring a bushveld scene. Bathrooms have been entirely redone, adding extra-large showers and double vanities. The finishes are in keeping with the 1920s style: think embossed tiles, ribbed glass and marble.

The lodge’s guest areas have been refreshed with new furniture, lighting, and wooden floors to provide a warmer and more contemporary edge while retaining the classical feel. The lodge’s dining room has been entirely restyled, creating an inviting space with a coffee bar and additional dining areas. The lodge’s bar has always been a focal point of the property and its new look with an increased seating capacity allows guests to chat and share safari sightings and stories in the evenings while watching the barman prepare their cocktails.

The lodge’s guest areas were once the home of farmer turned conservationist Harry Kirkman, who the property is named after, and photographs, painting and other mementoes dating back to his time have helped to preserve the sense of stepping back in history. Modern furniture and accents have elevated Kirkman’s former home to a luxurious, yet authentic, frontier farmhouse feel.

andBeyond Kirkman’s Kamp is situated in the Sabi Sand Game Reserve, which shares unfenced borders with Kruger National Park. The reserve is famed for its intimate wildlife encounters, particularly leopard viewing. Game drives traverse an area of 26,000 acres and strict vehicle limits at sightings ensure the exclusivity of the game viewing experiences.