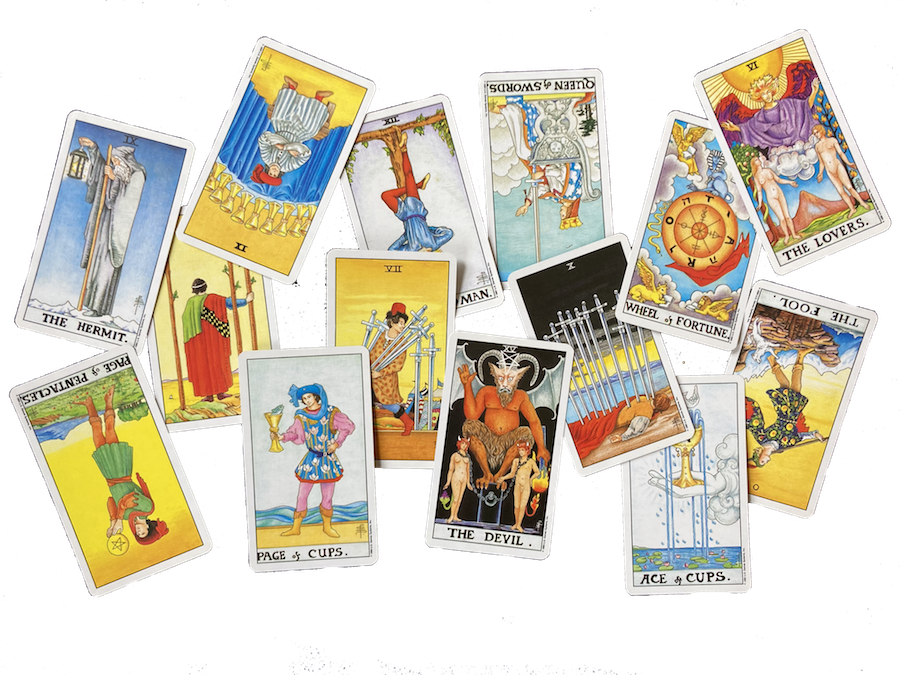 I read tarot for six of my good friends — spoiler: it was a disaster

It feels important for me to say is that I am not a psychic. In fact, I don’t think that there are such people, as fun as it might be to believe that there are.

I do, however, identify as somewhat of a fatalist, meaning that I think that the future is set. People of faith might call it predestination; others might call it a natural extension of Einstein’s Theory of Relativity.

But whether you believe in destiny or the power to determine your own path, it seems like everyone is intrigued by things that claim to be able to tell you your future — whether they want to scoff at it or take it as undeniable advice. Of this, I too am guilty, so it shouldn’t be a surprise that my first encounter with tarot cards hooked me.

It was at Thanksgiving 2018 when a family friend first offered to read my cards. She set up a card table with a table cloth and a few candles to set the mood.

“The only rule is that you have to promise not to pay any attention to what they say,” she told me. Apparently, in her days as a young opera singer in the City, she had taken up tarot as a hobby — until her friends began to make serious life choices based on her readings. That was when she stopped doing them altogether, she said.

My reading that night was gentle and appropriate and clearly easy to disregard, as I’ve forgotten most of the finer details; I would face some uncertainty in the coming months (true, as I was closing in on graduation) but that I would handle a series of dramatic life changes gracefully (also true, I like to think).

When my mom pointed out that the readings for my brother and me were strikingly accurate, our friend admitted that it is much easier to read for people you know. Intrigued by this challenge — that I could make up hopeful stories for my friends, many of whom were facing graduation anxiety — I set out to learn how to read tarot myself.

The first thing that I learned about tarot is that you can’t buy your own deck. Popular mythology suggests that this is very bad luck. Despite my all-fun-and-games attitude, I didn’t want to disrespect the tradition (or, potentially, any mystical powers of the cards beyond my comprehension) by disregarding the very first rule.

After my wonderful mother gifted me with a set, the next thing I learned is that each deck has 78 cards: 22 major arcana and 56 minor arcana. The major arcana are a genre of trump cards that have complex meaning and often some controversy about what they signify; they include figures like death, the high priestess, the sun and the moon, etc. The minor arcana are more or less a set of playing cards (with each suit containing a king, queen, knight and page, accounting for the four bonus cards). In fact, the four tarot suits — wands, swords, cups and pentacles — are somewhat similar to the hearts, diamonds, spades and clubs that we all know.

As a side note, I’d heard before that tarot cards were an ancestor of modern playing cards, but that seems to be a myth; tarot cards were actually used for a game (an old-timey version of bridge, pretty much) before Jean-Baptise Alliette assigned divine meaning to each card and became the first professional tarot reader in the 1790s, according to card brand Bicycle. The deck that most people know, the Rider-Waite deck, was first released in 1909.

I did end up reading for a few of my friends that year, though my complete lack of understanding for the cards and their intended meaning made it easy for me to make up whatever I wanted to tell them. I would occasionally reference the guide the accompanied my deck, but it was clear from the descriptions (and the girth of the book) that many of the cards, especially the major arcana, require dedicated study.

It wasn’t until 2020 — specifically, the week of the 2020 election — that I really felt the need to get serious about reading.

In the days leading up to November 3, I transformed my deck into a set of flashcards. I put a sticky note on the back of each one with a summary of the card’s meaning and reverse meaning (because they often have a different significance if they appear upside-down). I practiced reading cards for no one and connecting the narratives of one card to the next into a cohesive story.

In retrospect, it’s clear that part of my interest in relearning tarot (or, really, learning it for the first time)  came from the discovery that it was a pretty effective way to distract myself. After months of thinking, let’s get this over with, the night of the election became increasingly menacing with each day that it neared. Stuck between really wanting to know the future and very much dreading the future is apparently the ideal moment for tarot, especially if part of you thinks, well, this doesn’t necessarily mean anything anyway. Reading cards that predict serious illness or an untrustworthy/volatile man turned out to be much easier than sitting with those realities.

So, sitting on my living room floor with a glass of red wine and my laptop streaming election results, I decided it was time to try the real thing. I asked three of my closest friends if they wanted a virtual reading to take their minds off of the vote counting, and they all agreed. I laid out two conditions: they had to agree that none of this was real or meaningful, and they couldn’t ask about the election itself.

The first friend asked about her love life. In a move that I suspect is not kosher for tarot, I chanted her name into the otherwise silent void of my apartment to try to “instill her essence” into the cards. Apparently this worked, though, because her cards indicated that self-doubt and illness (go figure) were preventing her from finding the right person. In an unexpected and somewhat darker turn, her cards also said that she was in a situation of false merriment, where she was pretending to be happy while internally suffering. That was the truest part, she told me, because at that very moment, she felt at odds with her roommates, who were hoping for a different election outcome than she was.

My second friend asked outright if she would marry her boyfriend, and I told her that she needed to focus on a more general question. Of course, as soon as I said that, her first card indicated that her reading would answer a question specific to marriage, and that felt like the strongest sign throughout the entire experiment that the universe might have some kind of hand in this game, if only a comical one. Sadly, her cards said — quite explicitly — that she was involved with a dishonest man and that she would follow the path of her talents and career rather than finding a proposal in her future. (My apologies to her boyfriend, who I actually find quite lovely.) Thankfully, we could always fall back on the first condition of the reading.

Finally, I read the cards of my third friend, who just wanted a general life reading. Her cards said that she was about to lose a strong male presence in her life, causing her significant pain, but that she would at least come into a bit of money (specifically, inheritance) in the near future. Her grandfather (who, coincidentally, heard from a fortune teller as a child that he would die at age 84 — his current age) has been suffering from some health issues lately, so I was happy to fall back on the “none of this is real” excuse yet again.

I was able to partially comfort myself in the face of these depressing readings with the fact that, since these were three of my best friends, it was easier to see relevant information in the series of pictures in front of me. And — again — it was just a game. But what surprised me about these three readings is that each person latched onto something that they felt was undeniably true. Whether the card they fixated on was part of the overall takeaway or something peripheral, each person revealed a preoccupation with some part if the reading (despite the first condition).

This, to me, is the real power of tarot: introspection. Perhaps everyone has something they already know to be true that they can’t or won’t admit to themselves, and the reading is the outside “confirmation.” It seems to work in the same way that flipping a coin to make a decision — and then realizing in the air which side you hope it lands on — works.

I did three more readings for friends on the Thursday after election night (in the limbo of vote counting) which went somewhat similarly. All three of them got bad readings: one that she would lose her job, another that she was suffering from “female problems.” I predicted that my boyfriend was getting tired of a smart and youthful female presence in his life (presumably, me) and that he would soon leave her for an older, generous woman.

Again, most of the cards were greeted with bawdy laughter and the understanding that it was all meant in fun, but it was also hard for everyone to completely ignore their whole prediction. There was always one or two cards that seemed to be the thorn, the tiny grain of truth that had to be taken seriously. I had a friend tell me once that for a joke to work, there has to be something at the core of it that the audience agrees is true. I think that might be the best analogy for tarot, too.

Several days after the election results were announced, the friend who got the “don’t marry your boyfriend” reading sent me a poem that she wrote about her cards. It was about the election and division and a more nationally-recognized dishonest man, and it was stunning. She took something that seemed to foretell doom and crafted it into something hopeful and inspiring.

So maybe there aren’t psychics (in fact, I stand firmly on that conviction). Maybe there is, and maybe there isn’t, some way to know what our futures hold. But I would argue that tarot isn’t about knowing what’s ahead; it’s about understanding your present and listening to yourself. It’s about facing possibilities and trying your best to make the right choices with what you have. And when we let ourselves practice those things, even without a tarot deck, the challenges of reality may seem a little more surmountable.