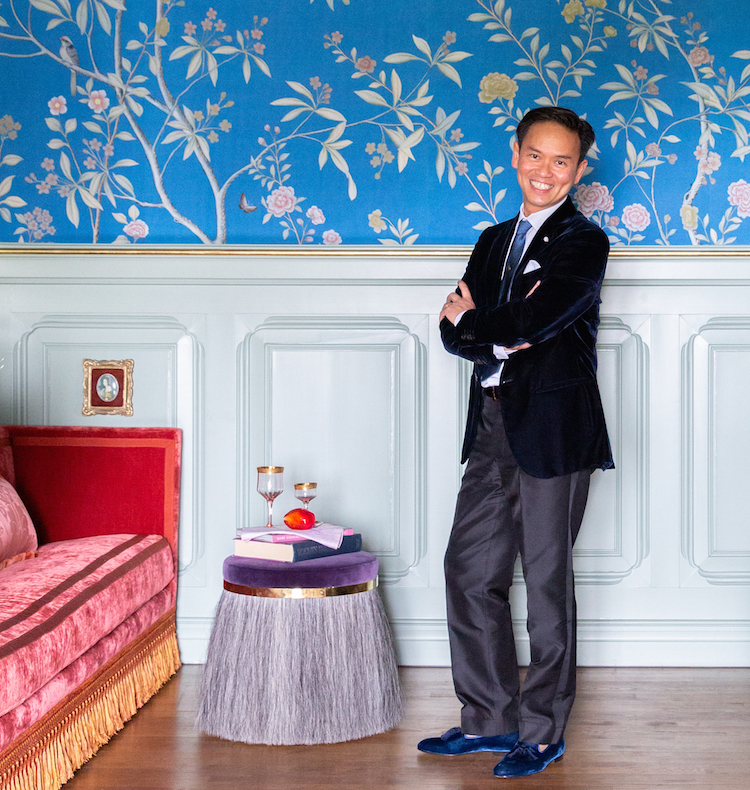 But let’s back up. By the time Rachman decided to release “The Garlic Peanut Story,” an epistolary memoir about his relationship with Wewe, he had already exceeded his wildest dreams for his career.

“My hashtag is #MyUnplannedLife because I didn’t plan to be an interior designer,” Rachman said. Though he was born in the Lampung province of Sumatra, Indonesia, he has hardly stayed in one place long enough to call it his home. From his education in Switzerland to time in Paris, France and San Francisco, California, Rachman identifies as a global citizen. “The Earth is my home. I travel so much,” he added.

Before he had even considered trying interior design, Rachman studied hospitality and fashion design. He was mentored by Gladys Perint Palmer — the first of many big names who he came to know on a personal level. Despite his education, though, he struggled to find fulfillment in either the corporate world or the non-profit world, which he called “too political.”

“That was a miserable part of my life,” he said. “I hated corporate America, because in Europe they give us like four to five weeks vacation, and in the U.S., you have to finish a year — maybe they’ll give you a week. Maybe. And I’m sorry, that’s like, inhuman.”

So, with signature Rachman confidence, he left to start his own flower shop with his now-husband (then a psychologist) in Pacific Heights.

“The flower experience I had was as a child — I grew up on a ranch — my dad spoiled my mom by having her own gardener and landscaper,” he explained. Other than that, it was an entirely new frontier.

“I always say yes when I’m offered something, and I figure out a way to make it happen,” he said. “For me, my quote is, ‘Life is like a parking spot. You have to seize the moment.’”

Sure enough, when the moment arrived, Rachman was able to make it count.

“Long story short, my employee was delivering flowers — and by the way, my flower shop was in front of a hair salon — and out of the blue there are like six or eight people that came into the room, talk[ing] me out, just chatting away, and at the end, this guy said, ‘I want to hire you,’” Rachman said. “So his manager or PR person or whoever stayed behind and said, ‘Do you know who that was?’ ‘I have no idea,’ I said, ‘I’m so sorry, and what am I supposed to do?’ And she was like, ‘That was Marc Jacobs.’ And essentially, I was hired to do his flagship store.”

It was the first of many larger-than-life opportunities to come Rachman’s way. As people got to know him, they started to ask for input beyond the floral arrangements.

“Besides flowers, I did, like, who sits next to who [sic], the lighting, the food, the atmosphere, the decor,” he said. Eventually, a chain of recommendations and Rachman’s philosophy on saying yes led him to design entire houses and palaces. But to imply that Rachman just goes with the flow, accepting opportunities as they come, would be misleading.

“Just because I have not planned my life doesn’t mean I’m not a neurotic, O.C.D., insane person. I am,” he said. “I’m super organized; I’m that Type-A personality; I’m a go-getter.”

Rachman gleefully told an anecdote about getting a project on an airplane (noting that flying is one of his favorite activities).

“If you want me, girl, I only want to work comfortably, and I require first class,” he said — which is how he happened to sit next to the wife of the U.S. Ambassador to Austria. “This was the first time I joined the mile-high club — not what you think! But I basically was hired to design the 60th anniversary of the United Nations.”

Another one of his favorites is from when he attended a royal party in the U.K.

“The joke is always: when a lady calls the queen to show up, I do!”

The rest, as Rachman said, is history.

“My family — my past, my education — really shaped me,” Rachman said. As a gay kid raised by Christians in a majority-Muslim country, Rachman faced more than his fair share of hardships.

“Now you’ve seen my jet-set, globe-trotter lifestyle, people think I’m this glamorous person — which I am! What you see is what you get, I won’t fake it — but what you don’t know about my life is that I grew up in a Muslim country where just being different — simply by my ethnicity and my religion, which was already something else — but I was a sissy boy, so I was bullied.”

By his own telling, Rachman was physically, verbally, emotionally and/or sexually abused almost daily.

Before Rachman was born, Wewe, the biological daughter of the family’s chauffeur, was adopted by his parents.

“My sister was like my second mom because she was 10 years older,” he explained. “She had not a drop of hate in her. On the contrary, she was like an angel now, an angel on Earth then.”

Wewe was loving, vivacious and lively, Rachman said. As a young kid, he would wait eagerly for her to come home from school and drop everything as soon as he heard her come in the door. She would also bring him a daily treat: a garlic peanut square, the inspiration for his memoir’s title.

“Later in life, I learned it was the only pocket money that my mother gave her every day, and she spent it on me,” he said.

Wewe was always committed to bettering herself, Rachman added. She worked as a nurse and a midwife (often for free, helping those who could not afford to pay a doctor), and she eventually became an anesthesiologist. Then, tragedy struck.

“In all honesty, I didn’t plan to publish the book — again, my unplanned life,” Rachman said. “Sadly, my sister passed away over 14 years ago at the age of 46, and she left a son, who was only four at the time, and my niece, who was only six.”

Rachman realized that Wewe’s children needed another way to remember their mom, so he began writing and assembling his letters.

“I wrote this story because I want to help people. I want to share the message of love, of unconditional love for my sister, who protected me while I was abused.”

As it turned out, celebrating his sister and giving her children another piece of her was just the beginning of the project. In the process of remembering somebody so kind, Rachman was able to find the ultimate kindness within himself.

“It’s also a message of forgiveness; I want people to heal, even the people who have wronged me,” he said. “The perpetrators rely so much on our fear. By being fearful, we give them power. For me, forgiveness is power.”

Rachman credits a number of supportive mentors (mostly women, he noted) for helping him grow from his troubled boyhood into his success as an interior designer and author, but it all started with the kindness of one person.

“She’s not Oprah. She’s not Lady Di. She’s not Jackie O. But to me, she was all of them and more,” he said. “She has touched so many lives just by being herself.”

Hate, Rachman said, is taught. But Wewe understood the power of one human life, which can be used to better countless others and teach love instead.

“When she was dying of cancer, there was nothing I could do for her,” he said.

But just as she has given him the secret to “fitting in anywhere” in the world, he has given her — and her legacy of kindness — room to grow for years to come.