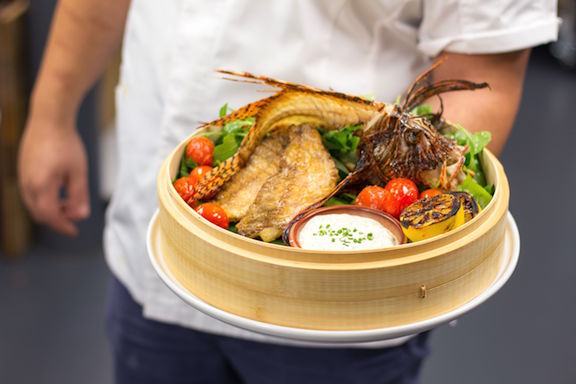 New Year’s Eve, 2020: as the world watched the ball drop, we all welcomed the start of a new year. But if there’s one thing we can all agree upon, it’s saying “good riddance!” to 2020.

Of course, the year’s overwhelming challenge was COVID-19 and the resulting health crisis, economic devastation, business restrictions and overall psychological impact. The pandemic affected everyone and every business, but the restaurant and hospitality industry was particularly hard-hit.

Restaurants whose main worries were juggling reservations, overbooking, long lines and overcrowded bars were suddenly faced with mandatory shutdowns, partial re-openings, social distancing and a plethora of new health and safety requirements. Some restaurants learned to adapt, developing new models and tactics, like contactless curbside pickup, outside delivery services and packaged ‘take and bake” meal kits. In fact, the pandemic actually benefited certain operations (i.e., pizza parlors) that were already ideally set for take-out and delivery, but it proved quite fatal for many others. As always, the Boca Raton/Delray Beach, Florida, market welcomed many new restaurants last year, but we lost even more. So, my fellow foodies, here again is your annual guide to our culinary comings and goings: the restaurant year in review.

NOW OPEN
The most exciting opening last year was in Delray Beach, Florida, with the long-anticipated launch of Lionfish, which took the former Luigi’s Coal Oven Pizza spot on Atlantic Avenue. Sporting a classic-meets-contemporary motif, inventive “modern coastal cuisine” focusing on fresh, locally-sourced and wild-caught seafood and a killer bar scene, Lionfish quickly became the go-to spot. Also in the aquatic arena is the Seafood Street Eatery, which opened on Yamato Road in February (just before the pandemic), filling the void for fresh seafood at affordable prices in a casual mom-and-pop setting.

Italian restaurants have historically dominated our market, and 2020 was no exception. Carmela’s opened in The Fountains Center in Boca Del Mar (replacing Mozart’s Café), presenting its seafood-forward, contemporary Italian menu (that also happens to be Kosher). That was followed by Pizzeria Sophia, a full-serve family Italian restaurant and pizzeria on U.S. 441 in Delray. But the vast majority of new Italian eateries were not full-service ristoranti but rather pizzerias and casual Italian operations specializing in take-out and delivery — reflecting, no doubt, the new norm under the pandemic.

To wit, Angelo’s To Go opened in Mizner Plaza (in the former Doughboy Donuts spot), with Chef Angelo Landi serving up some of the best real-deal, homemade Italian classics this side of Arthur Avenue for pick-up and delivery (with just a few outside seats). Even more indicative of the times, Chef Koby Wexler introduced his Detroit-style pan pizzas (a rare treat in Florida) with his Death by Pizza, available only for pick-up, only one day each week and only by online pre-order. An unlikely business plan indeed but, apparently, quite successful, as he continues to sells out. Other new pizza shops include Mama Sue’s Pizza & Wings on Northwest Boca Raton Blvd. and Aunt LuLu’s NY Style Pizza & Kitchen on North Hampton Drive. Also on the Italian menu is Joseph’s Classic Market , which opened in Boca Town Center (relocating from its former Boca Center locale), offering a wide range of prepared Italian foods to go in addition to its Italian market and grocery store.

As always, several Asian concepts also entered the fray. Most notable was the long-awaited return of The Blue Fish in Mizner Park in the choice space previously occupied by Rack’s Downtown Eatery. Long-timers may fondly remember The Blue Fish from its old Atlantic Avenue locale; unfortunately, it did not last long. On a different note, Tacowa Korean BBQ & Taco opened on East Palmetto Park Road in the former East Side Café spot, offering its unique fusion of Korean street food (i.e. bibimbap, bulgogi, kimchee) and Mexican tacos. Vietnamese food fans can now get their food fantasy pho-filled with the create-your-own pho menu at Dragon Pho, along with other Vietnamese specialties, from spring rolls to boba tea. Wok Boca opened in the Polo Club Shops with a traditional Chinese-American menu. On a more eclectic note, Hawkers Asian Street Fare introduced its veritable smorgasbord of various Asian street foods, including Chinese, Japanese, Thai, Korean, Vietnamese and Malaysian.

We also got a nice shmear of delis and cafes, including the January launch of La Boulangerie Boul’Mich, a delightful French café (difficult to pronounce, but easy to love) in Boca Town Center, with its delicious, artisan baguette sandwiches, egg creations, croissants and other French delights to accompany its stellar coffee bar. Carmela Coffee Company later opened on North Federal (replacing fellow coffeehouse R1 Coffee & Tea), offering a full coffee bar, along with sandwiches, salads, paninis and such.
Last year’s most prevalent segment continued the 2019 trend, bringing us even more fast-casual, build-your-own-bowl offerings. The concept is basically similar, with each place offering its own take on health-oriented bowl creations comprised of a variety of bases, proteins, toppings and sauces.

Check out CoreLife Eatery in Lakeside Centre (on Glades Road), with its healthy selection of salad and grain bowls and its unique specialty: broth bowls. On a more refreshing note, SoBol opened nearby in Boca Lyons Plaza featuring its delicious array of fresh-made açai and pitaya bowls, smoothies and Belgium waffles, along with a full coffee and kombucha bar. Zuco Juice Bar opened on Southeast seventh Street, bringing its healthy array of fresh-squeezed juice concoctions (made fresh to order or in grab-and-go bottles) to downtown Boca Raton, while Fit Fuel Smoothie & Coffee Bar introduced its smoothies and coffee bar to West Boca Plaza, along with crepes, sandwiches and salads. Bear’s Food Shack opened on North Federal in January and soon thereafter morphed into the Aloha Food Shack, combining all the above (grain bowls, açai bowls, poke, salads, smoothies, wraps) with tacos, breakfast wraps, a full bar and live entertainment.

Meanwhile, Greek and Mediterranean foodies can now fill their pitas at Olive U Mediterranean Grill in Park Place on North Military Trail. Olive U offers a similar build-your-own-bowl concept but speaks with a decided Greek/Mediterranean accent, with proteins like gyro, shawarma and falafel; bases such as pita bread, cinnamon rice and hummus and add-ons including tzatziki, hummus, baba ghanoush and stuffed grape leaves.

SORRY, WE’RE CLOSED
The restaurant business is notoriously brutal, with the highest failure rate of any industry. But the pandemic and its resulting shutdowns, job losses, economic hardships, remote working, loss of tourism and general health concerns brought an unprecedented level of restaurant closings.

Even some of the big, national chains fell victim. Most notably, Sweet Tomatoes’ wonderful Salad & More buffet was a perennial favorite and constantly busy. But the model was not conducive to pandemic dining, resulting in the demise of not only its long-standing Boca Del Mar shop but the entire national chain. Other big guns to fold their cards (locally, at least) include both Brio Tuscan Grille and Panera Bread in Boca Center, the Outback on Southwest 18th Street, Burger King in the Garden Shops and both Zinburger and Boston Market in Boca Town Center.

American-themed restaurants are always a major segment of our dining scene, but last year witnessed the loss of Burger & Beer Joint in the Delray MarketPlace, Smoke BBQ on North Federal Highway, Butcher Block and its sister Butcher Block Express in the Fountains Plaza and Charley’s Philly Cheese Steaks in Boca Town Center. We also bid a sad arrivederci to some Italian amici, including upscale Domus and Scuola Vechhia, the area’s only authentic Napolitano pizzeria, along with Anne Marie Bakery Pizza Café, Mama’s Pizza & Pasta and Joseph’s Italian Market.

Casual delis, cafes and sandwich shops took a particularly hard hit last year, due, no doubt, to the dramatic decline in lunchtime business from nearby office workers. I was particularly sad to see the wonderful JJ’s Café & Deli in the Garden Shops close. Long-time veterans Boca Breakfast Club in Royal Palm Place and Toojay’s in Polo Club Shoppes likewise bit the dust, along with downtown Boca newcomers East Side Cafe and Meet Point. Other fatalities include LocalGreens in Delray Place Center, both R1 Coffee & Tea locations and Toast Café, Beehive Kitchen, Bear’s Food Shack and The Tree Café.

The most tragic loss, however, was Stateside Sandwiches in downtown Boca. It did not close due to the pandemic but rather the sudden and untimely passing of Chef/Owner Steven Tart. Stateside Sandwiches was totally unique and simply incredible. Chef Steven was a kind, benevolent and generous soul with a true culinary gift and a sincere passion for the art, and he will be dearly missed.
Speaking of closings, we must pay homage to Skyline Chili in Ft. Lauderdale, Florida, which served its last three-way and cheese coney after fifty years. The iconic mainstay was one of the longest lasting restaurants in South Florida, and it was the very first place outside of Cincinnati with authentic, Cincinnati-style chili.

Even more heartbreaking was the sudden closing of the legendary Mai Kai. Mai Kai was a true national treasure (registered in the National Registry of Historic Landmarks). It garnered innumerable awards and accolades including and boasted the largest rum menu in the country. Mai Kai and its distinctive Tiki Hut structure stood as a distinctive landmark for over sixty years, making it one of the nation’s longest-lasting independent restaurants that owned its own land and building. Unfortunately, a massive roof collapse forced Mai Kai to shut down for renovation, but its future remains uncertain. Let’s hope and pray we don’t lose this cherished landmark.

Even though 2020 restricted and limited our dining options and led to the loss of so many restaurants, it also brought us a full menu of new restaurants — and new ways to enjoy them. And now, with the industry starting to recover, mass inoculation programs already underway, loosening of restrictions and tremendous pent-up demand, 2021 is starting to look very promising.

Kenny Spahn is a food critic, culinary columnist and restaurant authority. He also serves as president of Restaurant Placement Group, an exclusive recruiting and consulting firm for the restaurant and hospitality industry. Learn more at restaurantplacement.com.