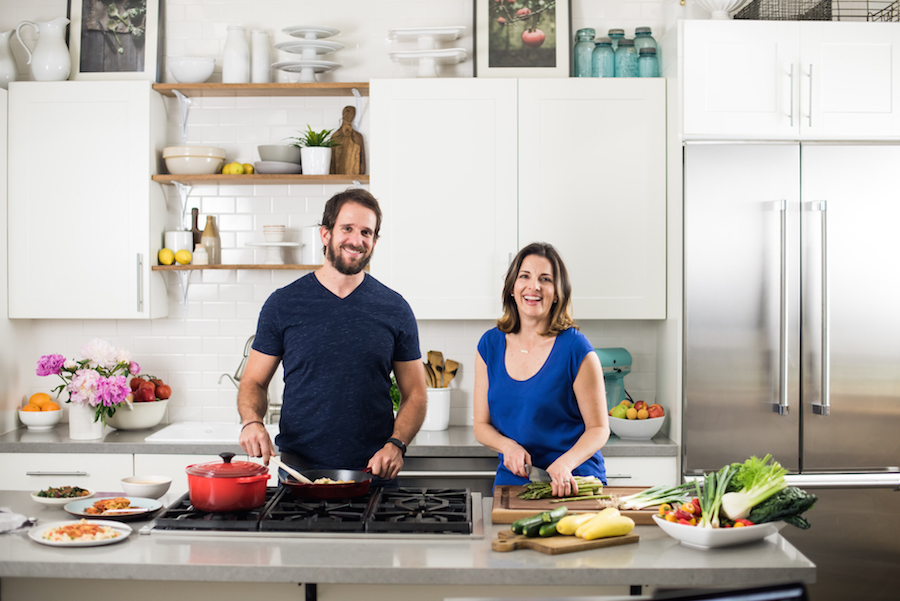 When most people hear the word “vegan,” they usually think of all the things you can’t eat. Brother and sister team Mark Fachler and Monica Klausner thought the opposite.

“Especially nowadays with so many vegan cheeses and vegan meats, there’s just no reason not to at least eat plant-based once a week,” Klausner insisted.

As evidence to that point, meet Veestro, an all-vegan, Kosher-certified meal delivery service. Veestro meals come frozen and can be reheated, either on the stove/in the oven or in the microwave, at your convenience.

Klausner, the co-founder of Veestro, got on board with founder and CEO Fachler when he came to her with the idea. Fachler was working as an investment banker, and since he worked long hours, he often resorted to ordering pizza or take-out for dinner.

“In your teens and your twenties, you can do that, and it’s not a big deal,” Klausner joked. “But in your thirties, it starts catching up to you.”

Fachler’s working diet was a far cry from the food he and his sister had grown up eating in Costa Rica. Their grandparents were holocaust survivors who fled Poland and Germany for the safety of Central America. Fachler and Klausner were born and raised there until they attended the University of Texas at Austin for college.

“When we were in Costa Rica, the fruits and the vegetables are so abundant there that most of our meals were made from plants,” Klausner said. “Meat was very expensive, so we’d eat meat maybe once a week, but the rest of the time, we’d eat fruits and vegetables and all the food made from scratch.”

“He wanted to get back to the way we were eating at home, but he didn’t have the time to do it,” Klausner added. “He thought it would be great for young business professionals, like him, who didn’t have any time.”

Klausner, who isn’t a big fan of cooking either, realized that the idea also worked well for moms who might be tired of eating their kids’ favorite macaroni and cheese every night.

You might not realize that Veestro is vegan if you just glance at their offerings; some of Klausner’s favorites include pasta bolognese, fajitas and chili. Upon sampling, my favorite was the country fried chick’n with mashed potatoes and gravy — a definite surprise. Part of the secret is Veestro’s executive chef, José Aramayo.

“He can literally take three plant-based ingredients and make something outstanding for you,” Klasuner raved. “The way that he combines spices and flavors is really fascinating to me.”

Fachler and Klausner discovered Aramayo when they were looking for a kitchen manager to cook some vegan recipes, and he offered to make improved versions. His gamble paid off, and Klausner and her brother came to like and respect him on a personal level, she said.

“He is from Bolivia, so he has a lot of the same background that we have in the way that we ate and the way he uses the spices and flavor profiles, and he is incredible,” Klausner added.

Aside from the culinary influence that her grandparents brought to their childhood kitchen, Klausner said that many of the meals she grew up eating were already vegan — rice, beans, plantains, picadillo vegetables. Once you have a plant-based diet, she said, you get to a point where you don’t miss animal proteins anymore. But the biggest reason to eat plant-based, for her, is health.

“It’s just a better way to tackle these lifestyle diseases than to tackle them with pills,” she said. “For me, that’s really the driving point, to get people to eat better and have a better quality of life.”

The health benefits associated with veganism can be complicated, since it is a diet that doesn’t necessarily cut out excess sugars or processed foods (Oreos, famously, are free of animal products). But eating plant-based proteins rather than meat does tend to lower your risk of heart disease and obesity, the Mayo Clinic found. Still, it’s important to make sure that all your nutritional needs are met in a plant-based diet, and that’s the tricky part for most people.

“It’s a tough thing to do when you don’t know what you’re doing, and most of us don’t know what we’re doing,” Klausner said. “Our hope is that everybody will try it, will eat more plants and will decide to become more of a ‘reduce-itarian’ — someone who eats a lot less animal products and a lot more plant-based products.”

The environmental aspect of veganism, however, is undisputed; the University of Oxford found that going vegan could reduce your individual carbon footprint by as much as 73%. For Klausner, that impact is “for sure a close second.”

“Obviously, I would love to leave this world a better place for my children,” she said.

And if you’re still skeptical about trying a plant-based meal, perhaps you’ll be more open to trying a Kosher meal that you don’t have to cook.

“People who are Kosher have to cook, pretty much all the time,” Klausner noted. “It was very important to us to have a Kosher certification because we wanted to reach the Kosher community with this product.”

Veestro is, so far, the only meal delivery service that’s Kosher certified, Klausner said, and that’s because the process can be incredibly long, complex and expensive. Not only does each meal need to be approved, but each component of the meal must meet Kosher standards, according to Orthodox Union Kosher Certification Service. For Veestro, that means there is someone in the facility every day making sure that all processes are up to standard. Still, it was a no-brainer for Klausner.

“It’s worth it. It’s definitely worth it for us. It’s more of a philosophical thing than a business decision,” she said. “We just wanted to cater to our community.”

As Veestro continues to attract healthy eaters and busy workers to their meals, Klausner wanted to make sure that everyone knows that they are welcome in that community.