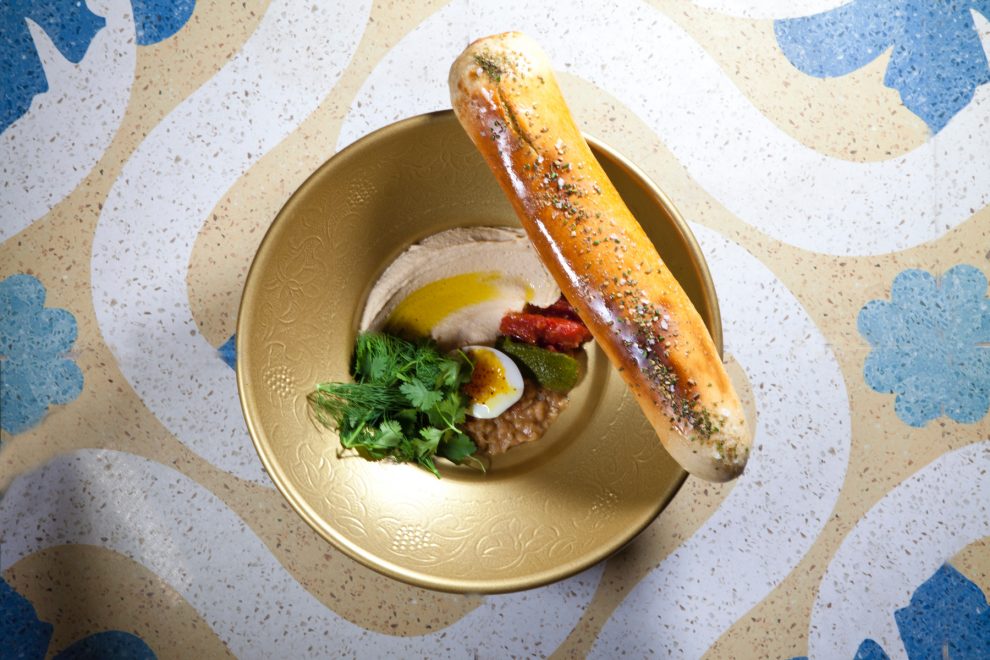 Named for the Phoenician and Philistine god of agriculture and earth, Dagon offers Manhattan’s Upper West Side a unique Mediterranean dining experience.

The inspiration for the ethos of the restaurant is taken from the Voice of Peace, an offshore radio station that broadcasted in the Middle East for 20 years from the former Dutch cargo vessel MV Peace. Its motto was, “From somewhere in the Mediterranean, we are the Voice of Peace.” Owners Simon Oren and David Sasson and partner Gil Ohana remember the radio station fondly and will pay tribute to it with the music in the dining space.

Executive Chef and Partner Ari Bokovza, most recently the culinary director of Casa Nela Group and executive chef of Claudette and Bobo, is of Israeli and Tunisian heritage. His background is reflected in his dishes, which are made with distinct, exotic spices with modern flair.

In true fashion of the restaurant group that also owns Nice Matin, Bouillon Marseille, Nizza and Barbounia, Dagon will have a world-class wine list and beverage program curated by Aviram Turgeman. The wine list will have approximately 100 bottles of wines from the Mediterranean, with some kosher options. Turgeman’s cocktails will use fruit juices, herbs and spices from the region, and for non-alcoholic beverages, he’ll serve lemonades, such as rosewater, lemon verbena and tamarind.

“It’s all about lemonade on a hot day in Israel,” Turgeman said.

The restaurant itself has a mod and homey feel with 1970s vintage wallpapers, light wood tables and chairs and banquettes with ivory and chocolate-colored cushions. With shades of greens and blues throughout, the feel is of a Mediterranean seaside home with glazed, Moroccan tile floors and wood-slatted ceiling that resembles shutters. The sun streams in from the large windows, which wrap around the vast corner space. There is a food bar that faces the open kitchen and a separate, three-sided cocktail bar. The restaurant can seat 135, with a main dining room for 100. Semi-private rooms upstairs seat 20 and 10, respectively.