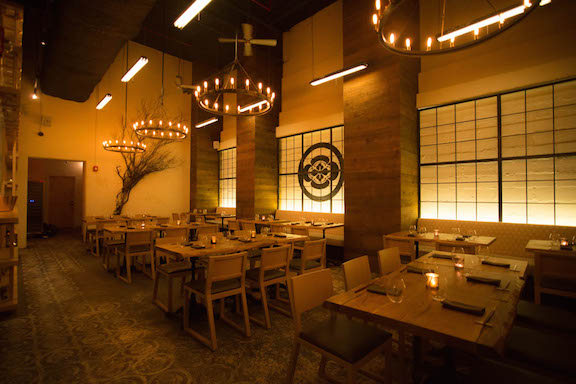 Mifune New York, the Michelin-recognized Japanese restaurant that focuses on modern Washoku cuisine, is now open for indoor or al fresco dining. The menu has been created by the restaurant’s Executive Chef tag team Yuu Shimano and Tomohiro Urata, both of whom have worked in three Michelin-starred kitchens, and will spotlight their signature style of using French techniques on Japanese food.

“French techniques can be universally applied to many types of cuisines,” said Mayumi Kobayashi, general manager of Mifune New York. “At Mifune New York, the French training of the chefs paired with Washoku cuisine is undoubtedly unique yet incredibly harmonious. The foundational techniques are built upon with a Japanese flair that has yet to be duplicated in New York City.”

The curated menu begins with appetizers like black angus beef tataki served with a ponzu sesame sauce and octopus frites served under a green bean salad tossed in a Japanese onion dressing and a roasted red pepper-yuzu kosho sauce. The vichyssoise is a chilled potato cream soup that is topped with a duck consommé gelée, served with potato crisps and adorned with caviar. House-smoked trout is a neighborhood favorite, and this rendition is served with a gribiche sauce, an emulsified mixture of hard-boiled eggs and mustard.

Main courses are featured with both Japanese and French influences in mind, inspiring dishes like squid ink seafood bouillabaisse rice, which is topped with a medley of vegetables and seafood, such as shrimp, octopus and clams, and speckled with dollops of creamy lobster aioli. Whiting tempura is the perfect summer fish dish and served with sauce vierge, made with olive oil, lemon juice, chopped tomatoes and chopped herbs. For steak lovers, the black angus skirt steak is lightly dressed in a béarnaise sauce with pomme frites maison.

Mifune New York also offers an 18-course tasting menu special for the adventurous eater. Dishes range from foie gras terrine with rhubarb ginger and house-made focaccia to octopus green bean salad. And if you don’t finish everything, Kobayashi said, the dishes are made to be reheated and eaten at home.
Since so few tables are open for the time being (due to pandemic restrictions), the menu changes every week and includes seasonal ingredients, Kobayashi said.

The menu pairs with mixologist Shingo Gokan’s signature cocktails, which are all named after Torisho Mifune movies.
“For those who may not know, Torisho Mifune is the famed Japanese actor praised for his emotional portrayal of disciplined and unmatched samurai warriors,” Kobayashi said. “Mifune New York is fueled by top young chefs displaying a level of refinement that would make [the restaurant’s] namesake proud. Just as Mifune himself crossed the ocean and captivated global audiences, this assemblage of culinary talent has arrived in N.Y.C. to provide a new take on Japanese cuisine.”

Some of the themed cocktail options include the Oharu (lychee-cello, Dassai 45 Nigori sake, grapefruit and orange blossom) and the Seven Samurai (rye whiskey, aged sake, East India, sherry, bitters and smoke). They also offer a selection of draft beers, wines and sakes.

“Mifune New York is such a popular destination because there aren’t many restaurants like us, especially in the U.S.,” Kobayashi added. “We aren’t sushi, ramen or the typical Japanese cuisine you would think of as an American. Not only is Mifune New York a marriage between French and Japanese food but a highly elevated one. Our execution, atmosphere and service are always top of mind.”