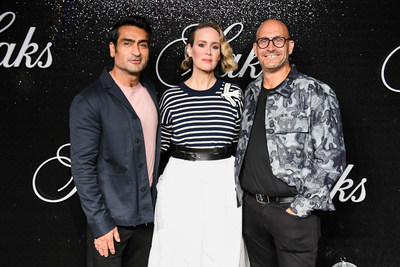 “We strive to create purposeful campaigns that combine the Saks fashion point of view with compelling perspectives on the latest in culture and entertainment,” said Emily Essner, Chief Marketing Officer, Saks. “With our fall campaign, we  hope to provide captivating content to inspire and engage with our customers this season.”

The women’s Fall 2021 Fashion Book includes the Saks It List, a forecast of the season’s must-have trends, such as blanket dressing, knitwear, sequins, vintage florals and boots. Similarly, the men’s Fall 2021 Style Book features Need/Now, with trends like comfort tailoring, bold colors and the statement jacket. The women’s and men’s Fall Books can be found in Saks Fifth Avenue stores now.

“As a fashion authority, Saks is committed to delivering the most distinctive and powerful luxury assortment each season,” noted Tracy Margolies, Chief Merchandising Officer, Saks. “As our customers prepare for fall, we look forward to inspiring them with the latest trends and best brands in fashion.”

Throughout the fall season, Saks will highlight the campaign across its print and digital channels, including shoppable editorial content featuring campaign stars Sarah Paulson and Kumail Nanjiani, email and homepage coverage and a social media campaign. Follow @Saks and @TheSaksMan on Instagram, and visit saks.com/womensedit and saks.com/mensedit for exclusive fall campaign content.

Sarah Paulson spoke with Saks about moving forward with a fresh perspective, her personal style and how she transforms into a character. Paulson plays civil servant Linda Tripp in Ryan Murphy’s Impeachment: American Crime Story, which premiered this week. Paulson, styled for the shoot by Karla Welch, stars on the cover of the Saks women’s Fall Book wearing a poncho from Gabriela Hearst’s debut collection for Chloé, and can also be seen wearing fashion from Alexander McQueen, Valentino and Michael Kors.

“I’ve been rewarded in my life for choosing things that frighten me,” Paulson tells Saks. “As a kid I was nervous and shy, but still dreamt about being an actress. I marvel that I’m now living my dream. I didn’t say ‘no’ even when I wanted to. Personally, I have my own work to do to feel comfortably powerful within myself and to look at things I’ve achieved as accomplishments—not happenstance.”

Kumail Nanjiani spoke to Saks about the past year, his fall style choices and his upcoming starring role alongside Salma Hayek and Angelina Jolie in the tentpole Marvel movie, Eternals. Nanjiani wears an Isaia look on the cover of the Saks men’s Fall Book, and can also be seen in menswear by Valentino, Fendi and Ermenegildo Zegna.

“What we’ve realized is the world is the world, we’re all connected, and what happens across the globe, happens to us,” Nanjiani tells Saks. When asked about Eternals, he commented: “It seems fitting that we have this global superhero movie coming. Hopefully, it leads to a less myopic vision of the world. It certainly has a very global view of humanity.”