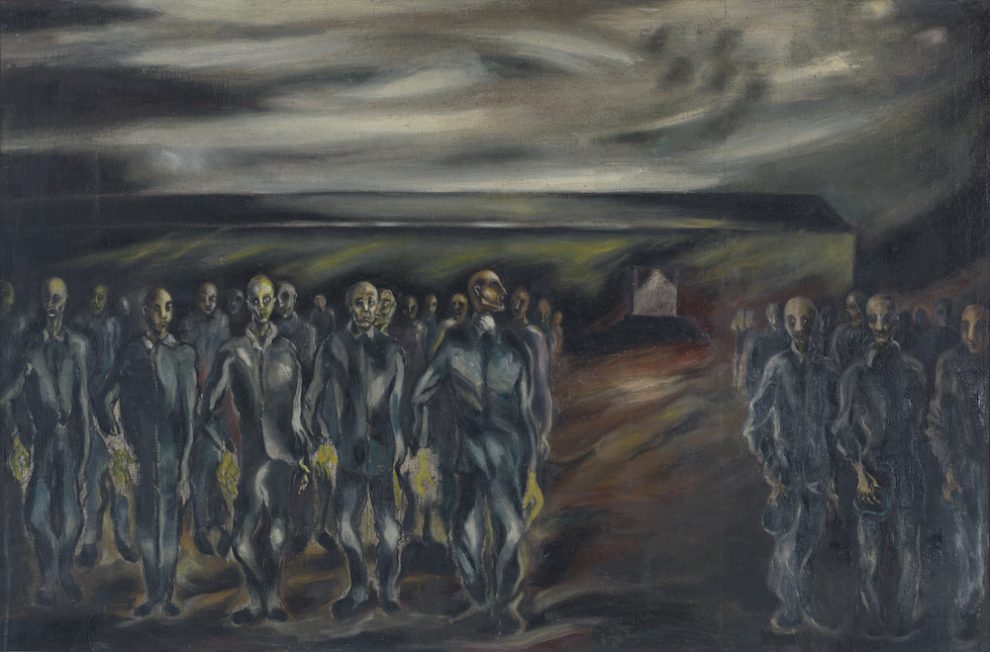 “Boris Lurie: Nothing To Do But To Try” is now open to the public at the Museum of Jewish Heritage – A Living Memorial to the Holocaust. This is a first-of-its-kind exhibition on the 20th century artist and Holocaust survivor and the museum’s first contemporary art show.

The exhibition is centered around Lurie’s earliest body of work (the paintings and drawings in his so-called “War Series”), as well as never-before-exhibited objects and ephemera from his personal archive, presenting a portrait of the artist reckoning with devastating trauma, haunting memories and an elusive, lifelong quest for freedom. In drawing together artistic practice and historical chronicle, “Boris Lurie: Nothing To Do But To Try” is fertile new territory for the Museum of Jewish Heritage, offering a survivor’s searing visual testimony within a significant art historical context.

The exhibition will run through April 29, 2022 at the museum, located in lower Manhattan’s Battery Park City.

Boris Lurie (1924–2008) grew up in cosmopolitan Riga, Latvia in the 1930s. He was just 16 years old when Latvia was occupied by the Nazis in 1941, and he and his family were forcibly evacuated to a ghetto. Later that year, his mother, grandmother, sister and girlfriend were murdered alongside approximately 25,000 other Jews in what would come to be known as the massacre at Rumbula. In the years that followed, Lurie and his father together survived several labor and concentration camps throughout Latvia, Poland and Germany, until liberation from Buchenwald-Magdeburg.

Lurie created his “War Series” in the immediate aftermath of the war, following his service with the United States Counter Intelligence Corps and subsequent immigration to New York.

In nearly 100 paintings and drawings made (with few exceptions) in 1946, the “War Series” ostensibly contains Lurie’s experiences of the war in a highly graphic, expressionist style: nightmarish camp scenes in riotous colors, laborers at work in striped uniforms, stark landscapes cut through with barbed wire, amorphous dream-like visions and searing portraits. As suggested by their somewhat unfi nished, chaotic style, as pages ripped from a notebook, Lurie considered these pictures a private catharsis, and never exhibited them in his lifetime.

Included in the exhibition is Lurie’s only known self-portrait as a young man, in which he appears disembodied with a plaintive expression. There is also the exhibition’s largest masterpiece — a ghostly concentration camp scene, 50 by 50 inches in scale, painted in 1971 after the original “War Series” was made.

“Nothing To Do But To Try” is the first Boris Lurie exhibition exclusively to consider the entire “War Series” alongside Lurie’s original family photographs, correspondence, diary entries and assorted ephemera, as an essential origin story for Lurie’s life and work.

“The basis of my art education I obtained in a camp like Buchenwald,” Lurie once wrote, alluding both to his lack of professional training and to how his traumatic experience became rich, if fraught, artistic terrain — his survival itself the ultimate creative act.

“As a person and as an artist, Boris was ingeniously creative, in the sense of both imaginative and productive. Foregrounding his life — his biography, belongings, voluminous writings, his surroundings, even his library — in concert with his early artwork reveals a more nuanced portrait of the artist than ever before,” explained Sara Softness, guest curator for the exhibit. “Beyond his immensely expressive artistic talent, the exhibition really considers his devastating emotional life and how he existed in the world — all inescapably informed by his trauma.”

“Our institution is committed to centering the Holocaust’s victims and survivors in our every act of remembrance and education,” said museum president and CEO Jack Kliger. “We are very honored to present this deeply moving exhibition and to have this opportunity to examine Holocaust history through the artistic brilliance of Mr. Lurie.”

The exhibition will be complemented by additional programs exploring Lurie’s life and legacy, including “Rumbula Remembered: 80 Years Since the Mass Executions” on December 7, 2021 and “Boris Lurie: Searching for Truth in Holocaust Images” on February 1, 2022. More detail on these events can be found on the Museum’s website, mjhnyc.org