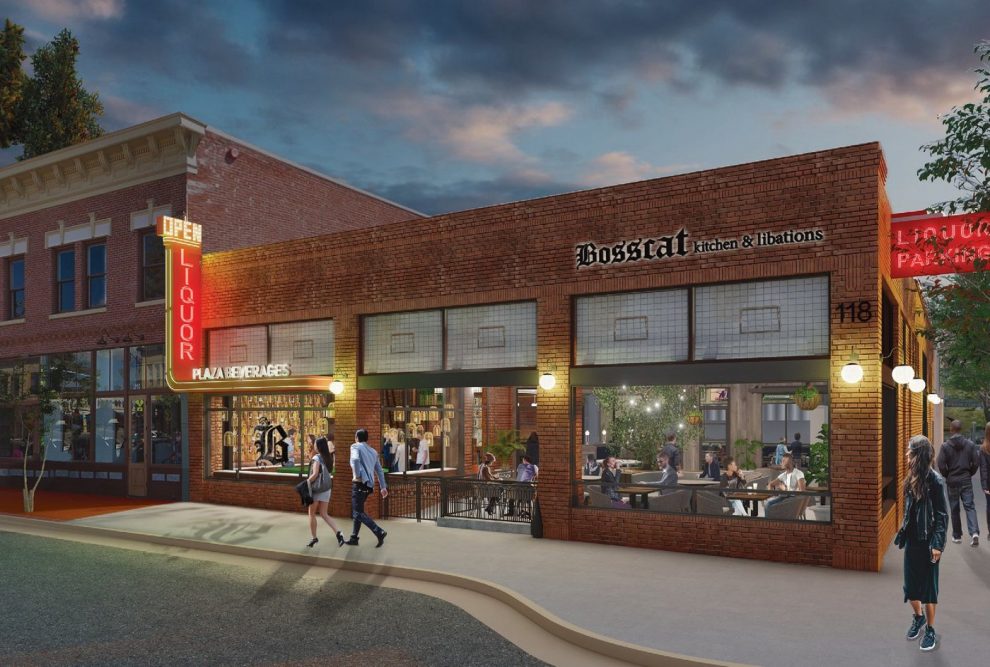 On the corner of Chapman Avenue and Olive Street in quaint Old Towne Orange, California, sits a single-story building with a rich history and exciting future ahead. The more than 100-year-old building is undergoing a renaissance, transforming from a beloved neighborhood liquor store into Bosscat Kitchen & Libations, a 5,000-square-foot, full-service restaurant with a menu featuring contemporary Southern comfort food and an expansive whiskey collection.

The design of the new Bosscat is firmly rooted in the history of the place. Working closely with the City of Orange, The Orange Community Historical Society, the building owners and restaurant tenant, AO Architects crafted a design that pays homage to the past while representing the bold future of Bosscat Kitchen. Design inspiration is drawn from the Prohibition-era building, blended with speakeasy culture and given a modern twist to create a space that is authentic to both Old Towne Orange and Bosscat Kitchen, whose nearby Newport Beach location has become a staple of the community.

Historic Inspiration
Constructed in 1915, the brick building at 118 West Chapman Avenue is best known as the home to Rod’s Liquor for the past 70 years. However, prior to the 1950s, the building served as an automotive garage, service station and tire store. Over the decades, the building façade was altered on several occasions as new businesses moved in. With the restaurant conversion ahead, new design decisions needed to be made that achieved the goals of the owner, tenant, city, historical society and stakeholders involved. When the team’s research into the building’s history uncovered photos of the structure in the early 1920s, all parties unanimously agreed that the next evolution of the building should turn the clock back almost 100 years to restore its original façade.

To emulate the design of the original building, AO’s approach addressed structural additions and renovation, restoration of historic components, utility upgrades and functionality for the future restaurant use. The existing liquor store façade features a single column and window bay preceded by a unique covered drive-through fronted by a row of awnings. Opening out to the pedestrian street on Chapman and Olive, the driveway is carved out of the building’s corner where cars previously pulled-up for oil changes and service. In the 1950s, the vehicle pass-through became an iconic drive-thru of sorts, where customers could conveniently park their cars inches away from the liquor store entrance. The new design converts this corner space into what seems to be its destined use — an inviting dining patio and welcoming restaurant storefront.

To restore the building façade and create a covered dining patio, a new structural column was added, along with two additional window bays, both of which were designed to match the existing antique materials. The original glazing and windows are undergoing restoration, and custom windows are being created to match the originals. The brick façade will undergo extensive cleaning and repair, and the new column and additions will feature matching brick to seamlessly blend the old with the new. The existing ’50s-era neon signage adds to the nostalgia of the building and will be restored to its former glory — the neon words still ringing true for Bosscat — “Liquor” in all caps and “Plaza Beverage.” During demolition of the interior space, workers uncovered various artifacts from the building’s former life, including antique bottles, tools and fixtures. The interior design was inspired by many of these uncovered objects, restoring and preserving them to use throughout the space.

The front entrance features a recessed doorway that opens to reveal a beautiful, spacious open truss volume and skylights, a dramatic feature that was previously hidden behind the simple convenient store interior façade. The restaurant features a private whiskey room, whiskey reserve, library and main bar, all accented by brass fixtures, brick, antique mirrors, dark wood and a splash of rich green for a pop of color. Fronting Chapman Avenue is a private whiskey room that features a single, large dining table and chandelier, surrounded by custom shelves and brass bird cages displaying the restaurant’s impressive whiskey collection. Flanking the whiskey room is the library, an intimate tasting space featuring floor-to-ceiling whiskey lockers and a dark wood library ladder for functionality and character. Bosscat Kitchen is currently under construction and scheduled for completion this summer.

A Truly Collaborative Process
The keys to the project’s success are collaboration, communication, creative problem-solving and strong project management. As is generally the case with historic renovations and adaptive reuse projects, the design team faced a wide range of development challenges that included building consensus amongst a variety of passionate stakeholders and navigating a complex process of approvals. This was successfully achieved by engaging the various stakeholders early on in the process and frequently, in an effort to better understand their individual desires and seek clarifications from the historical society with regards to what could and could not be done from a historic renovation perspective.

In this specific case, another special ingredient was added to the recipe: a shared love for Old Towne Orange, where AO Architects has been headquartered since 1974. All stakeholders walked in with a deep understanding of not just the historic importance, but also the potential to positively impact the community and extend the longevity of the structure for another century.

Jeff Rabbitt is a partner at AO Architects, an Orange County, California-based architectural services firm with 10 distinct design studios serving the entire commercial real estate spectrum. Rabbitt is head of the AO Restaurant design studio. He can be reached at 714-639-9860.

Ruba Younan is a principal at AO Architects and design director of AO Restaurant. She can be contacted at 714-639-9860.