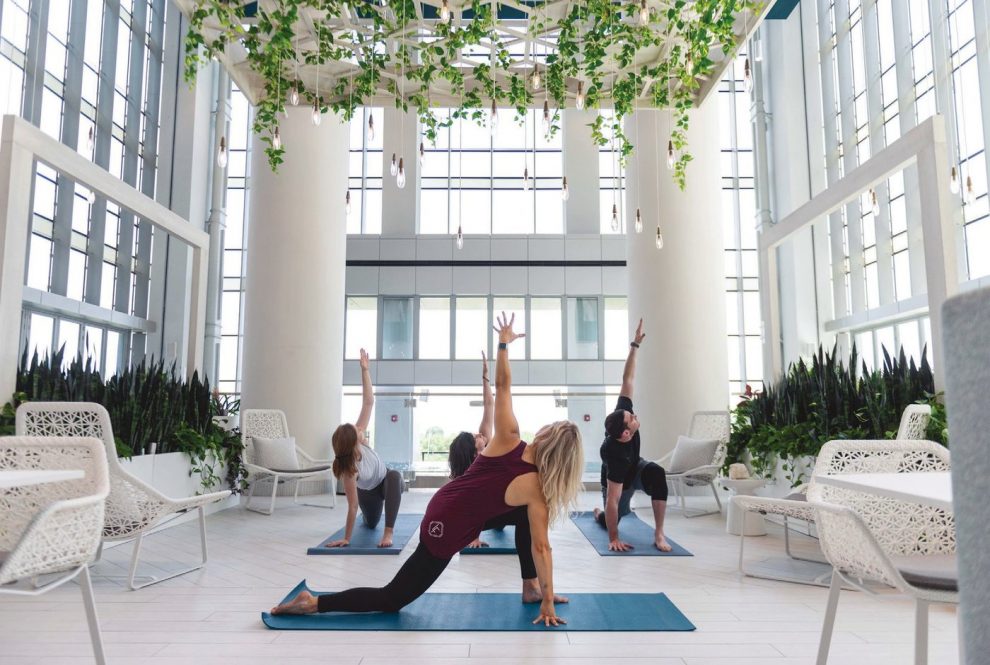 Today, Class A buildings need to offer more than fast elevators, high-speed internet and, perhaps, a cafeteria. A growing number of developers are encouraging overall wellness and turning to Colleen Werner’s amenities management company LulaFit to oversee an offering of fitness, nutrition and coaching to keep tenants health, happy and in their buildings.

“We’re living in the most sophisticated piece of technology we’re ever going to own,” said Werner, who founded LulaFit in 2014 after a career in movement. A professional ballet dancer for 10 years, Werner also attended the University of Michigan, majoring in dance and kinesiology (the science of movement) while on a break from dancing. “I got interested in educating people and teaching them,” she continued.

She moved to Chicago to perform, and soon began teaching wellness and movement, “mostly to pay my rent,” she recalled.

Eventually, she developed an elite clientele whom she’d visit in their luxury condo buildings and offices. A client eventually introduced Werner to the management of her building (then the most expensive in the city). The management promptly hired Werner to run their entire wellness program.

Werner began with one building in Chicago, at first offering private coaching and fitness. But it became clear that users wanted more — more classes, more advice, nutritionists and massage therapists, even social event organizers. What began as a fitness company evolved into a full-service amenities manager and a tech company to help control it all.

LulaFit’s hospitality-focused model aligns technology, programming and user experience to build cultures of wellness in these spaces — not just for tenants, but for employees as well. The goal: to enhance the wellness of everyone in the building. These include not just physical health but also mental and social health.

“This has been very exciting, as we can program for 100% of the building population and not just the 20% that go into the fitness center,” she said. “Years ago, we were doing a number of fitness classes in gyms, which was really pushing the envelope. Today, we offer full-service amenities. We offer all of the classes but also the amenities you’d find in an Equinox — the towels, the infused water, the massages.

“I was lucky enough to stumble into this industry in Chicago in 2015,” she observed. “We went through a multifamily boom at the time, and Chicago was a leader in offering amenities instead of offering a traditional concierge.”

It’s a national trend, as well. The Well Building Standard, which ranks buildings, interior spaces and communities that want to implement health features, was launched in October 2014. As the office market gained steam in 2017, these residents then wanted similar amenities in their workplaces.

“The influence came from that multifamily boom and forced the office industry to examine how they were looking at amenities,” Werner said. “They said, ‘We know we can no longer afford to just have a traditional concierge checking the box or a traditional manager for the fitness center. We have to blow this up and look at it differently.’ Luckily for LulaFit, we were the company that did that.”

For commercial office buildings, the company offers amenities such as fitness center design, development and management, and a web portal that integrates with the building’s existing technology. The staff has now expanded to include nutritionists, aestheticians, private chefs and other specialities. The company can also create community corporate wellness experiences and events with unique programming such as a trivia night, cooking events or healthy happy hour. A recent New York event had an aura reading, complete with fancy cocktails and socializing.

It all goes back to LulaFit’s roots and Werner’s goal of encouraging clients to engage in their communities.

These services can vary widely depending on the client. A tenant experience director could oversee various specialists, including someone running a building’s fitness center or another running a tenant lounge. Others deal with food and beverage. This allows LulaFit to capture unique planning in the market.

For the first four-plus year’s of LulaFit’s existence, it grew organically — a real challenge for a company that’s seen growth of 300% to 400% annually. Each of the employees has equity in the company.

“I empowered the people who work alongside me to think like an owner, act like an owner,” said Werner, who still owns a substantial majority of the business. “I truly believe that was one of the reasons we were so successful so early. Sweat equity goes a long way. ”

More recently, that early growth allowed LulaFit to attract venture capital funding in October to help the company expand geographically. LulaFit now services about 100 buildings, including some operated by CBRE, JLL, Related and Silverstein Properties. The company works in Chicago, Philadelphia, New York City and New Jersey, and is eyeing Washington, D.C. for its next market. The company’s clients have changed a bit in its short history. Two years ago, about 80% of its buildings were multifamily. Today, commercial comprises 60% of its business.

Being a woman in the industry has definitely not been an advantage, she said. Even more challenging in terms has been her background — just try walking into a major meeting as a 29-year-old, blond, former-ballerina.

“I could write a book with some of the stories and experiences I’ve faced in commercial real estate as a woman,” she said. “What has been more of a disadvantage is my age. It’s never been a deterrent for me. Looking back, I’m happy that was challenged first. I was able to establish my expertise right away. Once I had that trust personally, the company was hired right away.”

Now the challenge has evolved from trusting Werner personally to trusting LulaFit and its representatives as she has grown her staff to include marketing and financial experts.

“It was a huge disadvantage at first,” she said. “But now people appreciate that I’m different. Commercial real estate needs a bit of diversity.”

The ultimate goal, however, is a healthy client base.

“For me, it’s not about how big we can get, it’s about how big our impact can get,” she said. “I’m excited about the opportunity to be a part of the positive change in commercial real estate.”