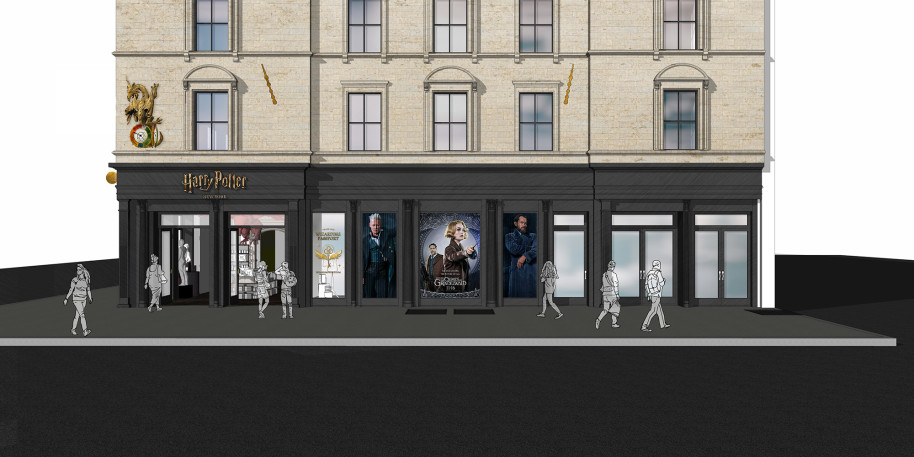 The newest major retail store announced for the city will bring a touch of magic to Manhattan. Warner Bros. has announced a flagship location for the Wizarding World of Harry Potter and Fantastic Beasts, to open this summer near the Flatiron building.

It’s a tremendous new opportunity for the city and could be a revival of entertainment-themed retail, a trend that rose and fell in the 1990s. The question is whether Harry Potter and friends can weave that kind of magic again in a very different retail environment.

To be located at 935 Broadway next to the Flatiron Building, the three-level, 20,000-square-foot flagship will house the largest collection of Harry Potter and Fantastic Beasts products in the world, ranging from robes to Bertie Bott’s Every Flavor Beans to wands (including a design exclusive to New York). Images released with the announcement show a café, possibly called The Hatch, featuring coffee, butterbeer and more.

“We are very excited to be opening in New York,” said Sarah Roots, senior vice president of Worldwide Tours and Retail for Warner Bros., in the press release. “It’s the ideal city in which to launch with so many dedicated Wizarding World fans, a cutting-edge retail environment and a community that embraces innovative experiences.”

This, of course, isn’t the first foray of Warner Bros. (the parent company of the Wizarding World) into retail. The company had a flagship store on Fifth Avenue and 57th Street for years, with a glass elevator that appeared to be pushed upward by Superman underneath. At its height in the 1990s, there were more than 100 Warner Bros. Studio Stores around the U.S. Arch-rival Disney opened its first themed store in 1987 and eventually had more than 700 stores around the world.

But the success of these types of stores is contingent on new merchandise from new content (films, plays, books), and if the movies aren’t successful, neither is the merchandise. As the new century dawned, sales had slowed considerably at both chains. Shortly after Time Warner merged with AOL, the company closed the Warner Bros. stores. Disney closed units and eventually sold its stores to Children’s Place, only to buy a number back when that retailer filed for bankruptcy. Today, there are about 300 Disney Store locations around the world.

So where does this leave the Wizarding World store? It’s important to note that it’s not just merchandise related to the Harry Potter saga, which was supposed to have concluded with the last book and films (though the “Cursed Child” play is a sequel). The “Fantastic Beasts” films provide new opportunities for fresh merchandise and experiences. Will it be enough? Time will tell.

The key may lie in real estate or, to be blunt, in avoiding the overexpansion that plagued the earlier Warner stores and even Disney. These experiences have to be special and likely will largely appeal to tourists. How often, really, will a New Yorker visit the shop unless another movie has come out? Note that other Harry Potter shops are located at Universal theme parks in Florida, California and Japan, the Warner Bros. Studio Tour London – The Making of Harry Potter, and the Platform 9¾ retail shop at Kings Cross station in London (for the uninitiated, where students board the train to take them to the Hogwarts school in Scotland), Heathrow and Gatwick airports.

New York’s Wizarding World flagship already is facing one challenge: the shop itself. Unlike other entertainment flagships, such as the current Disney store, the Wizarding World shop isn’t located in flashy Times Square. Instead, it’s in a historic district, in a landmarked 1862 Italianate building. As a result, the store reportedly won’t have everything depicted in early renderings. Plans for flagpoles extending from the exterior, the replacement of existing clocks on the building’s façade with ones topped by halo-lit dragons and the alteration of a window for food and beverage service have already been nixed by Community Board 5’s Landmarks Committee.

Because Harry Potter may have been able to defeat Voldemort, but there’s no way you can beat the community board.