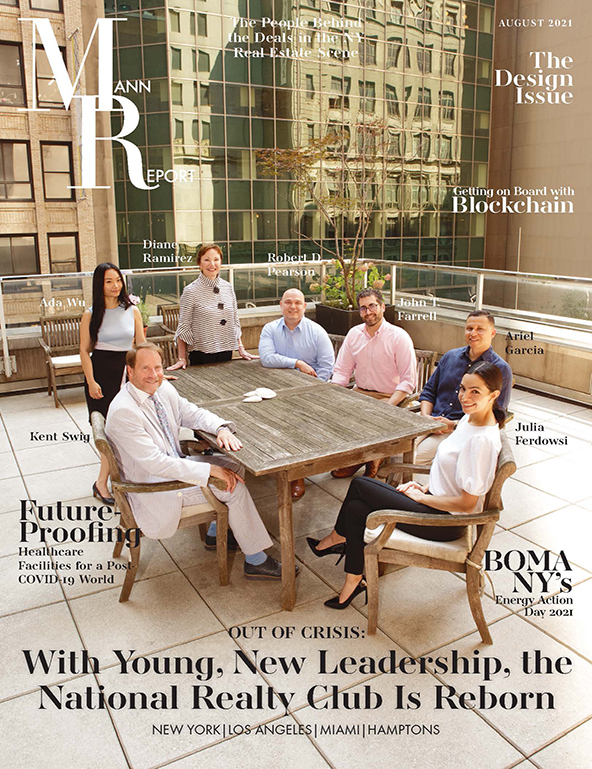 As the city emerges from COVID-19 and in-person events return, it’s time for the National Realty Club (NRC) to do what its leaders say it has done best for nearly 75 years: bring together the best of the best real estate professionals.

Founded in 1947 by Harry Helmsley and 15 of the leading real estate owners and professionals in New York, the NRC became the leading real estate club in the city, hailing members from all over the country a little more than a decade later. Today, it still adheres firmly to the standards established by its founders — the operation of a club based on the spirit of collegiality and cooperation.

Now, amid a crisis the likes of which the city had not seen since the Spanish Flu pandemic of 1918-1919, the NRC is being revitalized by a young, new breed of real estate professional that intends to lead and be a model of inclusivity for the New York City real estate community. As part of that reinvigoration effort, the club’s board of governors, who in the interest of continuity with the NRC’s illustrious history had previously made past president Robert (Rob) D. Pearson (an attorney, organizational development professional and real estate developer) chairman of the board, recently unanimously selected John T. Farrell, a commercial real estate appraiser, dispute analyst, expert witness, arbitrator and litigation support specialist from Cushman & Wakefield, as its new president.

A Storied History
The National Realty Club was born on December 23, 1947, when leading real estate owners, operators, builders and lawyers attended their first luncheon. The club had been organized to meet a great need: the establishment of private luncheon facilities in pleasant surroundings, for owners and professionals identified with all aspects of real estate and allied activities, a club where principals and brokers could meet daily and, along with the convenience of lunching together, transact business, negotiate deals and exchange ideas in real estate.

Originally operating out of the Roosevelt Hotel, the members moved to the Uptown Club (subsequently the 60 East Club), which was in what was then called the Lincoln Building (now One Grand Central Place).

If it seems like a lot has changed since the club’s early days, that’s because it has. Few can even remember when 42nd Street would have been considered “uptown,” but like the city that birthed it, the NRC is ever evolving. These days, NRC is based out of the Stanford White-designed Harmonie Club at 4 East 60th St., which sits atop an entrance to three subway lines, making it easy for members to attend NRC events.

Lest one think that the club is strictly business, it also boasts real estate luminaries such as Patrice Derrington, PhD of Columbia University and Sam Chandan, PhD of NYU Schack among its membership, giving it an intellectual heft not found in other real estate organizations. Its current governors include Kent Swig, president of Helmsley Spear LLC; Gregg Schenker, president of ABS Partners and Genghis Hadi, managing principal of Nahla Capital. Those governors have tasked Farrell, himself a longtime governor, to bring a new dynamism and passion for the future of New York real estate to a revitalized club.

Rebirth & Renewal
The board views Farrell’s mission as having four main prongs. First, he’s been charged with rebuilding the NRC’s ranks after the devastation of the pandemic year. Second, he is to restore an organization that is not only about doing deals, but also about giving back to the community. Third, he is to foster an environment based on diversity and inclusion to take the NRC into the 21st century and beyond. Fourth and perhaps most importantly, the NRC needs to continue to be fun.

To rebuild the NRC in the aftermath of the pandemic hinges on the club standing out from the pack. As most of the city’s real estate organizations — those that have survived, that is — come back to life, it is imperative that the NRC brings back the types of unique programming that will not only inform the membership and public, but also really stimulate them. To that end, several exciting events are planned for the fall, including a tech/blockchain panel led by member Ada Wu and Governor Ashkán Zandieh, an event featuring Derrington signing copies of her new book, “Built Up: An Historical Perspective on the Contemporary Principles and Practices of Real Estate Development,” and a NYC reopening event to be held at the TWA Hotel at JFK focusing on transportation, tourism, the hospitality sector and real estate infrastructure.

Part of this effort has involved reinstituting in-person social gatherings back in March, when the city was just starting to emerge from its pandemic-induced hibernation.

“As pioneers, we knew that we wanted to be first when it came to being safe but in-person, so we started by hosting bi-weekly happy hours,” Farrell said. “We made sure to have-top notch speakers so that we could educate as well as entertain our members and guests.”

Speakers included Tabitha Ponte of Ponte Health, who came up from Florida to pitch the members on an exciting new development, as well as Chandan, who gave his first post-pandemic, in-person economic outlook. For those who missed it, it was encouragingly optimistic.

For the second prong, the NRC is focusing on giving back. Part of this effort involves mentoring young professionals, who are the future of NYC real estate as well as the future of the NRC. In keeping with that vision, the NRC has restarted and reconfirmed its commitment to its Scholar Member program, which began in 2017.

By continuing and fortifying that program, the club is recommitting to the vision and reasserting the desire to have promising young real estate professionals actively participate in developing their leadership skills, having a voice in the dynamics and operations of the club and enjoying a place where they can be mentored by top-notch real estate professionals who have always wanted a way to thank the community for their success.

“What better way to do that than by mentoring the next generation of New York City’s real estate elite and making sure that they, too, have Harry Helmsley’s spirit of altruism toward the city and its institutions (the NRC hopefully included) that have been instrumental in their success?” Farrell remarked.

Scholar Member nominees are hand-picked from the best of the best at NYU Schack, Columbia’s MSRED program and other top real estate schools. Once accepted, Scholar Members pay only half dues while the other half is paid by an anonymous longtime legacy NRC member and prominent philanthropist. Through his generosity, the NRC is continuing to make a difference in the lives of young real estate professionals as well as guaranteeing the future of the club itself.

Further to this end, the NRC is exploring the creation of its own scholarship fund to facilitate the education of students in need studying at prestigious real estate programs.

“I was inspired by the Michael Farrell scholarship that was endowed at NYU Schack in my father’s memory,” Farrell added. “That scholarship has changed the lives of many young people. With its profile and scale, the NRC should be able to do even more.”

Jess Solley, a Michael Farrell Scholar in her own right who recently graduated with a Master’s degree in real estate from NYU Schack, has joined the NRC as a scholar member and as director of the Scholars Program. Her duty is to find and sift through the qualified candidates to become NRC Scholar Members. She will work closely with NRC corporate officer Yulia Arcuri, the former director of that program, a former scholar member and NYU Schack graduate.

The third prong of the revitalization strategy is to continue efforts begun pre-pandemic to build a far more diverse and inclusive real estate organization than any in the city.

Founded by some of the most successful real estate moguls in the country at the time in a 1947 smoke-filled dining room, there is no more storied history than that of the NRC. But the real estate industry in New York has evolved significantly and its governors believe that the organization should not only reflect that, but embrace and even lead it. Before the concept of diversity and inclusion became popular, the NRC was leading the way with systemic organizational change.

In 2015, NRC corporate officer Marissa Limsiaco worked to make the NRC more female-friendly and younger. A United States Military Academy graduate and veteran of the Iraq “surge campaign,” Limsiaco partnered with Pearson to bring visionary leadership and innovation to rebuild the NRC.

Limsiaco is a CRE technology entrepreneur who pioneered the industry’s first insurance product for lease security with her company Otso. Through her efforts, the NRC partnered with and attended the women’s Kayo Conference series, linked up with Michael Beckerman, CEO and founder of CRETech, to promote fresh, tech-focused activity and attended and connected other partnerships and events focusing on diversity.

Limsiaco, an Asian-American influencer in the LBGTQ community as well, set increasing inclusivity as a major goal from when she was a club leader. In full alignment with the goal to be more inclusive, in 2018 while he was then president, Chairman Pearson approached graduate students in the Eisenhower Leadership Development and the Social-Organizational Psychology programs at Columbia University to do a season-long research study on the NRC and its people, stakeholders and systemic processes.

One of the commission’s many recommendations was to create focused, pragmatic goals for increasing diversity and inclusion at the club. When it fulfills its promise, a more diverse NRC will make the club more innovative and adaptable to change and will allow the organization to be a model of how to do the same for its significant real estate member organizations, its leaders said.

To that end, new member Julia Ferdowsi of Man Global Private Markets was recently appointed director of diversity and inclusion; she and Pearson will implement the recommendations of the commissioned report to ensure that this change effort will remain an important part of NRC’s overall strategy and culture development.

Finally, if the NRC is to survive and thrive it needs to always be a fun place for its members, Farrell said. Having fun is good for business. It can lead to people becoming more open about ideas, leading to opportunities for innovation. As real estate organizations go, the NRC is small and exclusive. It’s always been the maverick of real estate groups and that’s not about to change.

“We don’t ever want to be one of those organizations that have senior executives and principals as members who just send their junior staff to our events because they don’t feel like going,” Farrell said. “We’re all extremely busy, so the content must be unique and compelling, and the events themselves must always be interesting and exciting such that the members want to come. That’s part of what sets us apart from all the other real estate groups in the city. You actually want to show up.”