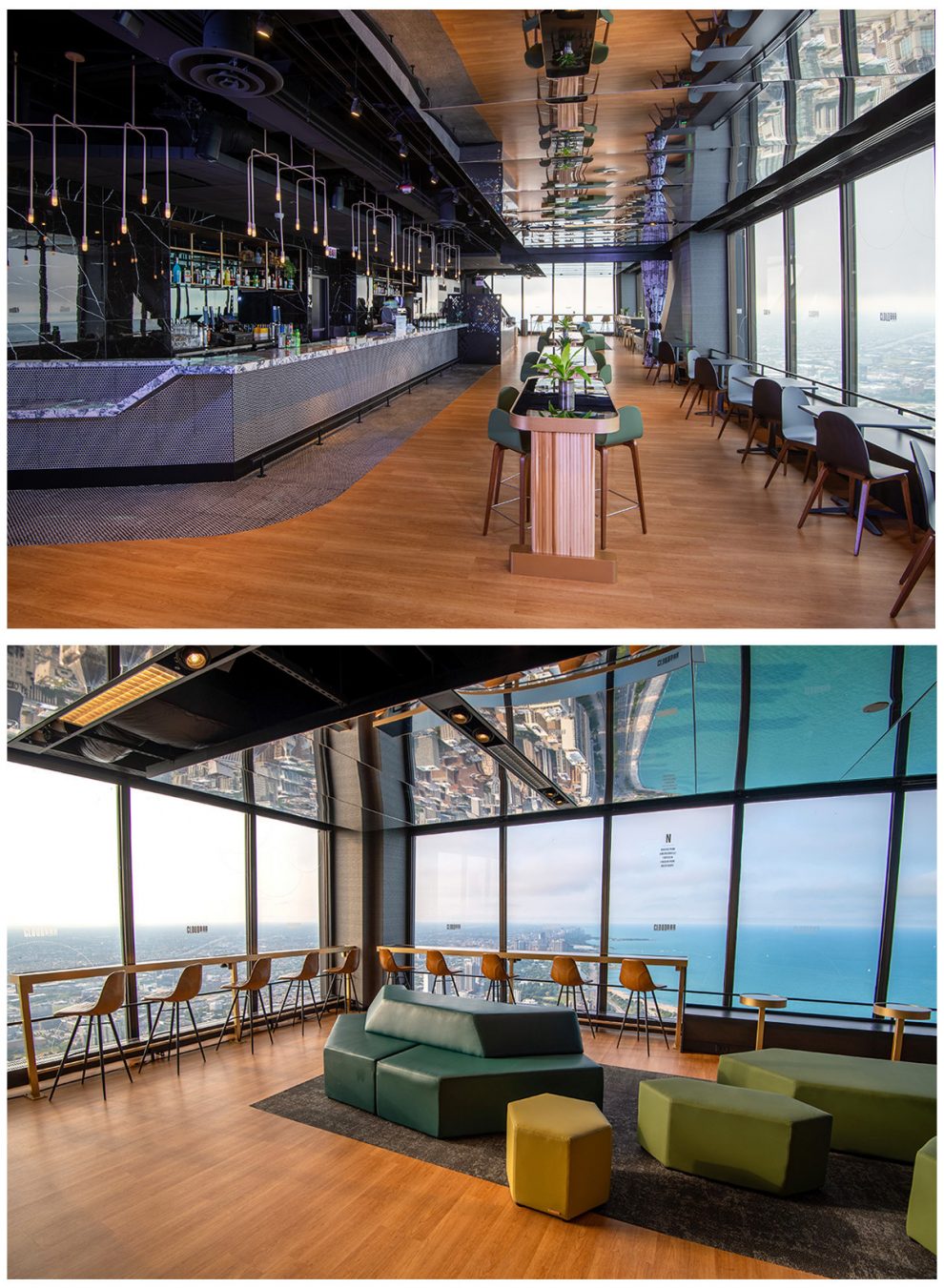 Magnicity, the global operator and creator of experiential attractions high above notable cities, celebrated the grand opening of Cloudbar on the 94th floor of the former John Hancock Center (875 N. Michigan Ave.) in Chicago. Situated over 1,000 feet above The Magnificent Mile at 360 Chicago Observation Deck, the new concept bar features hyper-local artisans and food and beverage partnerships.

“We want each Magnicity location to act as a true city ambassador for our guests – encouraging exploration of the vibrant neighborhoods within our cities and forging new adventures and experiences. We are thrilled to introduce our brand-new bar concept with CloudBar,” said Alexia Vettier, CEO of Magnicity, a Paris-based company that owns and operates 360 Chicago and other Magnicity experiences in landmark locations around the world.

The $2 million-plus renovation and opening of CloudBar represents the most recent element of a 10-year, $14 million investment strategy at 360 Chicago, all with a goal of centering authentic Chicago stories and experiences in every aspect of the guest journey, the company said.

A 42-second elevator ride whisks riders to the 94th floor observation deck where guests often look down on the clouds from floor to ceiling windows. The Gettys Group Chicago design team purposefully extended this experience by giving guests a feeling of floating in the air.

Local art brings an authentic Chicago street experience to the space, including that of Lauren Asta, a traveling muralist/artist based in Chicago. Specializing in freehand illustration, oddity art and street murals, she has created inspiring pieces in Chicago on over 40 walls such as gigantic murals in West Town, Pilsen and the West Loop.

On the food and beverage side, 360 Chicago has forged partnerships with a curated list of local makers. Moody Tongue, the world’s first two-Michelin star brewery, is introducing the Magnicity Pilsner, a brew created in partnership with 360 Chicago and solely available at CloudBar.

Other partners include Kit Kat Lounge & Supper Club, Vosges Chocolate, Garrett Popcorn, Carol’s Cookies and Kikwetu Coffee Company. By providing a unique platform for these local businesses, CloudBar seeks to introduce guests to these true Chicago brands and inspire a personal connection by sharing their products and stories.

In addition to featuring these dynamic partnerships, the menu at CloudBar is inspired by the culture and cocktails of many of Chicago’s neighborhoods. Guests will be able to both enjoy these true Chicago tastes while visiting 360 Chicago and also able to take home many of the city’s best with a wide selection of packaged items for purchase.

In addition to introducing CloudBar, 360 Chicago will also unveil the storytelling of local filmmaker Harvey Pullings II. Pulling’s most recent work is a documentary entitled “3 of 77: The Soul Of The Midwest,”  exclusively commissioned by 360 Chicago and hosted by Jahmal Cole, founder of My Block My Hood My City, a nonprofit that also contributed to content coordination.

“Both CloudBar and the exclusive documentary ‘3 of 77: The Soul Of The Midwest’ represent a continuation and expansion of our 10-year commitment to sharing the stories of the people, communities and artisans that define our neighborhoods and the city of Chicago,” said Nichole Benolken, managing director for 360 Chicago. “Our further investment will appeal not only to tourists but young professionals seeking a strong local experience, and at the same time it allows small businesses to gain exposure to the international guests we draw. It’s a win-win.”