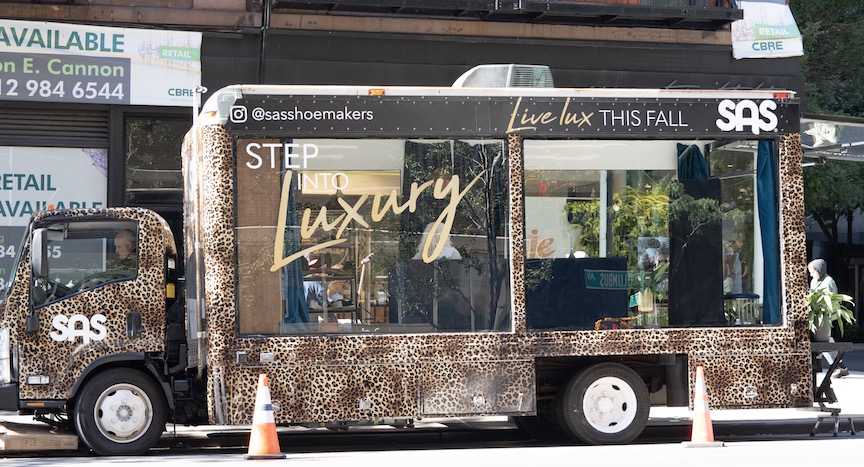 How a pop-up shop impacted a growing business

San Antonio Shoemakers (SAS) unveiled its latest collection of handcrafted footwear at a two-day mobile pop-up event in New York City. In what is becoming an industry standard, brands are finding new ways to showcase their latest merchandise to customers via pop-up stores and events. But unlike most that camp out at an available storefront, SAS utilized a leopard print-adorned glass truck.

Locals and tourists were welcomed into its specially designed interiors staged as an elegant shoe salon (with a plush couch and full-length mirror) where the SAS team conducted custom shoe fittings and even had a reflexologist offering foot massages. In addition, visitors were able to meet a couple of fashion influencers who’ve collaborated with the brand on promotional efforts via social media.

The two sites — one near Bryant Park in Midtown Manhattan, the other on the Upper West Side — were strategically chosen for the launch, as the most recent city foot traffic tracking on NYC open data shows that as many as 20,000 people pass through those areas in a single day. 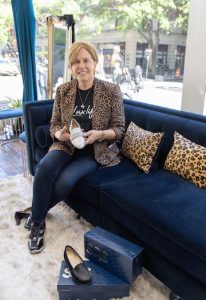 “The mobile pop-up was a resounding success that allowed us to directly engage many of the brand’s already loyal fans as well as the next generation of SAS customers,” said SAS CEO Nancy Richardson, who was present at the two-day event. “There’s really nothing like having that one-on-one time with them to understand what they need, what they’re looking for and how our shoes fit into their lives.”

With so many events taking place in the city every day, smarter brands are creating experiential set ups to attract even the most jaded New Yorkers — and attract them it did. SAS reported that it engaged thousands of customers and passersbys to the mobile pop-up shop. More importantly, Richardson said, the mobile pop-ups were meant to introduce new consumers to the brand and make it accessible to all customers with an omni-channel retail strategy: online, at brick-and-mortar stores and at independent multi-brand retailers.

“In just the last decade, the way people shop has changed so much, but the one thing that hasn’t changed is how important it is for customers see and feel our footwear in person,” said Richardson. “The proof of SAS is in the wearing, and the mobile pop up was a wonderful opportunity to hit the streets of a walking city like New York to demonstrate that.”

New Yorkers and tourists who got a preview of the collection tried on the new SAS pieces, including the Jade leather moccasin ankle booties and the Lara loafer in a variety of color options.

“We’ve always been known for quality and function of our footwear, but we were even more thrilled to introduce our latest collection because it really ups the fashion factor while staying true to our signature shapes and styles,” said Richardson.

These new styles have really extended the brand’s reach, as it has garnered momentum among younger social media influencers as well. The SAS collection retails from about $130 to $500 and offers a considerable range of footwear including lace-ups, sneakers, walking shoes, moccasins, boots, slip-ons, wedges, loafers, pumps, ballet flats and strappy sandals.

One interesting development during the pop-up was the countless number of men who had no qualms boarding the leopard print truck and who were especially receptive to the brand’s casual Camino sneaker. Visitors to the pop-up were treated to discounts for shopping on the SAS website and the chance to win in the SAS “Step into Luxury” giveaway of four pairs of shoes (considered a year’s supply, or one for each season).

Founded in 1976 by Terry Armstrong and Lew Hayden, SAS is among the few remaining American-made footwear brands. For over four decades, SAS has been handcrafting durable and comfortable men’s and women’s footwear in Texas with highly skilled (some up to third generation) shoemakers. The family-owned and operated company is currently in the hands of the Armstrong family under Richardson’s stewardship.

“We’re always exploring ways to make the kind of footwear that not only respects the legacy of SAS but looks ahead to the future,” Richardson said. “Not only are we committed to crafting them with care, but we have always looked at incorporating the latest technologies in making them superior in comfort and durability.”

Kontoor Brands Announces Departure of Juliana Chugg From Board of Directors