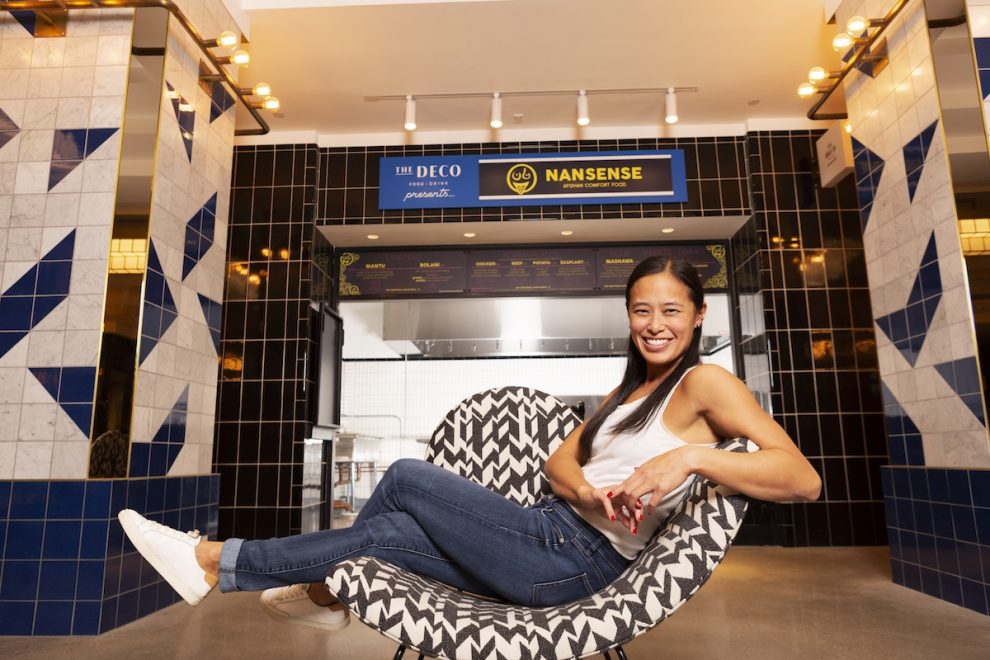 Nicknamed “Abattoir Row,” it was Manhattan’s slaughterhouse district in the 1850s, where cattle were delivered and destined for dinner tables. It doesn’t evoke a particularly pleasant (not to mention aromatic) scene. Ironically, it later became known as “the Tenderloin:” what was arguably the dirtiest, most depraved district in all of New York’s history.

“I think this neighborhood gets a bad rep,” Doris Huang said, referencing the several methadone clinics in the area, as well as the “zombie McDonald’s” on 34th Street and Eighth Avenue, known for drug deals and a deadly 2015 shooting. “There’s all that baggage that this neighborhood comes with, unfortunately.”

But Huang brightens. As the proud CEO, founder and owner of The Deco Food + Drink — a food hall, cocktail bar and event space at 231 West 39th Street — she’s not phased by the reputation the Garment District has gained and lost over the years. She sees it as an opportunity.

“I want [customers] to come in and be surprised. You walk in and be like, ‘Wait, where am I right now?’ But in a very positive way,” she explained. “Because if you walk into the Plaza Hotel, you expect something beautiful. If you walk in somewhere on 39th Street, you don’t necessarily expect it to look like this. I want that to be a moment of delight and, ‘Oh my gosh, how?’”

Not to disfavor 39th Street, of course. To recognize that this can exist in spite of its past. And now, it does.

TO NEW YORK, WITH LOVE
The Deco is Huang’s love letter to New York. Unintimidated by the male- dominated culinary landscape, her vision is to elevate the traditional food hall concept into an experience that tells the story of NYC’s history through food and design. But how does a Harvard undergrad with a Wharton MBA leave a senior position in global strategy at Godiva — with zero experience in hospitality and real estate management — write such a letter?

“All I knew was that it just felt like a need that nobody was meeting here,” she said. “Because I experienced the need, I know it’s real.”

As Godiva is located blocks away on 34th Street and Ninth Avenue, Huang frequently felt puzzled by the lack of quality food and beverage options in one of the city’s busiest work hubs.

“I think this is a food desert. I know that term is loaded and controversial, but in the sense that this is the geographic heart of NYC, yet starved for good options,” Huang said. “It’s crazy that New York is such a good food town, but in the neighborhood that’s in the center of everything, you don’t have access to any of that.”

She’s not wrong; over 500,000 travelers come and go through Penn Station daily, according to Amtrak’s Fiscal Year 2017 Fact Sheet. Not to the mention the 232,000 people who are shuffling in and out of Manhattan every day — including nearly 5% of the borough’s private-sector workforce — via New York City’s Port Authority Terminal Bus, reported City Journal. That said, a driving focus for The Deco was to represent NYC to those visitors.

“It was the whole ‘necessity is the mother of invention.’ As much as I don’t like to use trite phrases, it’s true in this case,” Huang said. “I saw this as a real opportunity, a service the neighborhood needs, and an opportunity in the Garment District. This neighborhood isn’t going to stay kind of forgotten and neglected for long. Ten years from now, this neighborhood is going to look very different. I’m confident of it.”

NOT YOUR TYPICAL FOOD HALL
“It was important to me to create a food hall that felt like more of hospitality experience,” Huang recalled saying to her architects when they first sat down to design the space. “What I felt was lacking in many food halls I visited was a sense of place,” she paused, “and personality,” as though each echoed the overplayed concrete floors, exposed ceilings, industrial steel beams aesthetic found in the majority of the halls she toured.

Perhaps the concentric structural integrity of the space or the massive bones and beams of the building naturally lent themselves to give way to an Art Deco design. Perhaps the “quintessential New York” design — reminiscent of old boys’ clubs and pointed noses — felt too anachronistic and heavy. Regardless, the point to paint The Deco as “not your average food hall” was through devilish details, like geometric symmetry and modern marble motifs and tambour paneling with brass trim on the backside of banquettes.

“The fact that we have a bar, and it’s the first thing you see when you walk in, was also a very deliberate design choice,” Huang said, again tying the decision and business model choice into one tangible result.

Thus, the ideal experience at The Deco: you walk by en route to work and pop in for a coffee. While waiting at a high-top table, you make a mental note of the Dole Whip soft-serve machine and come back later for a sweet lunchtime snack. And then again a few days later, but this time for the French rotisserie chicken. And then again that Tuesday with your coworkers, for the happy hour cocktails toting prohibition-era names and competitive price points. Suddenly it’s three months later, and the barista at one Mademoiselle by Maman station knows your coffee and croissant order.

“I think at a lot of food halls here, you start to see the same names crop up over and over again. Look, it’s part of the business model. It’s about fast-casual, which is on the rise with consumers. So I get that, but I didn’t want you to walk in here and see the same vendors that you see at every other food hall,” Huang said of her culinary curation. “By the same token, if you’re going to survive the Midtown lunch crush, you have to be a certain level of sort of experience and sophistication.”

CARBON COPY
“I will say that, right now, my mindset is not to do a carbon copy of this anywhere else,” Huang said. “Whether it’s in New York or other cities, there are some of my colleagues in the food hall world for whom that is their business model, and I respect that. But to me, this place is unique. We put a lot of thought into this address, this neighborhood, this particular set of vendors. It’s a very singular project in that sense. We didn’t create this project to be something that can be franchised out or replicated easily.”

It would almost be against Huang’s ethos and The Deco’s mission statement to copy the food hall and paste it anywhere else. The whole philosophy, Huang said, is that it isn’t meant to reiterate. The leg work — three years worth, mind you — is what makes The Deco stand out amongst the dozens of food halls in New York City.

“This model could still work somewhere else,” Huang said. “But from an aesthetic standpoint, a vendor curation standpoint, I would want to understand the local city before I did this again.”
Granted, if Huang were to do this again, she’s undoubtedly got an arsenal of lessons learned to guide her way.

“I just believe so deeply, and again it sounds trite, but I believe so deeply in this opportunity, this neighborhood and this need and this demand,” she said. “I could be wrong, 100%. I could’ve made the wrong bet about that, and sure, that’s possible. I don’t think I have any illusions about that being a certainty. It’s not a certainty by any means. But I believe in the opportunity.”