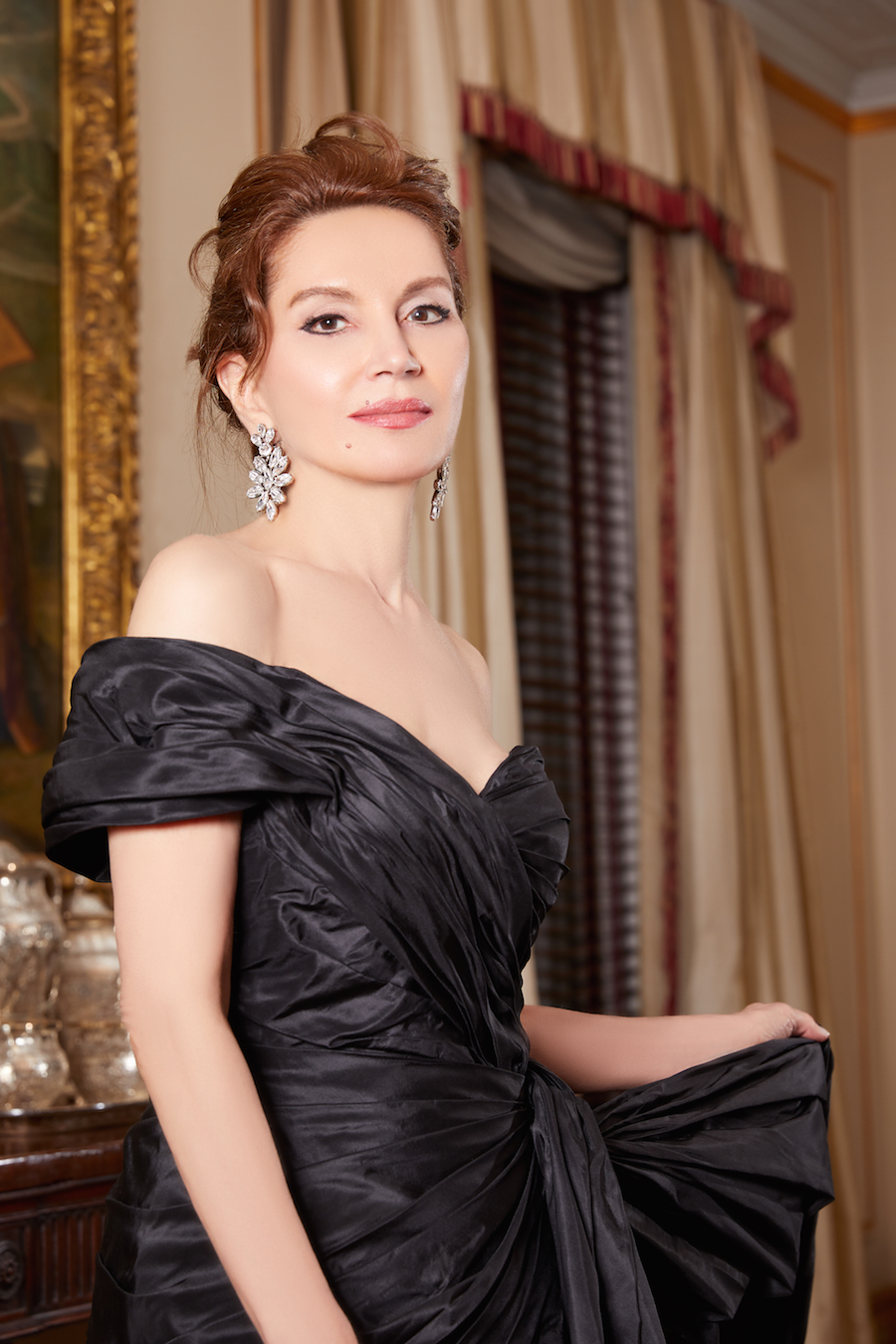 Philanthropist Jean Shafiroff is a fashionable figure, often photographed in eye catching ballgowns (her signature look) at the many benefits she attends on the New York and Hamptons social circuit. Her pictures often appear in Women’s Wear Daily (WWD), The New York Times and elsewhere. Shafiroff loves to have fun with couture, but she is a passionate and knowledgeable fashionista, having built a collection of more than 250 gowns over 30 years. These pieces are currently being professionally catalogued with an eye toward donating the whole to a museum in the future.

The Collection
Through her tireless work in philanthropy, Shafiroff has abundant opportunities to wear ballgowns; they comprise a major portion of her collection. She considers evening wear to be the pinnacle of a designer’s artistic expression.

“I think personally the ballgowns are the most exciting; they give a designer the most opportunity to show their creativity versus daytime clothing,” Shafiroff said. “My particular focus has been on gowns, straight and big ballgowns, by primarily American designers.”

Mainstays
Oscar de la Renta has long been one of Shafiroff’s favorite design houses; she estimates that she owns 40 to 50 pieces by de la Renta himself, some of which are one-of-a-kind or else limited edition.

“When I knew he was going to stop designing, I started buying more,” she said. She has stayed loyal to the brand, also acquiring dresses by de la Renta’s successor, Peter Copping, who took over the house in 2014. She also has many piecesbyLauraKimandFernando Garcia, the duo currently in charge of design at the label.

“I have many pieces designed by Carolina Herrera — I would say at least 30 or 40 from when she was designing, maybe more,” Shafiroff said. She has remained a fan of the label, continuing to buy even after Herrera turned over her company’s design duties to Wes Gordon in 2018.

Independent Designers & Classics
Shafiroff also loves discovering new talent and keeps her eye on smaller, more independent designers, trying to add new labels to her collection each year. She recently discovered Malan Breton and has about a dozen of his pieces. Couture pieces by Zac Posen, Zang Toi, B. Michael, Victor de Souza and Vicky Tiel form another part of her collection. Many of her garments are embroidered, and quite a few, such as the Zang Toi pieces, are hand-embroidered.

Also included are a good number of Chanel suits from the 1990s, as well as pieces by Bill Blass and Valentino and some rare, early Mary McFadden frocks.

Archivists from Vogue, FIT
A company called Clio Archivists is in the midst of cataloging Shafiroff’s collection. Each piece is stored in special paper designed for preservation and then hung inside dark bags; a few are laid flat. The archivists are Lilah Ramzi, a features editor at Vogue magazine, and Natalie Nudell, a fashion historian and instructor at the Fashion Institute of Technology (FIT). Shafiroff is not sure exactly how many pieces she owns or which are still in her possession — she used to donate her clothing to charity shops until she decided she wanted to keep them in a collection. Shafiroff hopes to show it in a museum exhibition one day and to donate it later on. She is also thinking of doing a book of her gowns.

Mixing Fashion & Philanthropy
“For me, fashion and philanthropy really go hand in hand,” Shafiroff said, who has appeared on best- dressed lists alongside Meghan Markle and Anna Wintour, according to her public relations firm. For years, she has served on the board of the Couture Council of the Museum at FIT, a nonprofit arm of the fashion school, and has co-chaired its annual luncheon honoring industry greats like Christian Louboutin and Narciso Rodriguez.

“Having that involvement has truly broadened my interest my interest in fashion,” she continued.

In addition to the Couture Council, her philanthropic work focuses primarily on healthcare, women’s rights, the rights of underserved populations and animal welfare.

The charity galas are also part of her work. Shafiroff holds an MBA from Columbia University, sits on the boards of eight charitable organizations, chairs at least that number of benefits each year and hosts large fundraising parties at her home. But to Shafiroff, fashion is more than just wearing designer clothing; it’s a passion. Some pieces she buys only to add to her collection, but the majority she enjoys wearing. She puts considerable thought into each look, depending upon the theme of an event, the décor and the type of crowd that will be there.

“When I chair a gala, I am an ambassador for that event,” Shafiroff said. As co-chair of the Viennese Opera Ball in February, she wore two different dresses; one, from de la Renta, included red and white (the colors of the Austrian flag) and a floral motif.

“It reminded me of what maybe someone might wear in the Austrian countryside because of its pattern,” she said. For the latter part of the evening, she paired a deep red gown by Wes Gordon for Carolina Herrera with white leather opera- length gloves for a royal feel. She wanted to “[show] two sides of what I remember of Austria: beautiful countryside and the Alps and the formal, elegant Viennese Opera,” she said.

Some of Shafiroff’s gowns may be over-the-top, but as a collector of fashion, she believes nothing is too extravagant.

“If it displays the work of a designer, it’s great,” she said.

Some have a whimsical element, like the “candy cane” dress created by Victor de Souza for the New York Botanical Garden’s Winter Wonderland event in December 2019. In a shiny material of red and white stripes with green and red embroidery, it evokes Christmas spirit.

“No question: the dress looks like a candy cane,” Shafiroff said. “I really can’t see wearing this dress anywhere but to a pre-holiday party.”

While she enjoys a bit of playfulness in her style and isn’t afraid to stand out in a crowd, Shafiroff observes dress codes, whether explicit or tacit, and dresses appropriately for any occasion. When she was to meet Prince Harry in London to support Walking with the Wounded, his charity for U.K. military veterans, she learned that protocol dictated that her arms and knees be covered. She had just purchased a fuchsia Oscar de la Renta dress with black beading and bell sleeves that covered her elbows.

Last year, Shafiroff was invited to Rome by a charity group, where she had a private audience with Pope Francis. She did some research and found that it was proper to wear a black dress and a mantilla to meet the Pontiff.

“I wanted to dress appropriately. It’s really out of respect,” she explained. She bought a black dress from Carolina Herrera that covered her knees and had a special sleeve. She had the mantilla made by Suzanne Couture Millinery, the renowned Upper East Side hat maker. “I bought the dress a day or two before I left, and they had it ready the day of, and the same with the mantilla. It was just beautiful.”

Shafiroff never borrows clothing from designers; she purchases because she believes that collecting fashion supports the designers and shows respect for the work. Plus, then she can add it to her collection.

“I think it’s very important in order for the industry to continue to flourish and to employ the millions of people that it does,” she said.

And she derives immense pleasure from wearing these creations.

“When I have a beautiful gown on, it’s like I’m wearing art,” she said. “I’m displaying the art of a great designer.”