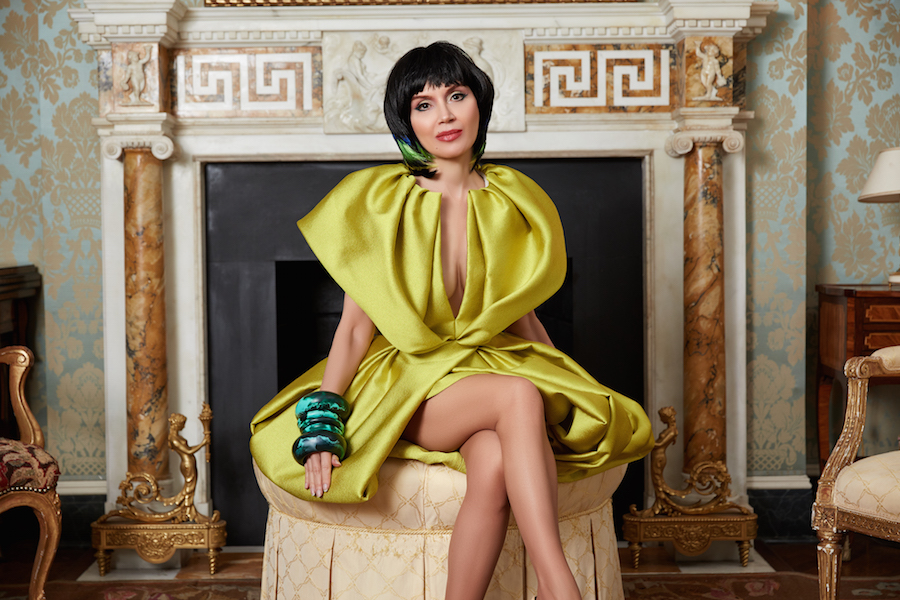 From fashion and philanthropy to media mogul: style icon and philanthropist Jean Shafiroff has switched gears during the pandemic. A longtime leader in the philanthropic social scene in New York and the Hamptons, Shafiroff has taken on a new role as producer and host of a dynamic television show highlighting the work of actors, artists, heads of charities and even a U.S. presidential candidate.

The show, “Successful Philanthropy,” shares its title with Shafiroff’s 2016 book. It airs six times each week on LTV in East Hampton (Channel 20) and in New York City on Fridays on Manhattan Neighborhood Network (MNN) TV, Spectrum channels 34 and 1995, Verizon/FiOS 33 and RCN channel 82, with additional markets to come in 2021. It is also available on Shafiroff’s YouTube channel. Her dream is to make it national.

“Right now, we all need to be lifted up,” she said. “Life as we knew it will come back, but most of us have been seriously challenged. I’ve always loved the idea of hosting a TV show, and when the pandemic hit, the timing especially seemed right for a program about philanthropy. The people I meet and the work they do is fascinating. My show is designed to motivate others — and also to create a little buzz and news!”

Inspired by TV personality Kelly Ripa, Shafiroff strives to bring a wide variety of intriguing personalities to viewers, reflecting her interest in people and their stories and her love of helping others.

Many CEOs of local, national and international charities have been guests. Dan Gasby, widower of beloved restaurateur B. Smith, stirred up a flurry of press attention when he revealed on the show that he had broken off his relationship with ex-girlfriend Alex Lerner.

“The television series is giving me a new platform,” said Shafiroff. “But it also gives those I invite an entirely new platform that maybe they don’t have.”

Prior to hosting the show, Shafiroff appeared often as a guest on TV programs around the country, talking about philanthropy, her book and how people can get involved. At the start of the pandemic, she made numerous on-air appearances to advocate on behalf of food pantries, racial justice and animal welfare on national networks including NBC, CBS, FOX, ABC and WGN in Chicago, as well as NY1 in New York.

Shafiroff and her husband Martin collect art. Known for her sense of style and often appearing on best-dressed lists, Shafiroff has built a serious collection of ballgowns, her signature look. She loves to have fun with couture, and she is passionate and knowledgeable about fashion. She has amassed a museum-worthy collection of more than 250 gowns over the years by designers such as Oscar de la Renta, Carolina Herrera, Mary McFadden, Victor de Souza, Zang Toi, B Michael, Zac Posen and Malan Breton. She considers evening wear to be the pinnacle of a designer’s artistic expression.

“I think ballgowns are the most exciting; they give a designer the most opportunity to show their creativity versus daytime clothing,” said Shafiroff.

With the expectation of donating them to a museum in the future, these pieces are professionally catalogued by Clio Archivists, a company founded by Lilah Ramzi, a features editor at Vogue magazine, and Natalie Nudell, a fashion historian and instructor at the Fashion Institute of Technology (FIT).

While New York Fashion Week was mainly virtual this season, in September 2020, Shafiroff was guest of honor and emcee for Times Square Fashion Week, where models showed looks from seven designers and Manhattan Borough President Gale Brewer spoke to a crowd of fewer than 50.

Television is not the only platform that Shafiroff has embraced to bring attention to the philanthropic causes that she champions. She also writes for various publications and serves on the boards of many charitable organizations, including the New York City Mission Society, the French Heritage Society, the Couture Council of the Museum at FIT, the Southampton Hospital Association, the Honorary Board of the Southampton Animal Shelter Foundation and Global Strays, an animal welfare nonprofit founded by her daughter.

Though she is Catholic, she served as a trustee for the Jewish Board for 28 years and is now one of its few honorary trustees. She earned an MBA from Columbia University and is a past board member of the New York Women’s Foundation and remains very active in the organization.

Social media is another way that Shafiroff communicates, promoting not only charities but sending positive messages, trying to lift the spirits of her more than 700,000 Instagram followers and encouraging safety during the pandemic.

“I love doing the TV show, but of course I continue with my philanthropic work,” Shafiroff said. Her activities now include plenty of Zoom meetings and chairing several virtual fundraisers.

“It’s different. Almost all fundraising galas are now virtual. We continue to raise money, it’s just in a whole new way,” she added.

She has also refocused many of her donations to the COVID-19 relief funds of several charities in light of the critical needs stemming from the pandemic, including hunger and animal welfare.

Shafiroff was recently appointed National Spokesperson and the Ambassador for American Humane’s Feed the Hungry COVID-19 program, which gives grants earmarked for food to animal shelters nationwide. The program is designed to feed one million hungry animals in shelters across the U.S.

The global health crisis has only deepened Shafiroff’s commitment to philanthropy.

“We must work hard to help one another. Looking forward, I am optimistic. Even though life has changed dramatically, I am grateful to be able to continue to work toward building a more equitable world.”