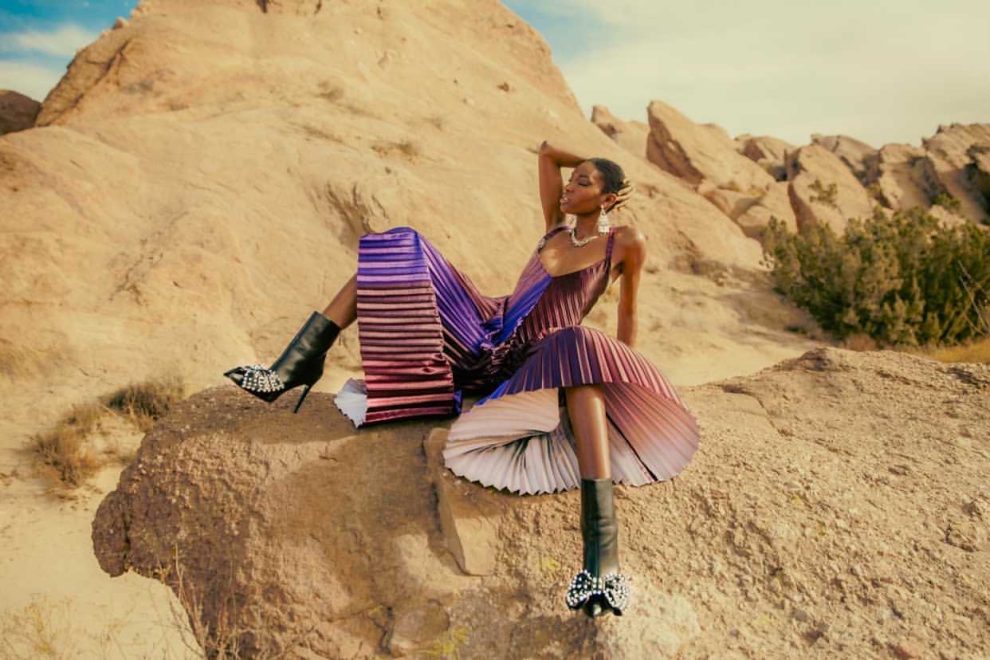 You’ve probably seen Kahindo in a store (back when we could go to those) or on Rent the Runway (where we’re all shopping now). You might even recognize designer Kahindo Mateene from her time on “Project Runway.” But if you only know her for her stand-out prints and distinctive textiles, you haven’t met her yet.

“My primary focus is on the human factor,” Mateene said. “A lot of times, when people speak about sustainability, they do focus on the environment — which, obviously, is the No. 1 thing — but people forget human rights and how garment workers are being treated.”

Mateene, now the founder and chief creative director of eponymous brand Kahindo, studied international business as an undergraduate at Blackburn College in Illinois, and she’s since seen the problems posed by an industry obsessed with fast fashion. With her supply chain rooted in several African countries, her manufacturing set in China and her clientele in the U.S., Mateene has made herself familiar with every phase of the process — and the people who participate.

“Throughout the whole apparel industry, garment workers are just never treated right — they work in really dire conditions — and then, when you come and talk about garment workers in Africa, it’s a whole other challenge of not really even having jobs,” Mateene said.

According to a report by the New York University Stern Center for Business and Human Rights, Ethiopian garment workers are the lowest paid in the world. On average, workers earn $26 per month, even though brands like H&M, Calvin Klein and Tommy Hilfiger have factories there. In contrast, the minimum wage for a garment worker in Bangladesh amounts to about $126 a month, according to The Guardian. And the existing pressures have only worsened with the onset of the pandemic.

Still, Mateene recognizes how essential it is to tackle a problem that many other brands deem too difficult to address.

“This was extremely important to me because, you know, I was lucky enough — my father was a diplomat, and he really instilled that a good education is important,” she explained. “He basically supported all of my educational choices, but a lot of women in Africa, in Congo, don’t have those same choices. So I’ve always wanted to give that but in a very tangible way.”

Mateene was born in Uganda to Congolese parents, and she’s as well-traveled as she is fashionable. Growing up, she bopped around to Ethiopia, Niger and Nigeria, celebrated Christmases in her hometown of Goma in the Democratic Republic of the Congo and moved to the U.S. when she was 17 to attend college. So much activity at a young age was what first tuned her eye for design.

“I went to the same school from like elementary up to secondary school, and — interesting — I went to an all-girls boarding school, and we wore a uniform,” she said. “And like, subconsciously, I always wanted to be more creative because I had to wear the uniform for like 10 years of my life.”

Although fashion as a career choice didn’t enter her mind until much later, Mateene’s experiences as a girl exposed her to the possibilities inherent in design and dress.

“My interest in fashion grew because I was constantly surrounded by it,” she explained. “Congolese culture is very in fashion — we’re known for our music and our fashion. It’s very bold and in-your-face.”

Mateene’s mother, she said, was a “fashionista in her own right.” She was able to make clothes her own, and she encouraged Mateene’s interest in sewing.

“A tradition that we had, especially our family, every time we would go back home, we would go to the market, pick up different fabrics and prints, and then go to the local tailor. They would take our measurements and we would get an outfit made for Christmas,” Mateene said. “[My mother] had a Singer sewing machine, so she would make us some clothes. Spiegel catalogs would get sent to our house, so we would pick things in the Spiegel catalogs and she would make them for us.”

Inspired by her family traditions, Mateene attended the Illinois Institute of Art in Chicago to study fashion design and launched her own brand in 2009. Then, “Project Runway” happened.

“It was a crazy, intense experience,” she said, noting that it took three rounds of applying before she was selected for the hit Bravo show.

“I went into it, honestly, a little naive, thinking it was all about talent. But, obviously, first things first: it’s all about TV ratings,” Mateene said. She was eliminated early in Season 12, one of the seasons most notorious for on-screen drama.

“I hadn’t had the opportunity to really tell my story on the show… I quickly learned that I don’t like being in front of the camera,” she said with a laugh.

Mateene admitted that she used to think about her time on “Project Runway” with some exasperation, but it ultimately taught her two important things: first, it was time for her to move to New York City. Second: it was time to take on what really mattered.

“That was one of the reasons for the rebranding — really focusing on ethical fashion, on sustainable fashion,” Mateene said. “And then I also started designing my own prints as well, because I wanted it to really come from a unique point of view.”

The rebirth of Kahindo in 2017 has proven to be a force in the design world.

“I love textiles and textures, so more and more I source interesting textiles. For example, for my Spring 2021 collection, I sourced beautiful jacquard from my fabric supplier that’s based in Dubai,” Mateene said. “But I do like either collaborating with African artists to create new prints — custom, original prints — or working with refugee artists in Kenya to hand-dye prints.”

“The mission of my brand is really to create sustainable jobs,” she said. “ [I] Work with female artisans in Africa in order to have a social impact, empowering women, closing the gender gap and paying fair living wages.”

The success of that mission is primarily measured anecdotally since the Kahindo team is small, but Mateene tracks things like the number of days it takes to make a particular sample, ultimately calculating a timeline of employment.

“Having a job — a paying job that pays a good wage, which is extremely important — can really help women and communities come out of poverty,” she said.

As for the fear that her story got lost when it hit prime time, Mateene has decided it’s better to embrace the platform in whatever way she can to further her mission.

“I’m so proud of my African heritage and upbringing,” she said, “ And I want to tell positive, authentic stories about Africa through my brand.”