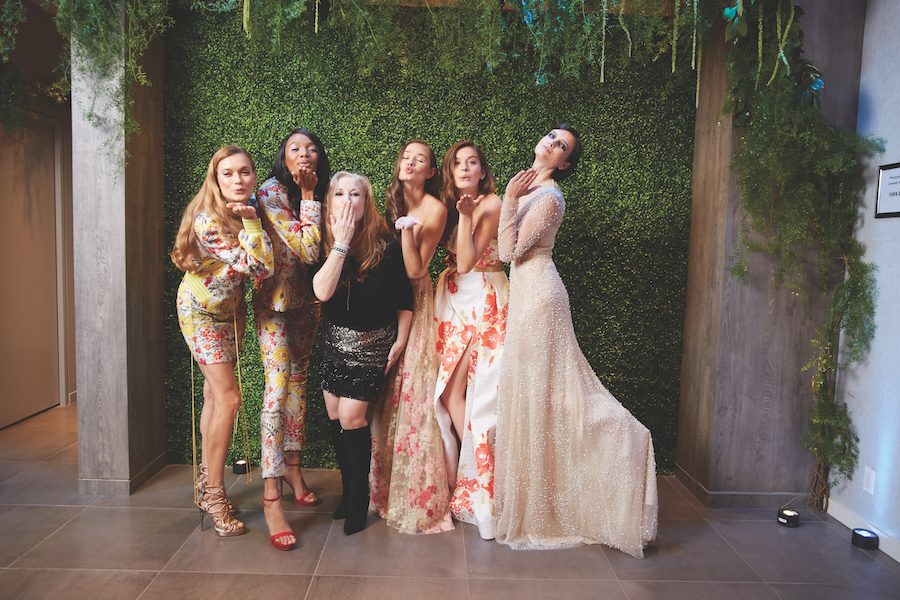 The world of couture is a rarefied one in normal circumstances — not too many women are in need of evening gowns for, say, opening night at the Metropolitan Opera or the season finale of “The Bachelorette” — but when the entire planet shuts down because of a pandemic, that already light demand shrinks to a trickle. What’s a couturier to do when her clients can’t get dressed up because they have nowhere to go? If you’re Randi Rahm, you pivot.

This past spring, when it became clear that the most exotic destination in anyone’s future was the post office, she channeled her energy into a new line of casual pieces she calls At-Leisure.

“I couldn’t stand everybody wearing their pajamas or sweats in Zoom meetings or out walking around,” Rahm said. “Fashion starts from the inside. If you put something on and you feel good, you have a great day. But if you don’t feel good in what you’re wearing, you’re not having the best day. It’s just human nature.”

While some observers and headlines celebrated the emergence of the sweatsuit as the new uniform, Rahm kept her clients outfitted in elevated basics, like soft pink hoodies with pearl-ended drawstrings and silk pants with details of gold rings.

“It caught on very nicely,” she said, adding that she hopes the line’s moderate price points will attract customers who have been fans of the brand and now can afford their own Randi Rahm. “My At-Leisure pieces are one step above the mass athleisure out there for people to feel good and look good at the same time.”

While the couture element of her business might be less front-and-center at the moment, Rahm has no plans to give up on the sort of craftmanship that inspired her interest in fashion from the beginning. Rahm grew up watching her “very glamorous” grandmother get dressed for all occasions in custom couture.

“It was the real deal,” she recalled. “It was something that I was exposed to as a little girl, not even realizing that it had the influence it had for me later on.”

Her grandmother often wore designer fashions, inspiring the couture that Rahm creates today. One outfit still stands out in her mind.

“I remember her getting off the plane, head-to-toe Dior, wearing a baby blue capelet that was trimmed in baby blue fox with a coordinating dress, finished off with a matching fox hat and suede, baby blue high heels and bag — and, of course, a very large diamond brooch as a closure. She was gorgeous!”

Trained as a classical pianist and conductor, Rahm’s first foray into the business was fate; she made a quilt for her son that attracted the attention of a boutique owner, who then contracted her to make some for the store. From there she started making dresses for little girls, teaching herself how to sew using two loaner machines from the boutique.

“As fast as I could make them, that’s as fast as they sold them,” she said.

When The New York Times ran an article that called Rahm “the awkward-age couturier,” mothers started writing to say they wouldn’t mind having some of her designs in their own sizes. So, she expanded to women’s clothing.

Rahm estimates that the company as it exists today started in 1999, but she’s now been making clothes for over 40 years — enough time to have witnessed the rise and fall of trends, designers, houses and entire systems of marketing and selling fashion. Much has been made of the effect COVID-19 will have on the future of fashion shows and brick-and-mortar retail, but Rahm claimed she saw the writing on the wall long before the pandemic hit.

“Those days are over,” she said, referring to the endless cycle of collections that has driven many a marquee designer to financial burnout. “I did show in stores for a short period of time. I found I couldn’t be a part of that kind of situation. I got lost in the shuffle, and financially, it could have destroyed me completely. You can’t survive that way being an artist.”

Rahm’s commitment to art above commerce even extends to the word she uses to describe her clothes — she prefers the term “evolution” to collection, because it reflects the way a person might build on or expand her look over time.

“We don’t stand still,” she explained. “The authenticity of who we are should stay with us. We lose a lot of that in the fashion industry because it became fast fashion — very fast and very trendy. Good fashion is keeping your own look and being able to incorporate the trends that are around you.”

If you’ve ever seen a Randi Rahm dress, then you know that “fast” is not a word one could use to describe it; her most elaborate pieces can take up to 800 hours of work to create. That’s because of beading and embroidery, of course, but also because Rahm believes in never sacrificing comfort over fit. That’s one reason her dresses have been so popular with the women of “The Bachelorette,” the ABC reality show she’s worked with for over a decade.

“I’m a woman, and I know how things should feel,” Rahm said. “Most of my dresses, even the one-of-a-kinds that look like they’d be extremely heavy, are comfortable. I think about the science of it, how it feels on and if it’s going to be comfortable after you wear it for hours.

And in the world of “The Bachelorette,” which can film until the wee hours of the morning, you definitely want your 30-pound beaded stunner — see Rachel Lindsay’s 2017 finale dress — to be comfortable.

The Bachelorettes have been known to talk among themselves about loving her work. In addition to Lindsay, several of them, including Ashley Hebert and Tayshia Adams, have chosen Rahm’s gowns for their respective season finales, wherein the Bachelorette gets engaged.

Though you might think this is all the work of stylist Cary Fetman, who starts with thousands of garments for each season before culling them down to a more manageable selection, the Bachelorette does ultimately get to choose the pieces that make her look and feel best.

That ineffable “something” has also kept her work popular with celebrities, who’ve worn her clothes everywhere from the Country Music Awards (Carrie Underwood, Miranda Lambert) and the Tonys (Chita Rivera) to Michelle Obama’s 50th birthday party (Beyoncé). The lavishly embroidered suit and full-length cape she designed for Billy Porter’s 2019 Golden Globes appearance is a particular favorite, and this year, the look is headed to London’s Victoria and Albert Museum for an exhibit called “Masculinities.”

“It’s how I see him and his personality — his vivaciousness, and his ability to rock whatever he’s wearing,” Rahm said of the look, which took more than six months to finish. “He feels fashion so much — he exudes fashion. It was a way of showing the fluidity of who he is, because the cape gave him that drama. That suit became a masterpiece of fashion.”

It all comes back to Rahm’s central philosophy of design: if you’re unhappy in it, it’s worthless.

“You could be wearing a million-dollar dress, but if you don’t feel good in it, what’s the point?” she asked. “Most of the time, when you look at these couture shows, people go, ‘Oh my god, it’s fabulous, but who’s ever going to wear it?’ I would love somebody to give me millions of dollars to make an unwearable fashion show of beautiful pieces that these gorgeous nymphets that walk down the runway wear. One percent of 1% of the world [looks] like that. I’ve always bucked up against that as unfair to women, because few people really look like that. We’re all trying to look like what the fashion industry tells you that you should look like, but we are our own fashion. What looks well on us is what we should be wearing.”