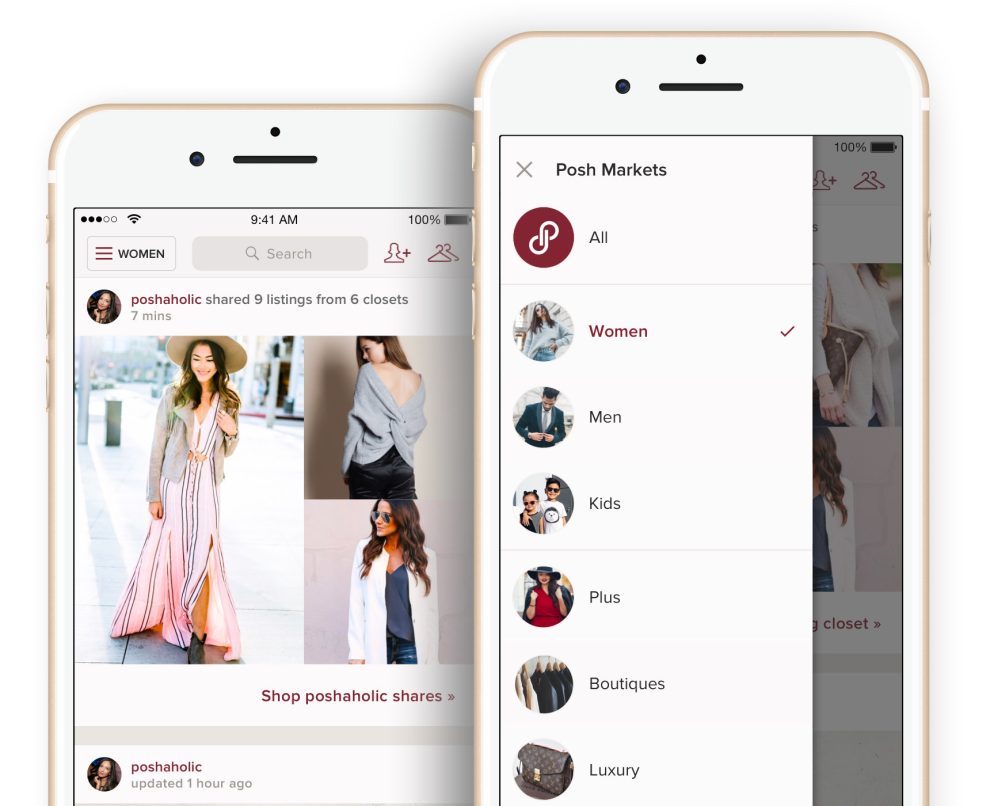 With a surge in online shopping brought on by the pandemic, consumer-to-consumer (CTC) apparel sites are having a moment. According to the 2020 ThredUp Resale Report, online thrifting represents one of the few resilient sectors during the pandemic, with growth projected at 69% between 2019 and 2021 and broader retail predicted to shrink 15% in the same time period. What’s more, clothing was the leading online category in 2018-2019; 59% of U.S. shoppers purchased clothing online, according to Statista. In response, CTC fashion sites have proliferated, each cornering a different segment of the online apparel market. Here’s a look at some of the top companies and how they’ve thrived under these unusual market conditions.

Poshmark was one of a few online retailers that decided to file a public offering in 2021. Announced at the beginning of January, the company was initially valued at about $3 billion — $42 per share. In fact, stock began trading at $97.50 per share, boosting the company more than 140% on its first day.

Poshmark’s model is most like eBay or Etsy; founded in 2011, it connects buyers and sellers to each other and takes a cut of each transaction. Sellers use the platform to resell their designer or high-end clothes, including popular brands like Lululemon, Free People, Vera Wang and Nike. Buyers use the platform to cut deals with sellers, follow specific closets and get recommendations from stylists.

The platform caters to most apparel consumer groups, including men, women and children. It facilitates shipping and posting, all of which can be done on a user’s phone. According to Statista, Poshmark was No. 29 on the list of most popular mobile shopping apps in 2019, with 6.83% of consumers using it (for comparison, the most popular app, Amazon, had a reach of 80.64%).

Part of the company’s success has been due in part to its positioning as a social platform. In 2018, Poshmark created Posh Markets, the interface that most users recognize today, which helps customers discover other members of the online community.

Like Poshmark, The RealReal is a resale platform, but its model is based on authentication of luxury and designer goods. It also focuses on accessories, specifically bags, sneakers, watches and fine jewelry. Instead of featuring profiles from several individual sellers, The RealReal is more centralized, sorting goods by category and comparing retail price to resale price.

Although The RealReal faced some scrutiny in 2019 for its authentication process, the company had a relatively solid year. In Q3 2020, total revenue was $78.1 million, and year-over-year revenue only decreased 4% despite the pandemic. The company also opened its Midwest flagship location in Chicago in October 2020.

“The pandemic has had a lasting impact on the resale market, and through the challenges of the past year, we’re seeing a mindset shift among our nearly 20 million members toward investing in and living by what we truly value,” said Rati Levesque, chief operating officer of The RealReal. “Investment pieces, the new capsule wardrobe essentials, and late ‘90s to early ‘00s vintage are the top trends yielding rising returns to sellers. As we enter a new year, the record numbers of consignors joining the circular economy are a bright spot paving the way to a more sustainable fashion future.”

The brand’s 2021 Luxury Consignment Report, released in January, reported that the average monthly volume of new consignors rose 20% during the second half of 2020, 35% of which were Generation Zers and millennials.

Of these popular online retailers, ThredUp is the least designer-oriented and the most like a traditional thrift store. The platform incentivizes apparel and accessory donations by sending out pre-paid collection bags, and it offers a small resale payout to users for every item sold. The inventory is less curated and features categories like “rescue,” for damaged items that can be purchased in bulk for cheap.

The model for ThredUp makes sense for a platform that centers its marketing on its environmental impact; it invests in the trend that younger consumers are more likely to support environmentally-sustainable companies. In 2019, 40% of Gen Zers and 30% of millennials bought second-hand apparel, according to the 2020 resale report. The report also found that 70% of consumers agree that climate change is important to address, and 43% of consumers said that they planned to spend more on sustainable brands in the next five years. ThredUp recycles donated apparel that it is unable to sell and notes the wear-and-tear on items that are far from new, meaning that cheaper deals are often available for thrifty consumers.

But ThredUp isn’t just a traditional online thrift store, either; last year, it launched a partnership with Rent the Runway’s Revive program, where retired Rent the Runway items are donated to ThredUp for resale. It also has subscription Goody Boxes, à la Stitch Fix, where buyers take a style quiz and receive a personalized box of clothing.

Although German company Mytheresa isn’t technically CTC, it operates under a similar model, establishing consignment-like deals from top luxury brands and consolidating them on its online platform. It also went public at the beginning of 2021 with an initial price between $16 and $18 per share for a total valuation of about $250 million.

“Mytheresa has grown into a global platform in luxury fashion,” said Michael Kliger, CEO. “Every day, we deliver an unparalleled personalized digital luxury shopping experience to customers around the globe and inspire their loyalty through elevated curation, exclusive offerings, engaging content and exceptional service. We are in a position of strength, underscored by our differentiated value proposition for brands and customers and our profitable growth that has proven to be enduring and scalable.”

It began as a brick-and-mortar boutique in Munich, Germany, and went online as Mytheresa in 2006. In its current form, Mytheresa is most like The RealReal, focusing on authenticated luxury and designer goods vended from a central system. Popular brands on the site include Gucci, Bottega Veneta and Tory Burch.

One up-and-coming online retailer to watch is Curtsy, a Gen Z-focused platform initially designed for sorority sisters at Ole Miss. Like its competitors, Curtsy connects apparel sellers and buyers, though it targets young women who are focused on rotating their closets over consumers primarily looking to make money. Curtsy received $11 million in its Series A funding round, led by Index Ventures, in late January.

“Consumer-to-consumer e-commerce, first pioneered by eBay, continues to be unbundled,” said Damir Becirovic of Index Ventures. “Dedicated platforms are rising that have a tighter relationship with their users and that facilitate more frictionless ways to transact a certain type of good. Curtsy has accomplished exactly this for young women and their desire to buy and sell clothing. Never before have we seen such a strong overlap between buyers and sellers on a consumer-to-consumer marketplace. We believe the incredible love for Curtsy is indicative of a large marketplace in the making.”

Gen Z buys 60% more clothing than previous generations, but keeps them half as long, Curtsy said. Existing apps tend to center on cleaning out the closet as opposed to rotation.

Furthermore, the platform helps users merchandise their items, autofilling category and brand and recommending a selling price. It also automatically improves images, fixes listing issues and deletes spam. These efforts lower the barrier to entry and encourage young people to use the app rather than donating clothing to thrift stores, the brand said.