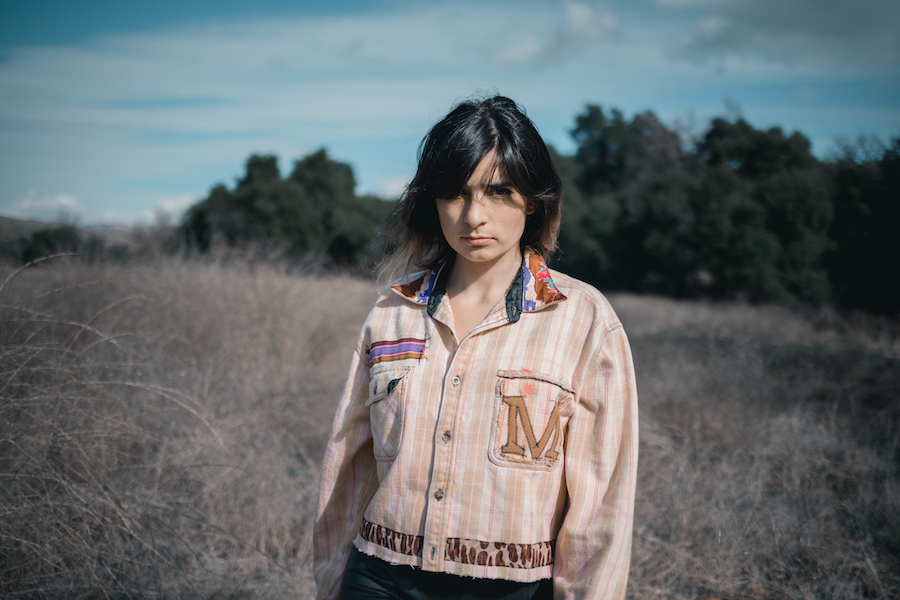 How the creative force behind Origami Crane chooses her folds

Mary Flynn-Gillies has always walked to the beat of her own drum. Now, as the owner and creator of Origami Crane Clothing, she is inviting other people to join her band.

“What I’m doing does have a unique style; it’s not necessarily for the masses,” she said. “It’s for that person that wants a distinctive style that says something about who they are. And that’s important to me too — being able to facilitate that person’s wardrobe.”

Origami Crane is more like an art collection than a traditional fashion line; Flynn-Gillies designs and makes each piece by hand over a number of days, meaning no two articles are exactly alike. And while some thematic similarities brings items together into pseudo-collections, almost all of her materials are from thrift stores, meaning that she can never replicate the sources.

Flynn-Gillies went to school for studio art and interior design, a career path she pursued whenever she felt that she “needed a paycheck.” But the opportunity to be creative has always been her motivation.

“Right now, I’m more excited and impassioned with doing the creation and, you know, the little bit of impact I’m making on the environment,” she said, referencing the time she invests into each garment. “That’s what’s driving me more than the dollar sign.”

The transition to fashion was natural for Flynn-Gillies, who spent much of her childhood designing and sewing unique items for herself. Her parents gifted her a sewing machine at age 12, and even then, she was able to see the potential beauty in old garments that people had donated.

“I was a thrifter — heavy, heavy thrifter — back in those days,” she said.

She described making stylish dresses for herself out of old mumus. It took her until adulthood to realize that what she was doing was interesting to anyone else.

“What I was doing at that time wasn’t really applicable — I thought — for fashion design,” Flynn-Gillies said. Then, she turned 60 and began to wonder what the next phase of her life would look like. “It all coalesced into one road trip, where I decided to take the plunge and take this idea of what I was doing when I was 12 and 13 and 14 years old and try to make a living at it. And not even making a living — having fun creating it.”

The pivotal road trip took her from Montana, her one-time home state, back to Seattle, Washington, where she primarily lives now (although she often spends time in Santa Monica, California). During that time for reflection, Flynn-Gillies turned to one of her favorite artists: Trevor Hall.

“I was on this road trip and I was listening to his music — I listen to him all the time, I’d heard this song a zillion times — and it came on, and it really spoke to me. It’s a little hard to describe,” she said, referencing Hall’s song “Origami Crane,” after which her brand is named.

“One of his main lines is, ‘How would you fold your origami crane?’ Which is a creative process,” she explained. “So my interpretation of that is that I’m putting my unique fold on a garment, and that’s allowing an individual show their distinctive style.”

Trevor, if you are reading this, you should expect a dedicated garment to come your way soon.

As for the actual business side of things, Flynn-Gillies turned to her daughter, Olivia Gillies, for help.

“My daughter was the one that started saying, ‘Mom — you — oh my God … these are amazing,’” Flynn-Gillies said.

With the help of her daughter, Flynn-Gillies set up a website and a Facebook page (things she dreaded doing on her own, she noted) and started “thrifting like crazy!” She also established a network of retailers, including Fred Segal Malibu in Hollywood, that sell her work. Her locations span from Seattle to Sun Valley, Idaho and Newport Beach, and most locations are women-owned businesses. She hasn’t had a ton of luck on DePop or Etsy — it just hasn’t been the right market for her higher-end pieces. And she doesn’t want the pressure of her own brick-and-mortar store. But mostly, she likes her current system because she likes working with the women who run her network of retailers.

“I love that community, and I want to be in support of their business. So it’s working right now,” she said.

The simplified business model — with emphasis on the creative process — allows Flynn-Gillies to focus on the main goals of the brand: individuality and sustainability.

“We always meant to be gender-neutral,” she said. “It kinda started getting a little bit more femme, but I don’t want those boundaries on my clothing.”

Flynn-Gillies wants anyone who thinks her clothes are cool to wear them, she said. That sentiment is perhaps the greatest in her Positive Vibe denim collection, which she said was one of her favorites to work on.

“It’s my way of not only reusing and creating zero waste, but it’s my way of putting positive energy out there into the planet, into the Earth. I really think that the intention that I’m putting into my garments gets infused out there, into the planet, into the universe and into the person that buys it,” she explained. “Even though people that are buying them might not know what is going on, I’m like, ‘They’re going to be in my denim, and there is goodness infused in the fabric! They’re going to feel it on some level!’”

For her upcoming spring “collection,” Flynn-Gillies is moving into plant-based dyes — slowing down her process even more, she noted — including turmeric and beet juice.

“I’m all about zero-waste and saving every single scrap and using it in the recreation of adjacent pieces,” she said. “Waste is a design flaw.”

Through it all, Flynn-Gillies said, she keeps in mind one quote from the Dalai Lama that reminds her why she takes the time to create her works of art: “If you think you are too small to make a difference, try sleeping with a mosquito.”

“I’m adopting that phrase and that quote because I’m not going to limit myself,” she said. “I can make a difference.”

Swap.com Partners with Find.Fashion for Visual Searching Powered by AI and Emotion Recognition