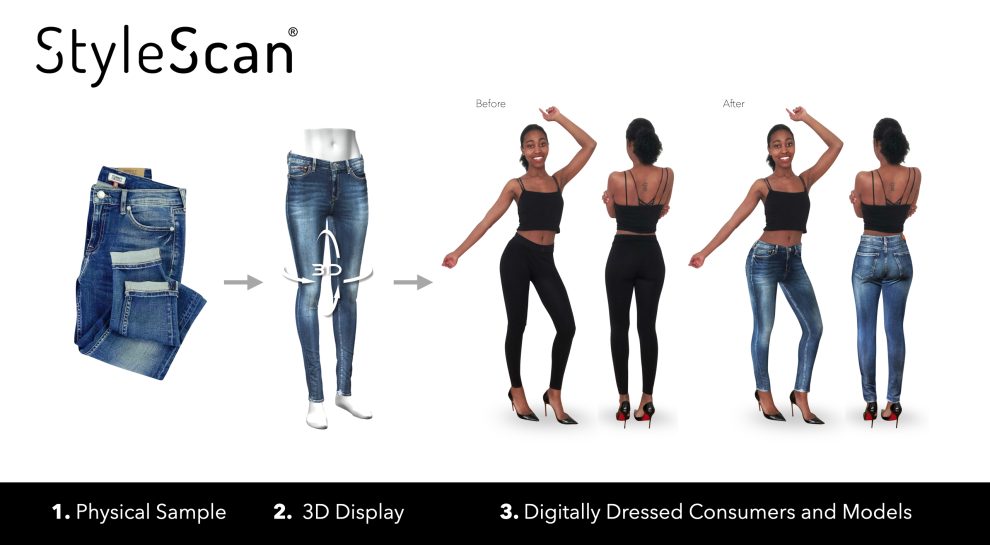 Larissa Posner has gone from working in front of the camera to breaking ground behind it. Formerly a catalogue model, she became a licensed investment advisor in 2010 and, soon after, made the leap into finance. She worked with a hedge fund that used proprietary software to predict the stock market. Posner found herself inspired by the fund’s elite problem solvers — financial modelers versed in mathematics and science — as she considered a problem of her own: discrepancies between how pieces of clothing look on models in e-commerce catalogues and the ways in which those same garments fit actual customers.

She knew this reality all too well. During her 10 years in finance, she had little time to shop.

“I worked in Midtown Manhattan, placing me steps away from luxury retailers, but I was too busy working to spend hours shopping in brick-and-mortar stores,” Posner said. “So, like most time-constrained people, I turned to e-commerce and ordered my Calvin Klein, Levi’s and Theory online. I maintained my style, but it usually took a few tries before I had the right look. As I knew from my time as a model, what you see online is not what you get in real life. Between stylists pinning clothing from behind and digital artists retouching images, pictures can be misleading.”

This frustration led to a revelation: StyleScan.

“I decided to solve the problem for consumers — who get brought down by clothing that is not what they expect — as well as for retailers and designers,” Posner, now CEO of StyleScan, continued. “After doing research and finding out that returns cost the e-commerce fashion-industry tens of billions of dollars per year, I knew that there had to be a better way. People order multiple sizes and colors because they don’t trust how the garment will look on them. That’s a negative for buyers and sellers.”

Uniquely connected with some of the sharpest technology minds in the world — computer-savvy over-achievers who use game theory to forecast outcomes on Wall Street and who deploy artificial intelligence to solve the most critical medical issues — she wondered if they could devise technology to predict women’s sizes.

“Bundling together the most brilliant quants I know, I commissioned them to run numbers and do research and development on this problem,” Posner said. “They attacked sizing as if it was a trend on the stock exchange and told me the answer: yes. That is how StyleScan was born.”

While Posner and her big-brained crew — who have won millions using computer models to beat blackjack and financial markets, helped design self-driving automobiles and devised a 3D body-scanning technology — are not the first to tackle this problem, they are the first to do it with advanced science on their side.

“Working out of Avenue Six Studios in Los Angeles, which is owned by one of our strategic investors, we use proprietary software and a special camera-system to convert physical apparel into a digital format,” Posner explained. “After a single garment is digitized, we can show it in 3D and on professional models of every shape and size — or even on the consumer herself. Via phones, tablets and laptops, the garments can be turned for 360-degree views. Instantly, a lot of the guess-work is removed.”

This is made possible through a computer algorithm that Posner and her team have nicknamed “Val” for “visualization algorithm.” Val is the ultimate arbiter of style and fit visualization. And because she is designed with machine learning at her core, she gets smarter with each piece of apparel she encounters.

“Other companies try to do similar things via Photoshop,” Posner said. “StyleScan’s algorithms remove the human element. We leverage cutting-edge AI with body scanning technology to predict a realistic pre-purchase visualization of apparel on the customer.”

Virtual try-on will lead to a decrease in returns, which will increase profits for fashion manufacturers and retailers, the company said. Additionally, it promises to reduce the industry’s impact on the environment — and representatives from some of the world’s most-respected design corporations and retail giants concur.

“Our current clients are household-name fashion manufacturers and retailers, each with more than $100 million in revenue,” Posner said.

StyleScan is set to roll out its technology to market in several stages. Currently, leading retailers’ inventory is being converted to 3D assets that will be viewable at 360 degrees. Next, digitally dressed models — of all sizes and ethnicities — will be shown wearing StyleScan’s 3D apparel. Ultimately, consumers will be able to replace the pictured models throughout the retailer’s websites with themselves.

“That,” Posner said, “represents our ultimate goal: for consumers to become their favorite models.”