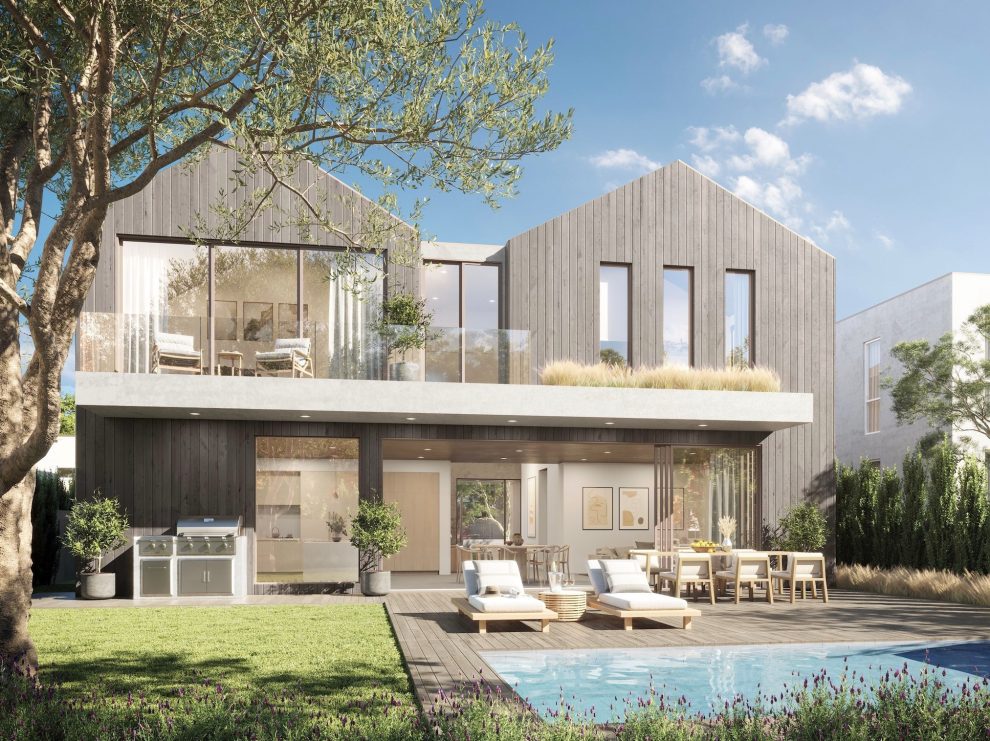 In the sprawling city of Los Angeles, a place renowned for its luxury hillside houses, charming craftsman-style bungalows, and Mediterranean-inspired homes, a new trend is taking over – and fast. Dubbed the ‘modern barn’ by multi-disciplinary design development and build company, WylanJames, the nouveau style isn’t just what’s next, it’s what’s likely here to stay.

Often being bought pre-completion, these highly sought-after homes are striking a powerful chord with a demographic of buyers that are looking for clean Scandinavian aesthetics paired with high accessibility. Nothing like the Fixer Upper style homes made famous by Chip and Joanna Gaines on HGTV, the ‘modern barn’ reflects a new and improved version, the barn 3.0, complete with soaring ceilings, sleek finishes, earthy color palettes, and a wellspring of open and airy spaces that oftentimes lead to the refreshment of a breathtaking pool.

One of the most promising developments to hit Los Angeles in recent years, WylanJames has been embracing its undeniable potential with the goal of revolutionizing not only the city’s housing options but its entire appeal. Straightforward yet distinct, modern barns implement the ever-alluring beauty of the minimal and the restrained, redefining what a ‘barn’ can be in our contemporary world while also firmly establishing their rising status as “The Next Big Thing.”

“For years, we have seen the popular Cape Cod style homes with black accents and white shiplap popping up in almost every neighborhood in Los Angeles,” says Brock Wylan, co-founder of the eponymously named design firm, WylanJames. “Homeowners have been drawn to the warm and familiar style, contemporary finishes, and east coast charm. But while it may be charming to some, that outdated varietal has grown tiresome with many, ushering in a new era for those looking for something new and fresh.”

Enter WylanJames, a dynamic ensemble not unfamiliar with being at the forefront of architectural design. Having taken the traditional vaulted gable architecture and paired it with Scandinavian design influences, the duo has created an exciting new spin on the ‘modern barn,’ complementing it with soaring ceilings, exterior and interior wood details, floor to ceiling windows, and bright open spaces throughout. These modern refinements represent not only a novel take on a timeless and incredibly popular iconic design but epitomize the perfect blend of warmth, livability, and architectural sophistication.

Since its inception, WylanJames has seen demand grow steadily for the modern barn, with buyers coming in droves saying “I have images of houses like these on my Pinterest dream house boards.” As an added bonus, prospective buyers can even work with the Wylan James team prior to completion to customize interior finishes, fixtures, and appliances to suit their particular needs and tastes.

A truly versatile design with options ranging from 3000-7000 square feet and prices typically ranging from $3.5-8 million dollars, there’s a modern barn for a growing pool of buyers looking for well-designed but attainable homes. And, perhaps best of all, they can be built nearly anywhere – from Santa Monica to Venice to Culver City and beyond – making them the perfect candidate for those looking to purchase in LA’s highly competitive market.

Much in the same way the “modern farmhouse” became not only a phrase but an empire, the ‘modern barn’ now marks the beginning of a new age all its own, an age poised to transform not only the city of Los Angeles but the entire design industry. Put plainly, it won’t be surprising to see the modern barn as the next real estate status symbol soon, with book and magazine publishers, furniture manufacturers, and retailers following suit to get in on the craze.