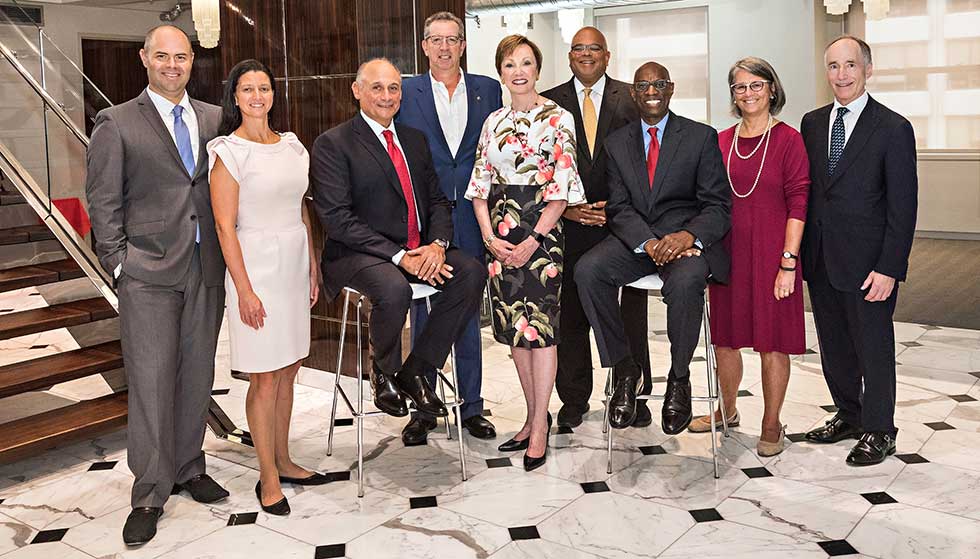 The legacy of a city can be revealed through its buildings. Examining the evolution of land use, property ownership, design trends, and building codes reveals the people who have lived, worked, and constructed a city—serving as threads that together make up a city’s tapestry describing where it came from, what it is today, and indeed, even offering suggestions about what its future may hold.

Last year, the Real Estate Board of New York, better known as REBNY, asked LaGuardia Community College to house its historical collection. Telling a unique story about the building of our city, the collection, and its vast records from the late 19th century through today, are housed at the LaGuardia and Wagner Archives in Long Island City, Queens. A focal point of New York studies, the Archives serves as a repository of collections that illuminate the social and political history of our complex city.

The REBNY Collection now exists alongside the mayoral and personal papers of nine former New York City mayors, as well as the records of the New York City Housing Authority (NYCHA), the New York City Council, and the additional collections of the LaGuardia and Wagner Archives. REBNY’s hope is that the collection will inspire some LaGuardia College students to work to create and maintain a vibrant city by becoming the builders and the creators of our neighborhoods.

Since its inception, REBNY has been committed to representing the most knowledgeable and talented real estate professionals in the industry. Originally formed in 1896 as the Real Estate Brokers of New York, and later renamed the Real Estate Board of New York in 1913, the Board was founded as a forum for facilitating real estate transactions, advocating in favor of its members’ interests, promoting the exchange of vital real estate information, and setting ethical industry standards and practices. Among REBNY’s early 20th century accomplishments, the most notable was the assessment of New York Central Railroad-owned land set aside for the “Westside Improvement Project” formulated by Robert Moses, which led to the development of the Henry Hudson Parkway and Riverside Park. In addition, with accordance to the effectiveness of the first Brokers’ License Law, REBNY worked towards the enhancement of the industry’s professionalism through considerable investments in real estate courses taught at the Y.M.C.A and Columbia University.

During the Great Depression, the New York City real estate market declined in conjunction with Wall Street as property values plunged, financing sources became scarce, and owners were left with almost no income to pay burdensome taxation. To combat the impact of the Depression, REBNY focused its efforts to slash the real estate tax in half, promote infrastructure improvements such as the completion of the 8th Avenue subway, advocate against the setting of rents at below-market rates, and work with City officials to reduce disproportionate government expenditures. At this same time, the Board established its research arm in lieu of its vocation as a medium for the exchange of market information. Early reports from the Research Department included studies on pedestrian foot traffic in important retail locations, an analysis on occupancies in elevator apartments, and a report on Manhattan’s job and population declines due to low housing production, traffic congestion, aging schools, lack of promoting the borough’s culture, and excessive property assessments.

As the United States entered the Second World War, REBNY fought against federal legislation such as the “Emergency Price Control Act of 1942” that placed residential rent control measures in wake of wartime economic conditions. However, those measures passed and remain in effect to this day. Similar proposals emerged for establishing commercial rent control measures, which the Board opposed and was successful in defeating. Other wartime efforts included promoting the creation of a “Fashion Center” within New York City, the establishment the Board’s “Most Ingenious Deal Award,” and the development of the REBNY “Exclusive Sales Listing.” As WWII concluded, REBNY focused its efforts on releasing a series of recommendations to avoid post-war excessiveness that ushered in the Depression.

At the beginning of the 1950s, REBNY developed a more robust and comprehensive approach towards its research analyses as Board members requested a series of report publications to fulfill REBNY’s reputation as a reliable commentator on New York City’s real estate affairs. During this period, REBNY initiatives included advocating for the development of the public transit system, demolition of the Third Avenue Elevated Train (El) to create room for east side residential development, and promoting Park Avenue’s transition to focus on commercial real estate ventures.

Moreover, REBNY found itself in eventual support of the Mitchell-Lama Housing Program that aimed to provide affordable housing to middle-class New Yorkers. By the same token, the Board was in favor of the 1961 Zoning Resolution. At the time, housing production flagged as residential rent controls had shifted capital funds elsewhere and foreclosure rates climbed. Nevertheless, demand in the office market skyrocketed as the City competed with emerging suburbs to attract office workers and residents. The boom in commercial real estate was followed by a deep economic downturn in the early-to-mid-1970s caused by cyclical dips, the exile of municipal government from public borrowing markets, and the unforeseen spike in Middle East oil prices.

To combat fiscal and economic troubles, REBNY leadership witnessed the need for a full-time, paid president, along with a larger professional staff to establish the Board as a prominent force to weigh in on a broader range of public interests. Nevertheless, the economic situation rapidly improved in the 1980s as real estate values soared to historic peaks. REBNY’s work to prolong the boom included changing the commercial real estate property assessment format to be based off 45 percent and deregulating luxury priced units from residential rent control measures.

Under the leadership of Chairperson Bernard H. Mendik, REBNY’s membership reached its 5,000 mark in the 1990s and demonstrated a philanthropic shift for the Board as it focused on offering technical expertise and funds to social service organizations to care for New York’s homeless population, develop low-income owner-occupied housing, and improve the public education system. During this time, REBNY successfully united thousands of New Yorkers in a multi-pronged government and public relations campaign against a proposed city realty tax hike of 60 percent by staging a “Boston Tea Party” at New York Harbor. Other efforts included support of the Lower Manhattan Plan, providing crucial aid in eliminating the New York State Real Property Gains Tax, achieving a 50 percent reduction in transfer taxes for real estate investment trusts, working with legislators for a fire sprinkler law that exempts existing apartment buildings, and backing a law to save owners costs for proving overassessments.

Furthermore, the Board demonstrated its commitment to broker members via the creation of two distinct residential and commercial divisions, as each featured a unique board of directors and special agenda to address respective member needs. At the dawn of the 21st century and in wake of the September 11th terror attacks, REBNY established a directive to keep rents at pre-9/11 amounts, assisted companies displaced by the destruction, and created a task force to transmit security advisories to members. In the mid-2000s, REBNY launched its Legal Line for answering member inquires and establishing the REBNY Action Center as a collaborative forum to rally and engage members in purposed legislation and other issues.

In 2015, REBNY’s longest serving president, Steven Spinola, received The Harry B. Helmsley Distinguished New Yorker Award. “We are enormously proud to honor our dear friend Steven Spinola for all the spectacular work he does for our industry. For nearly three decades, through good times and bad, Steve’s professionalism, thoughtful advocacy, and generosity of spirit has inspired our community,” said REBNY Chairman Rob Speyer.

REBNY’s current president, John Banks assumed the role of president-elect in 2015. In announcing Banks’ appointment, Speyer said, “Throughout his extraordinary career in both the public and private sectors, John Banks has earned widespread acclaim for his wisdom, insight, and trustworthiness, as well as his ability to build consensus.”

In 2017, REBNY’s Board of Governors voted unanimously to approve William C. Rudin to succeed Rob Speyer as REBNY Chairman. Rudin is one of America’s strongest and most influential voices, advancing pro-business public policy in Washington, D.C., Albany, and New York City. His focus is promoting policies that will continue diversifying the city’s economy in order to generate jobs and bring renewed vitality to New York City’s businesses and its commercial and residential real estate marketplace.

At the 2018 Banquet, REBNY honored outgoing Chairman Speyer for his record of service and civic leadership that has made REBNY a stronger and better organization than ever before. While presenting The Harry B. Helmsley Distinguished New Yorker Award to Speyer, former REBNY Chair Mary Ann Tighe praised his dedication throughout his tenure as REBNY Chairman. “Rob is an all-around great New Yorker, and on a personal level, he is an inspiring leader, a true gentleman, and the most generous friend,” said Tighe.

New York City’s real estate continues to play an integral role in its history and growth. That is why REBNY donated its extensive records—kept since its founding in 1896 and including data like property transfers, mortgage details, and zoning alterations on every building in Manhattan—to LaGuardia Community College. Preserving these records will foster historical inquiry, inform public policy, and cultivate public awareness of the real estate industry and its role in shaping New York City’s iconic skyline.

REBNY’s outlook for the City’s future is an optimistic one, as our industry helps to guide the City forward with advocacy to advance sensible urban planning, responsible development, and environmental sustainability to keep New York the greatest city in the world.