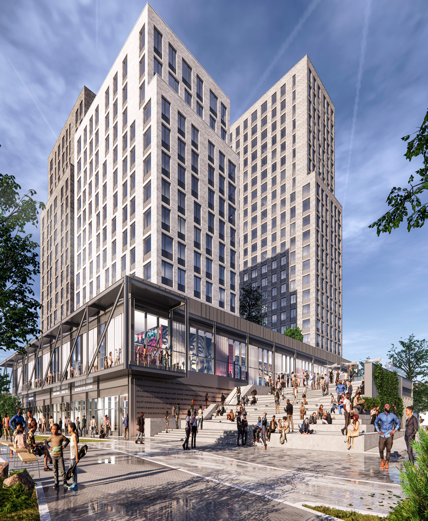 For the construction of the project, EBM will be responsible for approximately 2,000 linear feet of free-standing guard rails and ramp rails throughout the building, as well as handrails for ADA-compliant ramps. In addition, EBM is fabricating and installing mesh guard rails on the second-floor terrace, 500 feet of exterior mesh rails, and 400 feet of free-standing guard rails in the stair shafts. The company will also install the steel-dunnage platforms for the cooling towers, ramp rails for six smoke hatches and bulkheads, stairs in the elevator shafts and mechanical room and all of the pit and hatch ladders.

“Being a part of this project and knowing the impact it will make on immediate and surrounding areas is extremely gratifying,” says Christella Xu, president of EBM. “Bronx Point is our second affordable income project this year for L+M and we are honored to be part of a group bringing so many benefits to this community in terms of housing, education, recreation, and entertainment.”

The architect for the building is S9 Architecture and the open space is designed by Marvel Architects and Abel Bainnson Butz. The 530,000-square-foot development will include more than 56,000 square feet of educational and community space and more than 12,000 square feet of retail space. The development team includes Type A Projects, a WBE developer, and the project will meet a 35% M/WBE participation goal. Located on city-owned land, Bronx Point is being financed by public and private sources, including the New York City Department of Housing Preservation and Development (HPD), the New York City Housing Development Corporation (HDC), Empire State Development, Wells Fargo, and additional private funding.