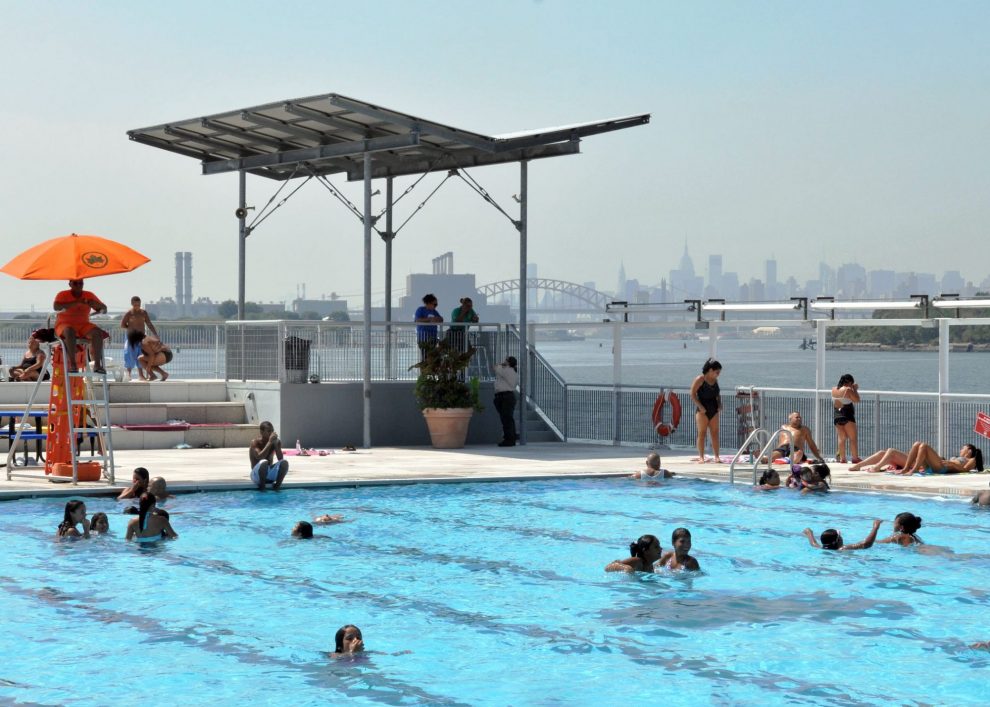 Although it’s technically safe, you may not want to swim in the East River. Swimming on the East River, however, is an entirely different story. The Floating Pool Lady is not just a pool. It’s a floating pool located in a retrofitted barge that’s currently docked in Barretto Point Park in the Hunts Point neighborhood of the Bronx. Best of all, it’s the only floating pool in the country.

Floating pools aren’t new to NYC. After a wave of immigration and a growing awareness of public health and hygiene, the city debuted the first free public floating baths in 1870. These were barge-like structures with a well in the middle, kept afloat by pontoons.

The wells were lined with slats that allowed river water to flow through. By 1911, the city had 15 floating baths, with an estimated yearly attendance of over 1.8 million people. However, the growing pollution of the Hudson and East Rivers made floating baths much less appealing, and by the 1940s, all of the facilities were taken out of commission.

The floating pool experience was entirely gone for nearly 70 years. But in 2007, The Neptune Foundation purchased a cargo barge and renovated it to include a half Olympic-sized pool, changing rooms with lockers, and a sprinkler station. The Floating Pool Lady was initially docked at Brooklyn Bridge Park but moved permanently to Barretto Point Park a year later. Unlike the floating baths of yore, the water in the Floating Pool Lady is chlorine-treated, so there’s no need to worry about polluted water.

Like all of the NYC Parks Department’s outdoor pools, the Floating Pool Lady is completely free and open from 11 a.m. to 7 p.m. Make sure to bring a combination lock, as personal items other than towels aren’t allowed in the pool area and locks aren’t provided.