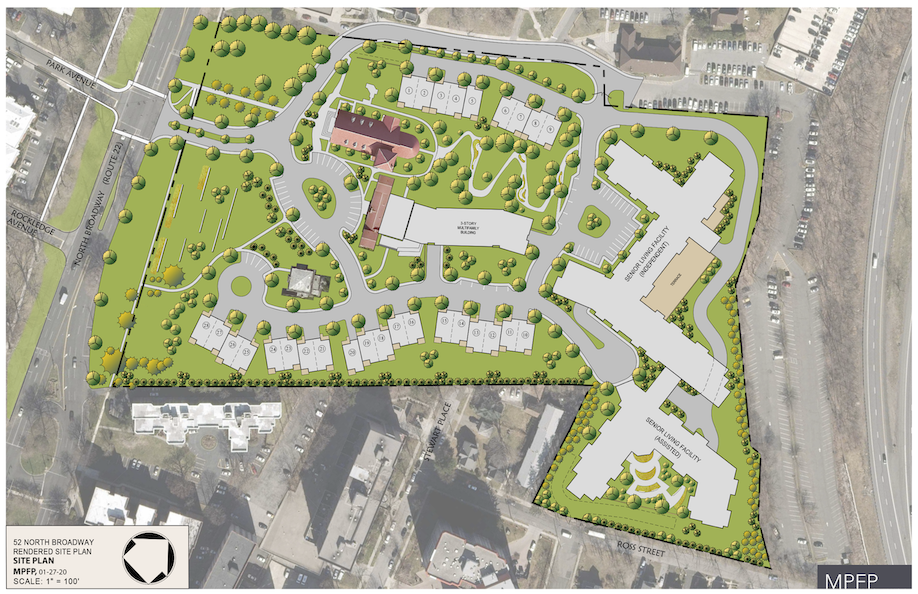 The plan for the redevelopment of the former Good Counsel school campus at 52 North Broadway in White Plains took a major step forward Monday night when the White Plains Common Council unanimously voted to accept the environmental findings, zoning amendment and master plan for the 16-acre property to allow construction of 335 independent and assisted living apartments for seniors, 28 townhouses and 48 multi-family apartments.

The Council action concludes an extensive five-year review under the State Environmental Quality Review Act (SEQRA), establishes a Planned Residential Development (PRD) Zoning District for the site allowing for the mixed residential uses and approved a Master Plan setting forth the conceptual development program for the property. Remaining actions by the City include a detailed site plan review and a review by the Historic Preservation Commission. The  State Office of Historic Preservation has already given its approval to the redevelopment plan.

The alternative plan for the site that was agreed to by the Council was initially presented in January 2020 by the property owner, WP Development NB LLC. The plan reflected a significant reduction in scale, density and building height from an original proposal, as well as expanding the senior housing component and enhancing historic preservation elements, while maintaining open space on the site’s North Broadway frontage.

Specific elements of the plan include:

Historic preservation: The approved plan includes maintaining the Chapel of the Divine Compassion for ongoing use, preserving the historic Mapleton House at its present location and preserving the west wing of the former Convent that faces North Broadway, while adaptively incorporating it as part of the new development.

North Broadway Greenspace: The plan provides for public access to the 2.3-acre front lawn of the campus facing North Broadway. Not only does this preserve open space, but it maintains the street view of the property. The entire campus will have extensive new landscaping.

Reduction of parking and traffic: The approved plan proportionately reduces the number of parking spaces to 450 from 655 in an earlier proposal, and projected vehicle trips in and out of the site at peak times are reduced by up to 43%. There will be no access from Ross Street except for emergency vehicles.

The approved plan is in full compliance with State Department of Environmental Conservation (DEC) requirements related to a landfill area at the southeast corner of the property. The project complies with state regulators’ requirements to safely cap the landfill during construction. Any construction activities within the landfill area will be subject to DEC review and approval. Roughly half of the landfill area will be permanently capped under a building. The balance of the area will be covered with a new capping membrane and a new topsoil covering. In a March 8, 2019 letter to the City of White Plains, the DEC stated that “sampling of the [fill] material does not show that it is contaminated at levels considered hazardous.” The soil samples were provided to the state by an independent environmental consultant hired by the City of White Plains.

For more than 100 years, the property was exempt from real-estate taxes when it was owned by The Sisters of the Divine Compassion for educational and religious use. Since its purchase in 2015 the property has been on the tax rolls, generating significant revenue for White Plains. Once the proposed residential community is developed, it will provide substantial additional tax revenues to the City of White Plains and its school district.