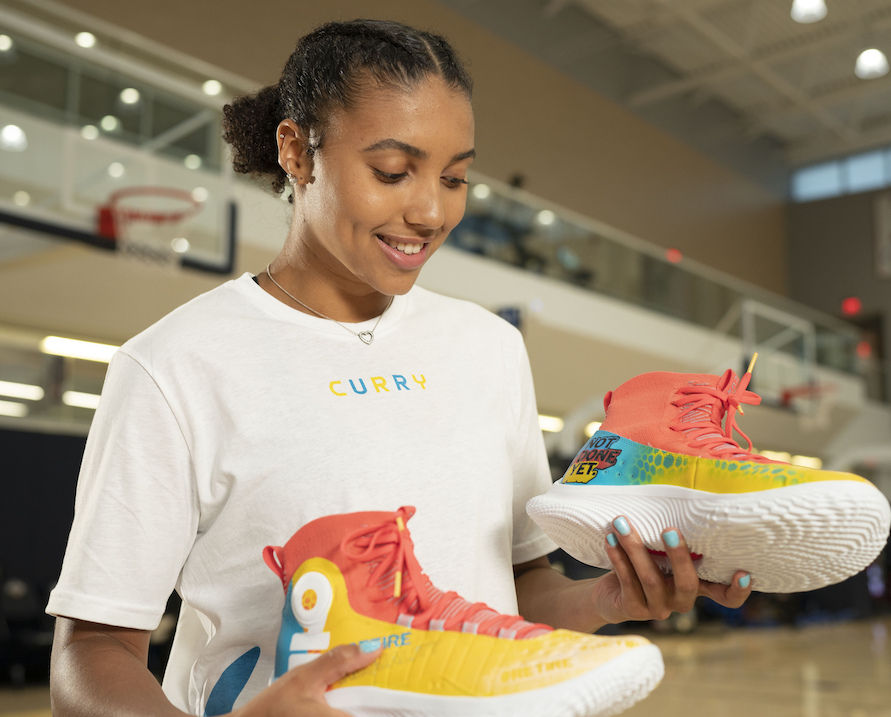 TIAA is once again working alongside top athletes to spotlight the startling reality that women have an average of 30 percenti less retirement income than men. The company announced a collaboration with UConn Huskies Guard Azzi Fudd, the top-ranked basketball recruit in 2021, and Curry Brand, Stephen Curry’s bespoke apparel and footwear line produced by Under Armour. The parties have collaborated to debut nine one-of-a-kind, hand-painted #RetireInequality sneakers. The sneakers were custom designed by David “DEZ” Zambrano and Moe of Creative Custom Kicks and symbolize the progress that has been made over the past 50 years since the passing of Title IX legislation and all of the work that still needs to be done.

Three pairs of the sneakers will be sold through NTWRK on June 23-24 – the anniversary of the passage of Title IX – with all proceeds benefiting The Equity Project™, powered by the Women’s Sports Foundation.

“On average, women still earn just 82 centsii on the dollar and retire with 30 percent less income compared to men – a gap that the pandemic has exacerbated,” said Stephen Tisdalle, TIAA’s Chief Brand and Demand Generation Officer. “We launched the #RetireInequality campaign during March Madness this year to celebrate the advances made and to raise awareness of gender wage and retirement gaps. The collaboration with these all-star athletes and designers further helps tell that story in an effort to advance the pace of progress for women and society overall.”

TIAA launched its #RetireInequality campaign in March 2022, aligned to Women’s History Month and just ahead of the 50th anniversary of Title IX, the landmark law that drove equity in education and opened the doors of college sports for women. The campaign brought together some of the most influential players and coaches in the NCAA and WNBA – women who have played pivotal roles in stamping out inequities in the sports arena – to bring awareness and educate others about why the fight to retire inequality still matters.

As a #RetireInequality campaign ambassador, Azzi Fudd became passionate about encouraging young women, particularly athletes, to take hold of their financial futures, and was eager to team up with TIAA and Curry Brand for this collaboration. As part of the collaboration, Azzi will also gift pairs of the sneakers to women she finds personally inspiring, including TIAA CEO Thasunda Brown Duckett and her parents.

“This partnership with TIAA and Curry Brand is a really special one for me,” said Azzi Fudd. “I am proud to have helped design these incredible shoes that pay homage to the women who have paved the way for gender equality, while spreading awareness around the retirement income gap for athletes and women across the board.”

“Azzi Fudd is the best choice to start a brand relationship like this because she is the next face of women’s basketball and has been a part of SC30 Inc. and the Curry Brand family since she was an invitee to the All-American Camp,” said Stephen Curry.