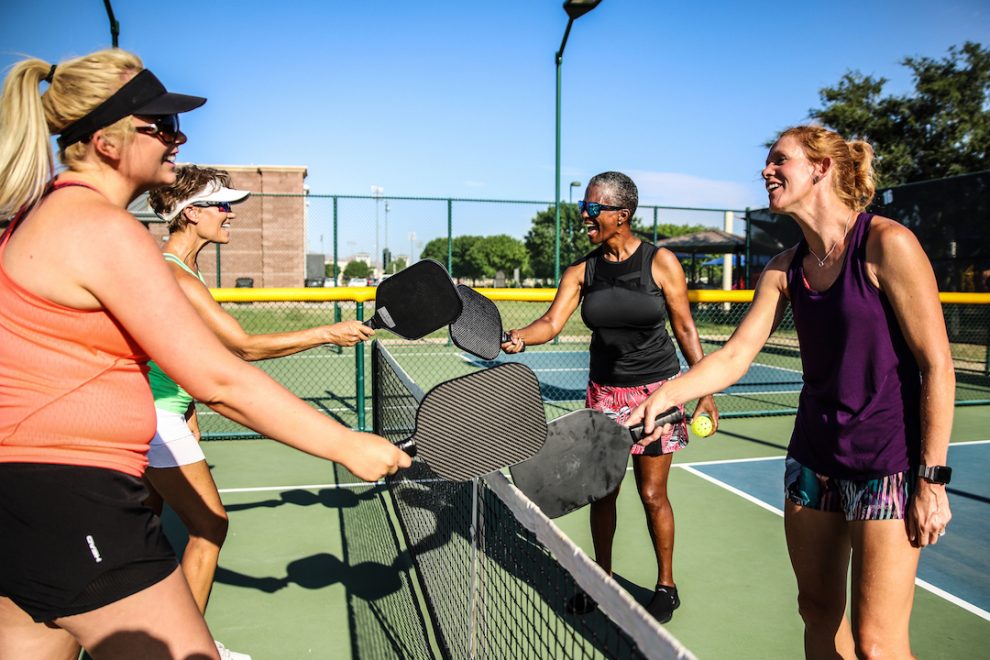 One summer Saturday in 1965, on Bainbridge Island, a short ferry ride from Seattle, Washington, three enterprising dads — Joel Pritchard, Bill Bell and Barney McCallum — were determined to cure their families’ boredom. Using an old badminton court, some ping-pong paddles and a perforated plastic ball, they borrowed some aspects of badminton, tennis and ping-pong to create a new game for their loved ones to enjoy: pickleball.

The sensation soon began to catch on around town, and over the course of the next 56 years, the game went from a spur-of-the-moment solution to stir up family fun to a professional sport with an annual National Championship, U.S. Open and a devoted player base. The game has evolved from its original handmade equipment and simple rules into a popular sport throughout North America and is now taking off in other parts of the world.

Despite the sport’s name, it does not involve any pickles. However, accounts of how the name originated differ. According to Joel Pritchard’s wife Joan, she started calling the game pickleball because the way the different sports were combined reminded her of the pickle boat in crew where oarsmen were chosen from the leftovers of other boats. According to Barney McCallum, on the other hand, the game was named after the Pritchards’ dog Pickles who would chase the ball and run off with it. Others claim both accounts may be true. They state that in the early years, no official name was assigned to the game. However, a year or two after the game was invented, the Pritchards’ purchased a cocker spaniel and named it Pickles. As the game progressed, an official name was needed and “pickleball” was it.

True to its origins, modern pickleball is played on a badminton-sized court with the net set to a height of 34 inches at the center. It is played with a perforated plastic ball and composite or wooden paddles about twice the size of ping-pong paddles. It can be played indoors or outdoors and is easy for beginners to learn, but can develop into a fast-paced, competitive game for experienced players. Pickleball can be played as singles or doubles. No special apparel is required, just comfortable and appropriate clothing for a court sport. Equipment is inexpensive and easily portable. The game can has gained particular popularity in school physical education programs and in adult living communities. The U.S.A. Pickleball Association serves as the governing body for the sport, which maintains the rules, promotes the sport, sanctions tournaments and provides player rankings.

It seems that Pickleball USA’s chief marketing officer George Bauernfeind couldn’t have put it better when he said, “My phrase is, ‘there’s nothing stopping pickleball.’”

There is, indeed, nothing that can stop pickleball, it seems, not even the COVID-19 pandemic. While public courts were temporarily closed and large competitions were canceled in 2020, sales of portable pickleball nets have increased greatly since the beginning of the pandemic. The demand for portable nets was so high, Bauernfeind said, that they “couldn’t keep [them] on the shelves.” As people looked for ways to keep family members entertained, get some fresh air and see some friends and neighbors while keeping a safe distance from one another, at-home pickleball competitions thrived.

As the U.S. continues its various stages of reopening in different states, people are desperate for the kind of friendly community atmosphere pickleball creates in order to reconnect with their friends, family and neighbors.

“There’s just something about this sport and the friendliness of it that keeps people coming back,” Bauernfeind said.

Part of pickleball’s unique draw is that it has cross-gender and intergenerational appeal. Partners of any gender can play together and everyone from young children to the elderly can manage to keep up on the court. The rules are simple, the court is small and at the end of the day, the very purpose of pickleball’s invention is to have community fun for everyone.

“One of my favorite parts is that it doesn’t really matter where you come from or what you do, it’s definitely more of a sport for anyone than I’ve ever seen anywhere,” said professional pickleball player Ben Johns.

Carr, echoing Johns’ sentiment, said, “You can get a lot of people from a lot of different ages, movement levels, different sports and they can all go and play pickleball and they can enjoy it.”

Pickleball has certainly proven its widespread appeal, with the 2021 Pickleball Participation Report reporting that the number of players in the United States has increased to 4.2 million. Of the 4.2 million players, 2.8 million were “casual” players who play one to seven times a year, while 1.4 million were “core” players who play eight or more times a year. Of all participants, 61% are men and 39% are women, and the average age for all players is 38.1 years old. The average age for core players is 47.5 and casual players 33.6 years old. U.S. regions with the largest number of core participants were: the South Atlantic region (Florida, Georgia, South Carolina, North Carolina, Virginia, West Virginia, Washington, D.C.) with 283,000 players, the East North Central region (Wisconsin, Michigan, Illinois, Ohio, Indiana) with 262,000 players, the Pacific region (California, Oregon, Washington) with 255,000 players, the Mountain region (Arizona, Nevada, New Mexico, Utah, Colorado, Indiana, Wyoming, Montana) with 155,000 players and the Middle Atlantic region (New York, New Jersey, Pennsylvania, West Virginia) with 142,000 players.

If an individual has any background in similar sports, they can develop their skills rather quickly.

“It’s very easy to pick up,” said Bauernfeind. “I think many folks who have not tried it before can learn it in a pretty quick fashion. You don’t really have to be athletic, but if you’ve picked up any paddle or racquet, you will pick this up pretty quickly.”

While both Carr and Johns have backgrounds in tennis, it’s pickleball’s unique charm that kept them coming back to the courts time and time again.

“I think what makes pickleball so special is the social aspect,” Carr said. “The first tournament I left on a total high. I was giddy happy, and I’ve been playing ever since.”

And she’s been winning ever since, too. Carr has won numerous gold medals since she started playing in 2014, including Women’s Doubles Pro at the 2018 Tournament of Champions and the 2018 U.S. Open.

Ben Johns is also no stranger to a gold medal. In fact, he is currently ranked No. 1 in the world for men’s doubles, mixed doubles and men’s singles by the Pro Pickleball Association (PPA).

“It’s a very easy to improve at game so that I think for people is very addicting,” Johns said. “When you know you’re improving, you can feel it, you can see it, it makes you want to take it in and get more of that.”

And more pickleball is exactly what players and fans are looking forward to as 2021 continues. The 2021 Margaritaville USA Pickleball National Championships is set to be held at the Indian Wells Tennis Garden in Indian Wells, California from December 6 through December 14.