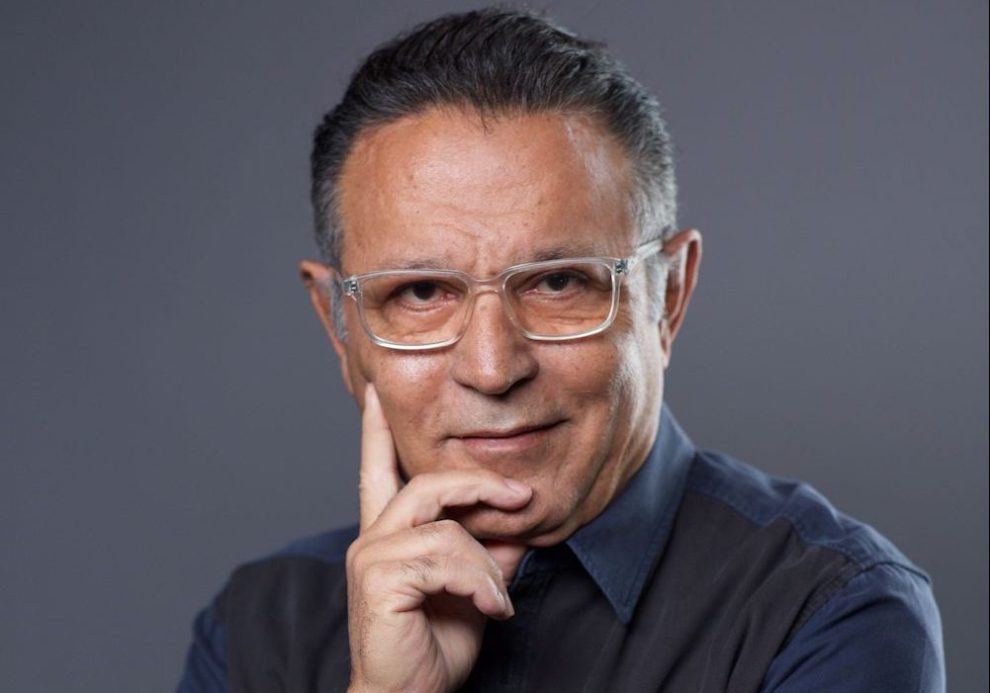 Rags to riches stories are among the most clichéd of Americana, ever-present in our collective cultural vernacular yet endlessly appealing and satisfying. The fact that Elie Tahari’s story follows this path comes as no surprise, yet the man himself is surprising, which makes his journey all the more inspiring. We had the honor of conducting a sit-down interview with Tahari at his Central Park West home. We had just viewed the documentary on his life, “The United States of Elie Tahari,” and wanted to hone in on a few key points. We arrived at the grand building and were greeted by the doorman, who asked who we were seeing. We said “Elie Tahari,” and he smiled wide and said, “Oh, the big man.” We were directed to the desk and then to a suite of elevators.

The doors opened into a long hallway filled with sculptures. Scott, Tahari’s publicist, greeted us. We turned the corner, and a short beaming man with silvering hair boomed in a thick, Israeli-accented voice, “Welcome to my home Margaret and Jadan. I am so happy to have you here.” Tahari’s voice is delicious, a smooth combination of a warm baritone with a husky foreign precision to his words. The man’s countenance at once seemed self-assured yet humble, accomplished yet approachable. He directed us to a couch and got to the meat right away. “What did you think of the documentary?” he asked. I answered, intentionally foreshadowing, “It left me with some follow-up questions.”

In the documentary, we learn that Tahari’s Persian-Jewish family emigrated from Iran before the fall of the Shah. They spent time as refugees in Israel. Tahari ended up in a boarding school. From there, he served in the Israeli Defense Forces (IDF) and then attempted to return to his family, only to be turned away. He shared how his brother, an employee of El-Al, the Israeli airline, had a ticket for the UK, and Tahari wrote his name in and flew to meet a love interest there. Upon his arrival, he discovered she was already married. In the analog world, news travels much slower. Tahari spent some time in Europe before deciding he had to move to America. The old-world class system made it hard for an immigrant, and a Jewish one at that.

Tahari’s arrival in the US reads like the most cliché of clichés. He tells us that he didn’t speak much English and at JFK found the taxi stand and said, “Take me to Central Park.” All he knew of New York was yellow cabs, Times Square and Central Park. The cab took a detour through the bright lights of Times Square before dropping Tahari off in Central Park. When Tahari arrived there, he knew he never wanted to leave America, though he didn’t know that Central Park would end up being his temporary home.

Finding work in New York proved difficult for a Hebrew-speaking, Persian Jew with little working knowledge of English. His money dwindled rapidly. He decided to sleep on a bench in the park, while figuring out how to make it in this city.

The story seemed unbelievable as we sat in his terraced home hundreds of feet above Central Park. He stood and pointed, saying the bench was only a few hundred yards away. A rags to riches figure indeed.

I asked him how he managed to get on his feet. He shared that a few gentlemen offered to connect him to the Jewish non-profits on the West Side. But they all said that as an Israeli, he should return to Israel. So he found the YMCA and secured safe housing, while a man connected him to a job and accommodation at a men’s shelter in the Village. From here, his life changed as he got connected to a maintenance job that happened to grant him access to a textile showroom. There, he gave his opinion on something and the rest, as they say, is history.

I stopped him right there and said, “Elie, each of these scenarios requires the ability to persevere and be unafraid to ask people for things. Where does that come from?” He looked pensive and said, “You know, as a refugee and child who gets put into a boarding school, you have to find a reason to continue. I made it to America. What was I gonna do – quit? No, you maintain hope. You must overcome. This is what makes character; this struggle makes the man.” Margaret and I were struck. The idea of struggle is such a part of American culture yet so missing from the expectation of the current generation. As if Tahari read our minds, he said, “Young people need to struggle to succeed. It’s what refines you and your ideas.” He asked me what the second part of my question was, I reminded him.

“Ah yes, to be unafraid,” he said. “You see, when I was in boarding school, I saw how the bullies would prey on the weak ones. I didn’t want to be weak, and I didn’t want to be a bully, so I decided to be the friend of the weak kids, and the bullies left me alone. I learned that if you are kind to people and approach them openly, then you are a better person for it, and doors can open that you never knew possible.” He told us an anecdote about food in the mess hall of his boarding school, stating that the big guys would take extra servings and the small kids would get nothing. So Tahari would give his food away, and then the big kids would feel bad that the nice guy didn’t have food, so they would share with him. In this way, Elie ensured the smaller kids got food, engendered goodwill with them and got the respect of the bullies.

Scott stopped him there and said, “Elie, you know I’ve heard all your stories, and I’ve never heard this one.” Tahari smiled and said, “The interviewers ask probing questions.”

Open, earnest, resourceful and persistent qualities made Tahari a household name and earned him the respect of moguls and doormen alike. As the inventor of the tube top, he rose to fame in the disco era and shaped womenswear for decades, building a nearly billion-dollar business in the process. Tahari is one of the last remaining designers who controls his own name and company, rarified with the likes of Ralph Lauren and Giorgio Armani. Yet his rags to riches tale and abundantly humane nature make him all the more unique. His story of a Persian refugee turned Jewish immigrant, turned homeless New Yorker, turned electrician, turned fashion designer, is truly a classic American tale.

Living only a few hundred yards from the Central Park bench he once called home, Tahari is living proof that the bravery and hope that created this nation is still alive today. As I left his home, I couldn’t help being reminded of something else people don’t say too often these days, but is nonetheless as true as ever: