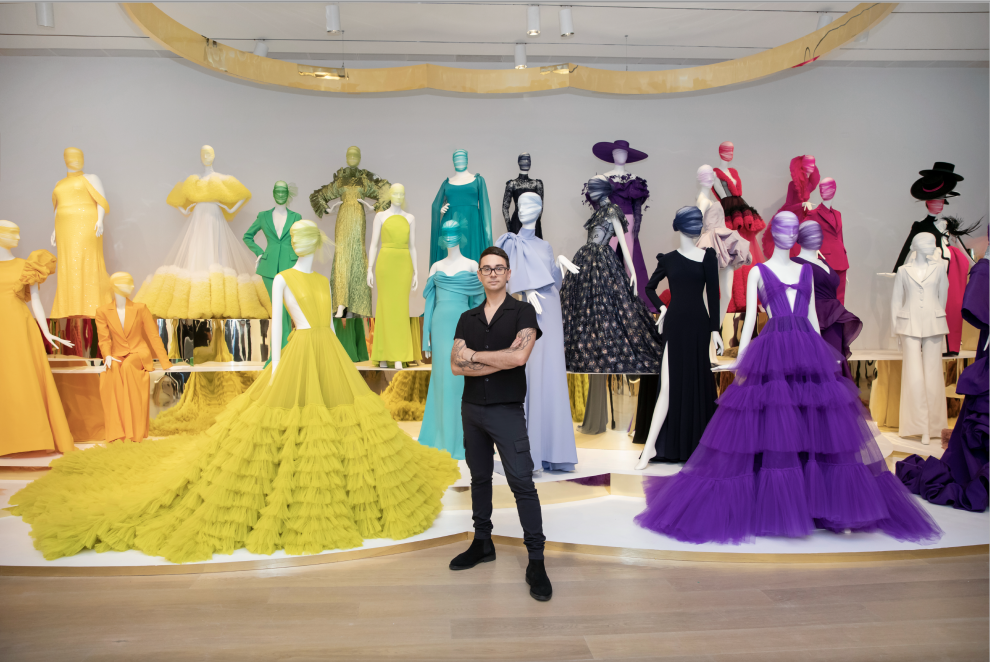 From the New York Fashion Week runway to red carpet awards season in Los Angeles, Christian Siriano is the man you want to see. Ever since Siriano first stole the show as the winner of season four of “Project Runway” in 2008, his bold and beautiful designs have been leaving their mark on fashion and culture. Fourteen years later, Siriano’s eponymous brand is thriving, and has dressed everyone from everyday women to celebrities and fashion icons like Cardi B, Kim Kardashian, Lady Gaga and Michelle Obama, just to name a few.

“From when we started the company around 2008, we were just able to build and grow and turn it into really this luxury lifestyle brand, where we kind of have all tiers of shopping,” Siriano explained. “[We have] things that are on the scale of couture clothes to the most wearable things that can be sold at a mass retailer. That’s been really great; we’ve kind of built [the brand] over the years doing that.”

Siriano has never strayed away from making a statement. After all, who could forget the iconic Billy Porter tuxedo dress moment he created for the Oscars in 2019? Siriano has also long been a trailblazer of size inclusivity in the fashion industry, dressing plus sized icons like Lizzo and Ashley Graham.

“We’ve had a huge celebrity following and a red carpet following, which has been really great,” Siriano said. “We’ve gotten to dress some of the most amazing people in the world.”

“We just showed for fall 2022, and that collection was so exciting,” Siriano said. “We got to show at the Empire State Building, which was amazing and iconic and felt very special [and] very New York, now that Fashion Week was back and people were in person and seeing shows. So, I wanted the collection to feel somewhat powerful and romantic like that feeling was.”

In addition to finding inspiration in the show’s location, Siriano also delved into the feelings that many of us have experienced since the COVID-19 pandemic began when he was designing his new fall 2022 collection.

“I called the collection ‘Victorian Matrix’ because I felt like that’s kind of what we were living in in the past few years,” Siriano said. “Where are we? Are we in this real digital world, like a matrix world, or are we in a Victorian time where we’re back and can’t do anything and can’t go anywhere and we have no resources? So, I had all these elements that I kind of put into the collection and I think it still turned out to be what I wanted it to be, which is glamorous and beautiful and sexy, as I always like to do.”

When designing his collections each season, Siriano likes to stay open to the possibility of finding inspiration from anything that presents itself in his life and sparks his creativity.

“Inspiration really comes from everywhere: a movie I just watched, it can be a piece of art (I’m really into artists and architecture right now, [so] I take a lot of inspiration from that), interiors, (I’m a big lover of fabrics — sometimes one fabric can inspire an entire collection, even) [or] a city I’ve traveled to,” Siriano said. “So, I keep my inspirations as open as possible because I kind of feel like there are no rules and anything can inspire me, which has helped me throughout my career.”

For Siriano, his greatest reward is seeing the joy on his clients’ faces when they connect with the pieces he creates for them.

“I think the transformation for our customer is the best feeling — it really is,” Siriano said. “When we see someone come in and they’re in jeans and a T-shirt and they throw on a spectacular dress and it’s for a friend’s party or a wedding or any event, they’re getting honored somewhere, anything. It’s so wonderful to see the joy of the transformation. They walk out of the dressing room and they’re in this moment and they’re like ‘wow, I feel [like] my best self’ and I think that’s still, for me, the best part of the job.”

Fashion is not the only industry Siriano is setting out to bring his glamorous personal touch to: He and his team have also recently launched new venture, Siriano Interiors, a full-service interior design studio.

Beyond runway collections and red-carpet ensembles, Siriano has also recently gone back to his roots as a self-proclaimed theater kid whose love of costume design initially sparked his interest in fashion.

“We’ve been doing a few costumes for some movies that will come out next year,” Siriano said. “It’s been great. We’re just having fun creating.”

Siriano is also hoping to continue experimenting with more costume design opportunities in the future.

Looking forward to the rest of 2022, Siriano and his team will be hard at work, doing what they do best: connecting with people through the beauty of design.

“We’re opening a new store this year, so that will take up a lot of our time, and I think that will be something exciting to get people [coming] to,” Siriano said. “We were shopping online so much [during the pandemic] and I think we do miss that interaction of going to see things in person, live, and touch fabrics [and] talk to people about the art that we’re doing. So that will be my goal.”