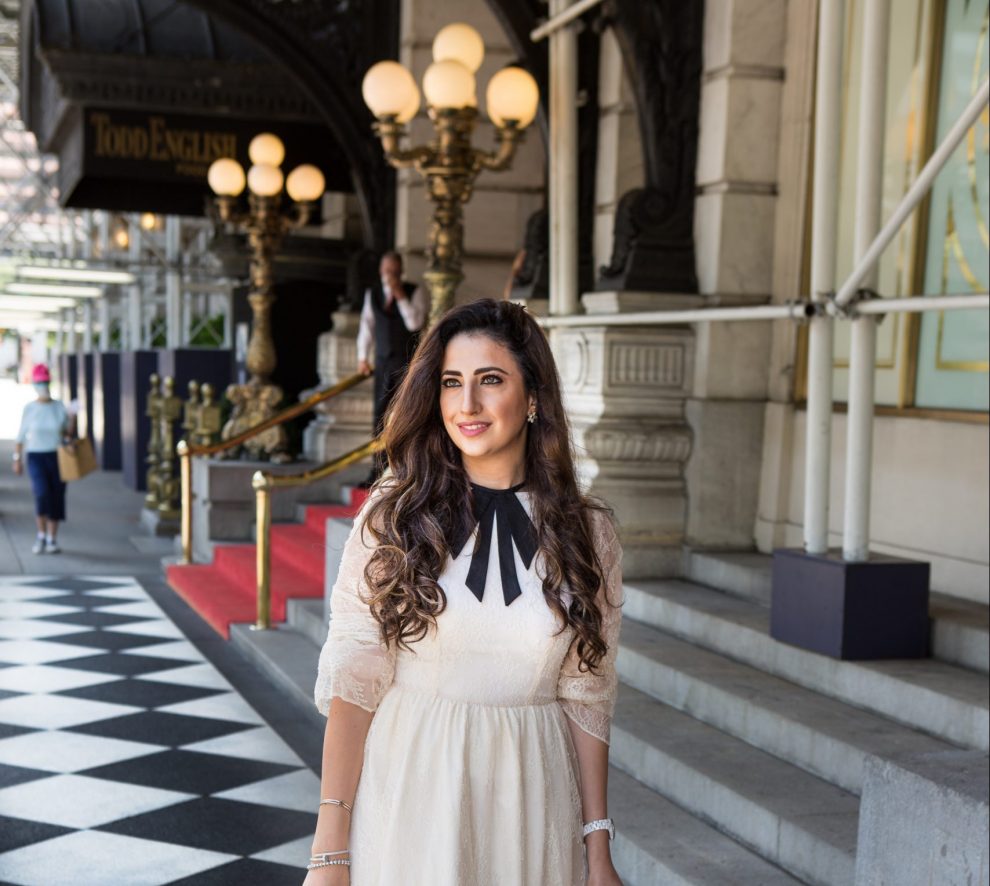 You’ve heard about the “Tinder Swindler” – the con man who bilked countless companies and unsuspecting women out of millions by posing as a scion of the billionaire Leviev family. The bizarre story became a global sensation after being portrayed in a Netflix documentary. Chagit Leviev, the stylish and savvy daughter of the diamond company’s founder and an executive in its business enterprises, has led the family’s response to this unwanted attack, initiating legal action against the scammer and reaching out to the women featured in the Netflix show to collaborate on a jewelry collection whose proceeds will go toward recouping their devastating financial losses.

“These women were courageous enough to go on Netflix and tell the whole world how they were deceived,” said Leviev. “I felt they had suffered enough, let’s help them. Let’s do something together that would bring this to an amazing closure.”

In speaking with Leviev, CEO of the U.S. arm of the multi-billion-dollar international conglomerate Leviev Group of Companies, mother of four, an active philanthropist and an Instagram influencer, it becomes clear that her leadership instincts, compassion and the morals and values that her parents instilled in her have helped her to gracefully deal with such a disturbing situation.

Today, Chagit Leviev is president and CEO of Leviev Group USA, which includes Leviev Diamonds USA, the largest privately held diamond firm to control all facets of the diamond pipeline, from mine to market. It was founded by her father, Lev Leviev, a renowned businessman and philanthropist, who is also invested in real estate, technology and retail, among other industries.

Based in New York since 2012, Chagit Leviev was also CEO of the real estate firm Africa Israel USA, which is behind such prominent Manhattan residential projects including 20 Pine – The Collection by Armani Casa; The Apthorp; District at 111 Fulton St.; 15 Broad – Downtown by Philippe Starck and 88 Leonard St., as well as The Marquis Residences on Brickell Avenue in Miami.

In 2015, Leviev’s expertise in real estate financing, investment, development, asset management and leasing came into play as she presided over the firm’s sale of the former New York Times building in Times Square.

Growing up, Leviev’s family moved between Israel, Belgium and the U.K., and she is fluent in six languages — something she considers an advantage in business. “People shouldn’t gossip next to me in another language because I’m probably going to understand it,” she laughed.

While she always knew she would join the family business, she didn’t necessarily know in what capacity. One of nine siblings, Leviev observed her older sisters’ experiences when they each joined the company.

“You always get judged when you are the daughter of the boss. People consider you incapable, not smart enough, bossy,” she said.

After graduating from Bar Ilan University, she did a round of short internships at various divisions in the company, from Zara to the diamond department. She then decided to work outside of the family business, joining the consulting firm Deloitte to gain knowledge and experience.

It was tough; she often had to work until 5:00 a.m. when there were big projects, and at times she was unable to take days off to join family vacations. “It really gave me good experience on what it is to be just another employee,” she said.

Eventually, an opportunity arose to join the family business in a key position as CFO of Memorand Group, a holding company in Israel. Her father insisted she was perfect for the job despite her protests — she was quite young and had a new baby.

“This is just who my father is. He always throws us into the deep water and trusts us to figure out how to swim out. He told me, ‘You can do it. It’s yours. Good luck,’” she said.

In addition to her role as chief financial officer, Leviev sat on the boards of prominent organizations including apparel company Fox-Wizel and Israel’s TV channel 9.

A Life-changing Move to U.S.

A few years later, her father’s company expanded to the U.S., and he tapped Chagit to take the reins there.

The move turned out to be the biggest turning point in her life. The welcome there was not quite what she expected — facing some resistance, she had to gain control of the company and reroute the way the business had been operating until then.

“I was 25 when I moved to New York, and I couldn’t believe my strength and the capabilities I found within myself. It really turned me into the person that I am today,” she said.

The Leviev family is Orthodox, and even with Leviev’s high-stress job, Shabbat time is devoted to spending time with her family. People often ask how she balances running so many businesses and raising a family while observing Jewish laws, but she does not view religion as something that restricts her.

“I see it as a way to guide me, the way to tell me how to live my life to the fullest and to the best. I take off on Shabbat and close my phone for 25 hours to totally be with my family,” she said. Work has no limit and no end, she added, and being obligated to disconnect from work and be home with the family provides separation and allows her to regain strength and energy for the week ahead.

Her faith is also a comfort — even in business dealings. If, say, a deal that she worked hard for doesn’t pan out, she figures it was not meant to be. “Being a believer, knowing that God has a plan for me, if this didn’t happen, it’s for a reason,” she said.

Believing, she said, helps her overcome failure, appreciate any successes and keeps her humble. “I’m looking at my father, he is a very successful self-made person. He was poor when he was a kid,” she said. His religion keeps him grounded, she added.

“My parents have been together for over 45 years, raising nine kids and now dozens of grandchildren. Family has always been a priority. No matter how busy my father was, and how many countries he was traveling to every week, on Shabbat, he would be back home with all of us,” she said.

As long as Leviev can remember, her father was passionate about charity, making a difference and helping those less fortunate.

“His philanthropic work has been revolutionary, establishing hundreds of schools, community centers, temples, orphanages and hospitals around the world. No business deal in the world excites him as much as charity,” she said. The Heart Center at Sheba Medical Center in Israel is named for her parents.

Chagit is following in her family’s footsteps, keeping the Jewish law of donating a minimum of 10% of her earnings. “Ten percent of what you make is simply not yours, and you have to pass it forward,” she said. She is involved with many charities focusing on community, education and women’s empowerment.

This spring, her family spearheaded a Passover project, not only donating $1 million to needy families to buy food for the holiday but also matching the donations of others, raising a total of $2.3 million. “Having the whole community be a part of the giving, and doing it together is just so much more powerful,” she said.

Encouraging a Jewish education from a young age is a part of the Leviev family’s mission, and in New York they established a free, public school called the Jewish Institute of Queens. The reason: private schools in the city are so expensive that most people cannot afford the high tuition rates.

Over 10,000 students have graduated from the school; because of its success, the Leviev family established a second location and are currently in negotiations for a third location.

Despite her busy schedule, Leviev dedicates her time to many causes as a leader in her community, serving as president of a school and as a board member of various organizations dedicated to advancing women. She is a role model to many who seek to understand how an observant mother, wife and businesswoman can juggle it all, and is a sought-after speaker by women’s organizations, many of which follow her on Instagram as well.

She serves on the board of the Jewish Woman Entrepreneur (JWE) which provides women with resources, education, mentorship and connections to achieve their personal and professional goals.

Leviev is also an active member of Batsheva, which offers motivational support to empower accomplished career women, and in Ezras Nashim, a group of all-female EMTs in the Orthodox community. “They have saved many lives, delivered babies. [The organization] does incredible work, and is something that I love to support,” she said.

Stronger Together: Support for the Tinder Swindler’s Victims

After the courageous women opened up to Netflix about being duped by the scam artist, Leviev decided to take positive action.

“Now they’re talking to the real Leveiv family,” she said. She proposed that the women design jewelry that will be sold on the company’s website, leviev.com, with all net proceeds going to the three women. They called the project “Stronger Together.”

“They are super excited about it. It’s a bracelet with two rings and two diamonds that are interlocked within each other, showing that the world is round and we do come full circle,” Leviev said.

“Stronger Together” also signifies the three women coming together and speaking up, not caring if they are judged for trying to fight for justice for the harm the Tinder Swindler caused them.

“Together they can make a change,” said Leviev. “If they each would tell a story separately, it wouldn’t go as far. No one would believe them. The fact that they all came together is putting a stop to what this guy was doing.”

It was also important to the women that the bracelet be affordable, so everybody could be a part of this movement.