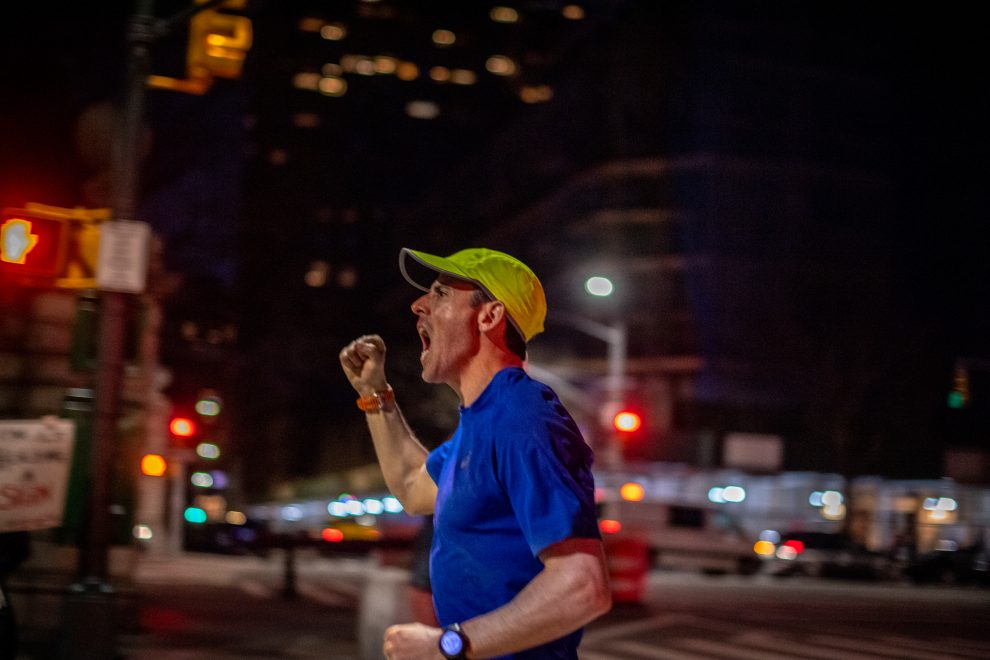 If asked to describe Oz Pearlman, most people would likely detail his work as a mentalist and his appearances on various talk shows to demonstrate his mind-reading abilities as his most memorable traits. However, this spring, Pearlman has been focusing on two of his other passions: long-distance running and charity. In the perfect opportunity to combine the two, on April 8, Pearlman set out to break the world record for the most loops ever run around Central Park in New York City and asked supporters to donate to charity Save The Children’s Ukraine Relief Fund to demonstrate their support.

“The event was a massive success,” Pearlman said. “The pre-existing record for number of loops run around Central Park in a day was 16 laps; I ran 19 laps, which totaled 116 miles [raising] $116,000 dollars for Save The Children Ukraine Relief Fund. Every penny is going to that charity, and they are doing tremendous work for the kids being affected by the horrific war and violence taking place right now in Ukraine, so that’s why I did all this.”

This is far from Pearlman’s first long-distance running endeavor; he has won seven marathons and participated in countless other races of varying lengths. After he initially planned to run a 100-mile race in North Carolina in early April, his work schedule changed, and he needed to be in New York during that time instead. Having already started training for the 100-mile run, Pearlman began thinking of how he could channel his abilities to do some good for others.

“I had been training for that so hard, that I said, ‘I can’t let all this fitness go to waste,’ and I decided to run around Central Park for a day,” Pearlman said. “Initially, I was going to run around Central Park and raise money for a charity related to Ukraine; that was my first thought. And then the rest of it kind of came together when I looked up the fact that there is this sort of world record it’s known as an FKT (or Fastest Known Time) that a guy had done before, and it got tremendous press. The Central Park Loop is very iconic; those 6.1 miles around [are] probably one of the most famous, if not the most famous urban place to run in the world. It’s also where the New York City Marathon, which is one of the biggest marathons in the world, ends.”

Pearlman was delighted by the excited response from the press and the public when he announced his plans.

“It’s not easy; there are some big hills there. But you’ve got skyscrapers, you’ve got nature, you’ve got people, you’ve just got everything you could want in a run that’s just about 10 kilometers, so something about it inspired people,” Pearlman said. “I guess the press got behind it with the fact that so many people feel powerless with what’s going on in the Ukraine and want to find a way to give, and the best way to give right now seems to be with your money. I looked up a bunch of charities, and I’m the parent of three young children, so what’s happening to the kids is really what broke my heart. I decided on Save The Children; they’re very highly rated, four stars across the board by all the charity watchers [and] the vast, vast majority … [of what] you give goes right to the people in need and not administration or parties. It’s really a very efficient charity,” he said.

While his charity selection seemed an easy choice, his preparation process was not as simple.

“Initially I was training for a 100-mile race and that is a unique beast; it’s not really like a marathon, which is 26.2 miles,” Pearlman said. “A marathon, to me, actually sounds like a very quick, short race. I know that sounds nuts! But with a 100-mile race, there are a lot more things that can go wrong: your stomach, the heat, blisters, chafing.”

That contrasts with a marathon, which Pearlman can complete in just under two-and-a-half hours.

“I can kind of ‘make it.’ Even if something goes wrong it’s not a big deal,” he said. “But if you’re going to run in Central Park for 19 hours, from 6 a.m. to 1 a.m., a lot more things factor in. Nutrition is a big one — that you’re eating enough. During the run, I only eat energy gels and I drink Gatorade and water; I don’t do solid meals because my stomach doesn’t do too well with those. Dealing with the heat, dealing with everything that can go wrong, I was training upwards of 100 miles per week getting ready for this. I would go out five, six, seven days a week if I could pull it off — any which way, I ran 15, 20 miles a day. My longest run leading up to this was 50 miles.”

During his training period, Pearlman was frequently on the road doing shows, while also balancing family life.

“A lot of this took place while I was on the road,” Pearlman said. “I land in Palm Springs, I do a 40-mile run; I fly to Omaha, I do a 25-mile run. That’s kind of the story of my life as a parent of three young kids; when I’m home it’s much harder to say ‘Honey, I’m going to go run for four hours,’ but when I’m on the road I can find ways to squeeze it in better.”

Pearlman’s donations came from a combination of clients, friends and more after he emailed his plans, he related.

“This was one of the most unique days of my life because so many people felt invested emotionally, physically, spiritually and monetarily,” Pearlman said. “Everyone came out of the woodwork. People donated 20 bucks, and I know somebody that donated $20,000. People really felt very strongly about this and wanted to give, and during the day, almost the entire 18-plus hours I was running, people were with me, kind of Forrest Gump-style. People just saw it and were like ‘Can I join you?’ and I’d go ‘Yeah, come join the party!’”

This is far from the last of Pearlman’s endeavors to combine his love of running and charity.

“I am definitely chasing the next high. This was so much fun that I’m definitely doing it again,” Pearlman said.

But it was about more than fun.

“Knowing that we helped people in need, and that me doing something as silly as running around Central Park for a day actually led to real good in the world — especially with so many events that are just so horrible — felt really great,” he said. “I think that’s why people latched onto this and why the story has gotten so much press coverage. All you get is bad news nowadays, so if you can go out there and try and do something good, I think it inspires people.”

Pearlman also specified that organizing the event was far less of an undertaking than people may think, and that it doesn’t take a lot of time to make a big impact.

“I literally came up with it over the course of two days,” Pearlman said. “I’ve got running shoes, I can go buy Gatorade and some gels, and that was it. Then I had some friends and family that really came along to support me. My wife went above and beyond. My friend Dustin Emrani was my crew chief. He was incredible, every minute helping me out, cheering me on, doing my social media, getting people to donate more money, and this all just came together.”

Pearlman encourages everyone to find their own unique ways to give to charity, no matter how small or how large.

“It’s the best feeling in the world to give to others, it truly is,” Pearlman said.

Pearlman is planning another similar charity run with an additional fun mentalist twist for this upcoming August, with more details to follow soon.

For more information about Pearlman’s work, visit ozpearlman.com and keep up with him @ozthementalist on Instagram and Twitter. To learn more about Save The Children, visit savethechildren.org.