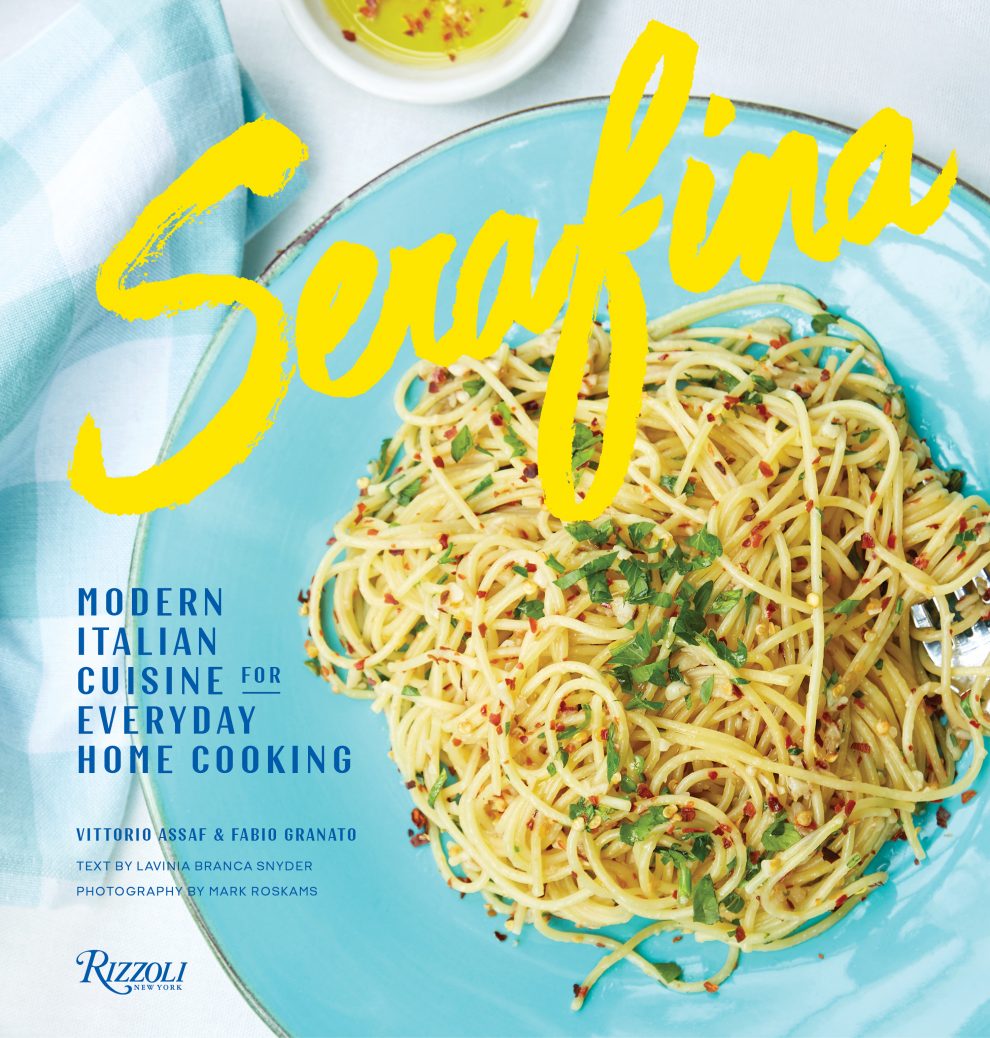 Lost at sea in a small sailboat off the shore of Southampton in 1994, Vittorio Assaf and Fabio Granato conceived Serafina. Managing violent weather and severe hunger, the two stranded friends vowed to open a restaurant serving the best pasta and pizza in the world if they were to survive their ordeal.

In 1995, they fulfilled their promise by launching the highly acclaimed Serafina in New York City. Following its success, they have gone on to open restaurants around the world from Dubai to Japan.

To celebrate its quarter-century milestone, Assaf and Granato share their signature recipes in their first cookbook, “Serafina: Modern Italian Cuisine for Everyday Home Cooking,” with text by Lavinia Branca Snyder. This beautiful collection brings to the table centuries of regional culinary history and local traditions, including knowledge that generations of farmers, fishers, bakers, winemakers and culinary artisans have devoted to their craft. Farm to table is the central tenet of Italian cooking and this is what the two restaurateurs have embraced with passion and joy for the past 25 years.

For over 25 years, Vittorio and Fabio have been visiting the Serafina farm and produce partners in Italy. They hand select and taste the menu ingredients to ensure only the best quality and consistency in their products. They are proud to offer these fine 100% Italian ingredients in all Serafina restaurants.

One such ingredient is their olive oil (EVOO), provided by Tomasso Asaro. The olive oil is a cold pressed high quality extra virgin olive oil produced in Partanna, Sicily. Because of their longstanding relationship with Asaro and the town, the mayor even gifted Assaf and Granato an honorary citizenship! Asaro even donated a 400 year old, secular olive tree in Serafina’s honor. The olive oil is produced in a traditional process called, “Mola,” the classical three gigantic stone wheels that rotates counter-clock with each other in a huge round tub. They utilize a sustainable irrigation system that increases the olive oil quality production, while saving 40% in water consumption. The EVOO is used in many dishes like their baby artichokes, from Puglia which are bathed in the EVOO that they use in their Carciofi E Parmigiano salad. This olive oil has many benefits, including being rich in Polyphenol, the secret ingredient used in beauty creams, believed since Roman times to be the Fountain of Youth, being rich in antioxidants, Vitamin E and Vitamin K , Omega 3 and Omega and Oleic Acid, which can help in reducing chronic diseases and inflammation problems, as well as having anti-cancer properties.

The one hundred delicious takes on traditional recipes are sure to become favorites. Treat friends to antipasti the Serafina way with delicious small plates like artichoke carpaccio with shrimp, arancini with meat and the restaurant’s beloved calamari recipe. Salads like spinach and goat cheese, beet and pistachio and avocado and brussels sprouts sparkle with the season’s best produce. The first course chapter highlights such comfort fare as Farfalle al Limoncello, Gnocchi di Mamma and Risotto with Asparagus. Dishes like Wrapped Bass Fillet with Pinot Grigio, Seared Salmon with Farro and Grilled Filet Mignon with Cristina’s Seasoned Salt bring weeknight dinners and Sunday suppers to new heights. There are Serafina’s world-famous pizzas, sensational side dishes and, of course, dolci (including Torta della Nonna)!

Beautifully photographed and lovingly written, “Serafina: Modern Italian Cuisine for Everyday Home Cooking” is a must-have for home cooks curious to delve deeper into regional Italian cuisine. And it is sure to be a treasured keepsake for the restaurant’s legion of loyal fans.