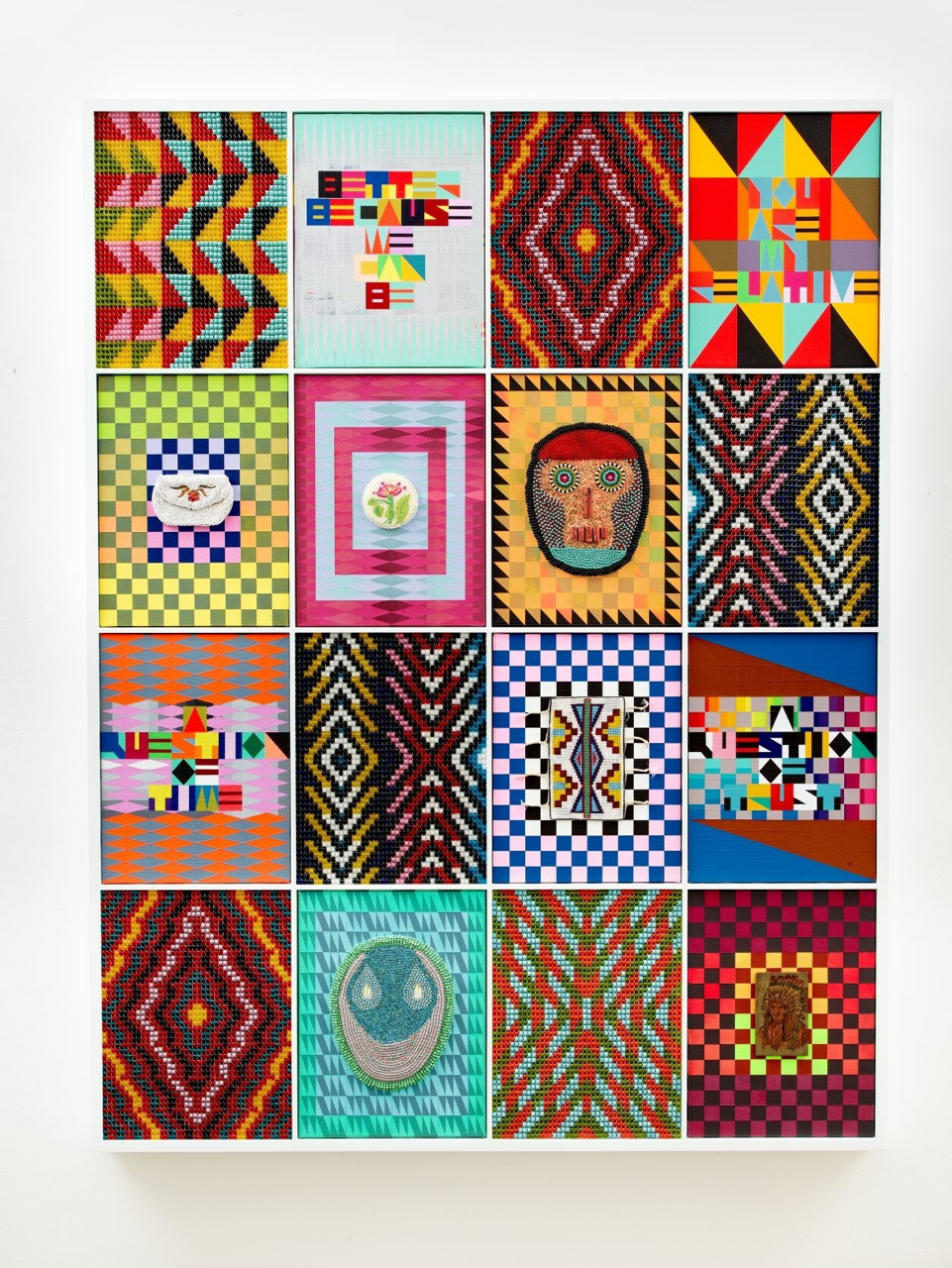 The Frist Art Museum presents Jeffrey Gibson: The Body Electric, a major exhibition devoted to one of today’s leading artists whose multidisciplinary practice combines aspects of traditional Indigenous art and culture with a modernist visual vocabulary. Organized by SITE Santa Fe, The Body Electric will be on view in the Frist’s Ingram Gallery from February 3 through April 23, 2023, and is part of the Tennessee Triennial for Contemporary Art, a program of Tri-Star Arts.

Born in Colorado in 1972, Jeffrey Gibson is of Cherokee heritage and a member of the Mississippi Band of Choctaw. His vibrant work, which is represented in more than 20 permanent collections across the United States, calls for Indigenous empowerment, Queer visibility, and environmental sustainability. A 2019 MacArthur Fellow and recipient of a “genius grant,” Gibson is recognized for spotlighting “outsider-ness” through a celebration of nonconformity and the power of self-expression.

The Body Electric features Gibson’s recent paintings, sculpture, video, and installations, along with a large site-specific mural. The title of the exhibition is inspired by a song written for the 1980 movie musical Fame, which drew from the 1855 Walt Whitman poem “I Sing the Body Electric” from Leaves of Grass. Lyrics such as “And in time…we will all be stars” reverently acknowledge our place in the natural world, while honoring the universality of endings and beginnings.

A highlight of The Body Electric is She Never Dances Alone, a video honoring the jingle dress dancers who gathered to defend Standing Rock Reservation from the construction of the Dakota Access Pipeline in 2016. Originally commissioned by Times Square Arts in 2019 for their 2020 Midnight Moment series to be screened across seventy massive monitors in New York, this captivating piece (adapted as a nine-channel video for this exhibition) shows Eastern Shoshone/Northern Arapaho performer Sarah Ortegon dancing to the song “Sisters” by musical group The Halluci Nation (formerly A Tribe Called Red). “Ortegon’s movements link her to a dynamic legacy of dancers and remind viewers that dance has long been a powerful tool of resistance and protection in Indigenous cultures,” writes Caoba.

The immersive installation of the three brightly colored sculptures Red Moon, Desert Sky, and Red Sunset appears as hanging columns made from the kind of nylon shawl fringe commonly found on Native dancers’ regalia. “In this exploration of the material, Gibson repositions fringe from a supporting role to the primary medium, a shift that reflects his interest more generally in centering people and narratives that are often not prioritized,” writes Caoba. “Although the fringe is arranged to evoke bold, solid, monolithic forms, Gibson notes that when the material shifts in response to its surroundings and people moving around them, ‘There is a human quality to the fringe in movement.'”

The exhibition features freestanding sculptures, including one of Gibson’s signature Everlast punching bag works. Caoba explains that Gibson “believes that covering the punching bag, a target of repeated violence, with bead work ‘Indigenizes’ it and transforms it into something beautiful. In doing so, this act aims toward repairing the ruptures caused by colonialism and places agency back into Indigenous hands.”

Stylized text plays an important part in Gibson’s practice. Often addressing environmental or social concerns, the short, powerful, and lyrical phrases come from various sources. Sometimes Gibson writes the words himself, as he did for THE LAND IS SPEAKING|ARE YOU LISTENING, which expresses frustration with those who recklessly abuse and neglect our ailing planet. In other instances, the phrases come from songs by artists ranging from Culture Club to Stevie Wonder to Frankie Valli. This exhibition includes paintings, prints, and sculptures that contain such phrases as “THE FUTURE IS PRESENT,” “I AM A RAINBOW TOO,” and “KNOW YOU’RE MAGICK BABY.”