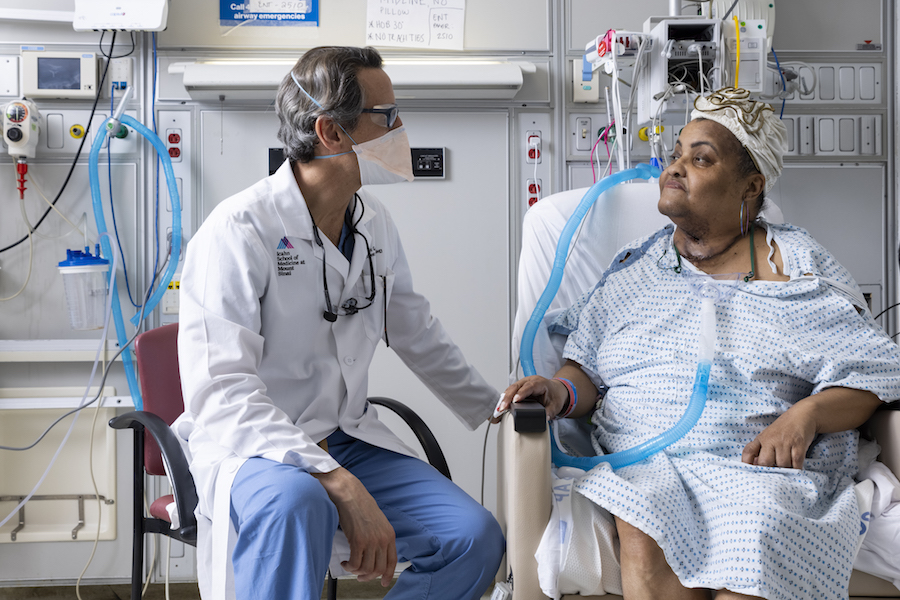 It was a surreal moment for Eric M. Genden, MD, MHCA, FACS. Entering the operating room at The Mount Sinai Hospital on January 13, he was about to attempt something he had been planning for more than 30 years — something that many medical and scientific experts had long argued was impossible. He was going to lead a team of specialists — surgeons, nurses, anesthesiologists and residents — in the world’s first human trachea transplant.

Genden, the Isidore Friesner professor and chair of otolaryngology – head and neck surgery for Mount Sinai Health System, was struck by the prevailing sense of calm in the room, as if this was a routine procedure, and by the fact that so many highly-trained individuals were on hand despite just a half-day’s notice. He also reflected on what was at stake. Once the donor was opened, Genden knew there was no turning back. If the donor trachea did not look viable, or if anything went wrong, there was no textbook to fall back on. Just the expertise in the room and the protocols he had developed for this historic undertaking.

What happened over the course of the next 18 hours was something Genden described as “just shy of a miracle.” But, ultimately, it was the result of a bold vision, extensive planning and the support of a team with extensive surgical expertise in organ transplantation and tracheal reconstruction. They made the impossible possible.

Where It All Began
The first time Genden thought about challenging the scientific dogma regarding trachea transplants was 1989. He was a medical student at Mount Sinai, and he had lost a young patient who had a tracheal tumor that was too large to be removed.

“Dating back 100 years, extensive defects of the airway have been problematic,” Genden explained. “We saw this with diphtheria, polio and, now, COVID-19. If you had a short-segment defect of five centimeters or less, you could cut it out and put it back together like a piece of pipe. But if you had a longer-segment defect, like this patient, there was nothing you could do.”

Had Genden accepted that as an immutable fact, the story would end there. But he began researching every attempt at long-segment tracheal replacement to understand why they failed. Eventually, he identified three crucial factors for success. First, the replacement could not be rubber, plastic or metal. It had to be made of human tissue to prevent hemorrhaging. Second, the donor trachea had to have functioning mucosa cilia — microscopic hair-like structures inside the trachea that clean the lungs and prevent obstructions from developing. Third, the replacement had to be rigid enough not to collapse from the pressures of breathing.

“The trachea was the Rodney Dangerfield of organs; nobody really gave it much respect,” Genden said. “Everyone thought it was just a tube. But replacing the trachea with just a tube does not work, and it typically ended with patients dying. In the end, you simply cannot rebuild so much of what we are born with.”

The answer, he decided, was tracheal transplantation. The question remained as to how it could be done.

A Blueprint for Success
Over the course of his extensive research, Genden kept coming up against the same significant hurdle: arranging blood supply to the transplanted trachea. The experts agreed it was not possible. But he believed otherwise.

He began studying tracheal blood flow in animals and, with the support of a National Institutes of Health grant, launched a laboratory in 1990 to explore the immunology and biology of the trachea. Since blood flows from the carotid artery into the thyroid gland and then the trachea, he and his colleagues realized the entire gland would have to be transplanted, as would the esophagus, to ensure the survival of the trachea. Meanwhile, studies of tracheal transplantations in mice revealed that, unlike with other transplants, the recipient’s cells grew into the transplanted organ. These insights suggested that a tracheal transplant could be done successfully.

By 2011, state and federal authorities were starting to accept and establish regulations for transplanting multiple organs together with their blood supply, known to scientists as “vascularized composite allografts.” This would facilitate transplantation of the trachea and its related organs. Encouraged by these developments, Genden approached the Recanati/Miller Transplantation Institute at Mount Sinai to make his vision a reality.

Refining a Groundbreaking Technique
When Sander Florman, MD, first heard Genden’s concept for tracheal transplantation, he was skeptical. As director of the Recanati/Miller Transplantation Institute, he had heard his share of ideas for new procedures addressing unmet needs. But the more he listened to Genden’s idea, the more impressed Florman was.

“He was thoughtful, diligent and well prepared, and it was clear to me that he deserved the opportunity to pursue this,” Florman, the Charles Miller, MD professor of surgery at the Icahn School of Medicine at Mount Sinai, said. “But he needed to refine his surgical technique in humans before we could proceed.”

After securing permission from the families of recently deceased people through LiveOnNY, an organ and tissue bank serving the greater New York City area, Genden tagged along with the Mount Sinai transplant team to procure tracheas without the intent to transplant. This enabled him to finesse his technique for removing the trachea and the blood supply and to conduct dye studies to see whether the blood vessels would feed the thyroid, thus ensuring the survival of the trachea. All signs pointed to yes.

“He did this more than 10 times, often at two in the morning with our liver transplant team,” Florman said. “That technique he developed, which preserves a portion of the esophagus with the blood supply, was the secret sauce that made it possible to do trachea transplants reliably, reproducibly and safely where others had failed.”

The procedure was perfected. The internal review board approvals were secured. And LiveOnNY had agreed to transfer a donor to Mount Sinai when the time was right. All Genden needed was the right patient to receive the transplant.

Living in Fear
For six years, Sonia Sein had been living with the fear that she might go to sleep and not wake up or that her tracheostomy tube could suddenly fall out, causing her to suffocate.

The 56-year-old New Yorker had developed an eight centimeter-long, segment cricotracheal stenosis — the result of tracheal damage from being intubated for an asthma attack and from subsequent reconstructive surgeries that caused further damage. She underwent a tracheostomy to maintain her airway through a hole in her throat, but everyday activities — leaving her house or playing with her grandkids — became high-risk for her.

“Long-segment tracheostomies are fraught with problems,” Genden said. “They tend to clot; they tend to plug, and if the tube falls out, you suffocate, because there is no way to get it back in. Sonia lived in constant terror that this could happen to her.”
That fear was a motivator for Sein to enroll in Genden’s human tracheal transplant trial. If the procedure was successful, she could regain a life without constant limits and uncertainty.

“Being a social worker, Sonia was well aware of what goes on in the medical field and very much in touch with the realities of this decision,” Genden said. “She knew that there was a chance that she would not wake up from the surgery. But she was absolutely determined to do something about her situation, and that made her an ideal candidate.”
Her resolve never once wavered. “I called Sonia and her family the night before the procedure to reassure myself that this is what they wanted to do,” Genden recalled. “She was ready to go.”

The Moment of Truth
In the operating room, Genden and his Mount Sinai colleagues quickly determined that the donor trachea was viable and that they could proceed with transplantation. Following the protocols Genden had developed, the team removed the donor’s entire trachea; the entire thyroid, including both the superior and inferior thyroid vessels; the esophagus and the associated feeding arteries. Once these had been dissected and prepared on a side table with a microscope, the team brought Sein in, removed her diseased trachea and performed a series of microscopic surgeries to connect the small blood vessels that nourish the donor trachea with her blood vessels, working quickly to reduce the risk of hemorrhage and infection. The moment of truth was at hand.

“In all the years that I have been practicing head-neck surgery, nothing has been more exciting than releasing the blood vessels and watching the entire length of the trachea bleed because I knew it was well vascularized and alive,” Genden said. “In that moment, 70 years of medical dictum went out the window. We proved it was possible to revascularize the trachea, and that was an amazing achievement.”

It is an achievement that Genden noted would not have been possible without considerable support and encouragement. He acknowledges Mount Sinai’s leadership for backing him every step of the way; Florman, who trusted him to perform the procedure; Samuel DeMaria, Jr., MD, professor of anesthesiology, pain and perioperative medicine and otolaryngology – head and neck surgery, who was the procedure anesthesiologist; the Transplant Intensive Care Unit, which cared for Sein; Amy Friedman, MD, chief medical officer of LiveOn New York, who helped procure the donor and Sein, for her strength and confidence.

A Remarkable Development
Having successfully implanted the trachea, the next goal was to prevent rejection. Drawing on Mount Sinai expertise that spans more than 10,000 transplant procedures, Genden developed a new immune suppression protocol, starting with pre-surgery induction therapy of a drug called antithymocyte globulin. Postprocedure, Sein remained intubated for six days and was treated with triple-therapy immunosuppression, which included the medications tacrolimus, mycophenolate mofetil and corticosteroids. In the weeks that followed, Genden noticed that Sein’s cells were growing into the graft, just as had happened in the lab mice.

“The cilia that line the trachea produce an epithelium [a protective layer] that prevents particles from getting into the lungs,” Florman explained. “That epithelium turns over with some frequency, which is why Dr. Genden observed recipient cells growing into the transplants in the animal models. In the initial postsurgery biopsies, the cells were donor cells, which we were able to identify because the donor was a man. In the most recent biopsy, the cells were almost 7% Ms. Sein’s. This suggests that, over time, we could reduce her immunosuppression, which I think is remarkable.”

A Promising Future
Genden continues to monitor Sein’s progress. There have been no complications, no signs of rejection and no risks of suffocation from progressive airway disease. She is eating, getting out and playing with her grandchildren. She is also able to take a deep breath — something most of us take for granted.

“There are only a few centers around the world that have the depth and ability to do this,” Florman said. “At Mount Sinai, we have a long history of pushing the limits, being innovative and helping patients who may not have an opportunity elsewhere by bringing concepts that are well-grounded in science to reality. I’m proud of our team at the Institute for being able to collaborate with Dr. Genden in achieving this first-ever human trachea transplantation.”

As for Genden, he has barely had time to catch his breath. Having made history, he is now focused on the future, which means improving the procedure protocols, sharing his findings and advancing the field so that any surgeon trained in vascular surgery can offer trachea transplantation to their patients. He has also launched Mount Sinai’s Trachea Transplant Program, which will enable him to treat patients worldwide, particularly the growing number of patients with extensive tracheal damage following COVID-19, making this breakthrough very timely.

“This development forever changes the standard of care for organ transplantation,” Genden said. “For the first time, we are able to offer a viable treatment option to patients with long-segment tracheal defects. And that means we are able to give them something they previously did not have: hope for the future.”